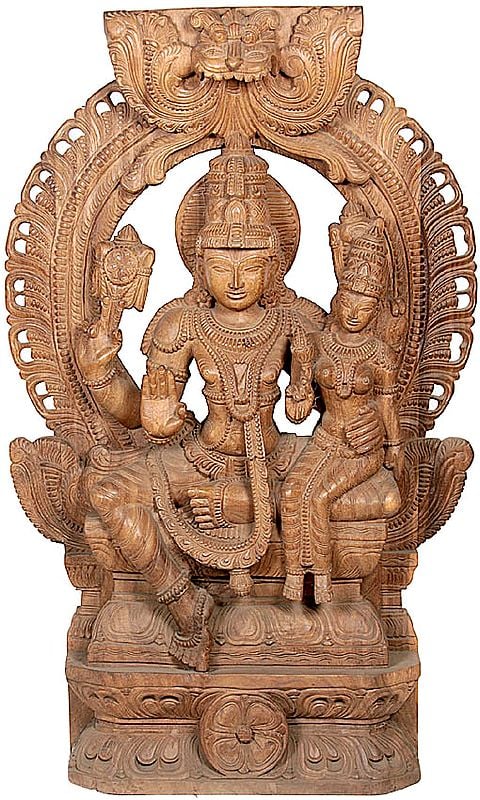 $695
Quantity
Notify me when this item is available

Free delivery
This great masterpiece, carved from fine wood – less fibred, sandal wood like soft and rich in its natural colour and ivory like compact revealing every desired detail with rare precision and accuracy, represents Lord Vishnu with his consort Lakshmi seated on a high lotus seat. Vishnu’s seat has been installed on a podium with greater breadth and length consisting of lotuses giving it proper height perspective and base also for the ‘prabhavali’. Besides the lotuses used in its rising, the podium has in its centre a four-petalled floral medallion : a symbolic form of lotus, relieving its monotony. This abundance of lotus forms, a characteristic feature of Vaishnava iconography, particularly when it portrays Lakshmi, continues in conceiving his seat’s backrest as also the ‘prabhavali’, the primary frame of which consists mainly of lotus-motifs.

The statue represents Lord Vishnu’s robust figure with a meditative frame of mind : the outward vastness and the inner depth combined, as enshrining the ‘prabhavali’, the symbolic form of the sanctum, and thereby, of the cosmos. Lotus, which Lord Vishnu has as his seat, and which Lakshmi : goddess of prosperity, fertility and abundance, holds in her hand and thus covers by her benevolence, is only the other symbol of cosmos. With such symbolic breadth, far more than mere portrayal of the divine couple, the artifact might be seen as representing Lakshmi’s benevolence and Vishnu’s desire to protect and preserve and pervading the cosmos.

Its mystique and symbolic breadth apart, the sculpted forms of the divine couple are simple. The four-armed figure of Lord Vishnu has been represented as seated in ‘lalitasana’, the posture of sitting with right leg laid suspending down the podium level, and the left, lying horizontally along the floor of the seat. He has on his forehead the mark of Vaishnava ‘tilaka’, on his head a tall crown, typical to his icons, and behind it a halo of moderate size. Of his four arms only two on the right are fully visible, while those on the left, only partially. In the upper one of those on the right he is carrying ‘chakra’ – disc, while in that on the left, ‘shankha’ – conch, his essential attributes. Represented in highly stylised forms, both, ‘chakra’ and ‘shankha’ reveal another set of symbols, ‘chakra’ also assimilating a form of ‘padma’ – lotus, and ‘shankha’, that of the ‘pasha’ – noose, Lord Vishnu’s other attributes. By his normal or lower right hand he is imparting ‘abhaya’ – freedom from fear, while by its counterpart on the left he is supporting Lakshmi and clinging her close to his bosom. Thus, if anything of the essential attributes of his iconography, mace alone is missing.

As texts and iconographic traditions provided, Lakshmi has been represented as seated on Vishnu’s left thigh. She has been conceived with normal two arms, a composure defining both, her figure and mind, well moulded breasts, narrow waist, recessed belly and heavy hips. She is holding a lotus in her right hand, while the left has been let loose, symbolic of release or deliverance, which in her case, besides denoting her power to absolve from the cycle of birth and death, is suggestive of her absolute submission, a state of being she attains by releasing her mind from ego. She is also putting on a towering crown identical to Vishnu’s, though the halo is missing. Both figures are ornamented almost alike and have been conceived with alike sharp features, large eyes in meditative trance, broad foreheads and round faces. Though elegantly designed with bands and pleats, like Vishnu, an ‘antariya’ alone, is Lakshmi’s wear; however, while Vishnu’s has a breadth down to ankle, her ‘antariya’ has greater breadth descending down to the feet level.