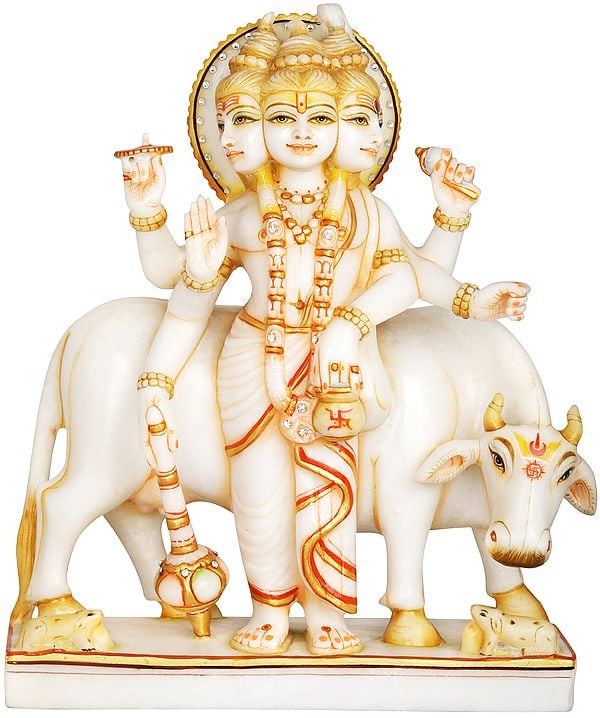 $1395.00
There is much to Lord Dattatreya that sets Him apart from the rest of the Hindu rshees. An ascetic of the finest order and lord of yoga, He is said to have been born of unwed parents and taught by twenty-four natural elements as opposed to a traditional guru. Possessed of a sharp mind and a resilient body, Lord Dattatreya is said to have traversed the Western Ghats for years in His quest for yoga, and contemplated upon the Gandhamadana mountain into samadhi.

The murti of Lord Dattatreya that you see on this page is in keeping with His traditional iconography. Without a cow and atleast another animal, the same is incomplete; together with the discus and the conch, it conveys the many Vishnu-like qualities of Lord Dattatreya. He is trimukhadhari (the one possessed of three faces) and shashabhujadhari (the one possessed of six arms). In the left anteriormost hand He holds a kamandalu, an integral aspect of a life of committed asceticism.

The murti has been sculpted from pure marble, giving the composition a predominant white colour. The same is infused with strategic bits of gold and red - such as the radiant brow of the Lord, the long hemline of His dhoti, and the horns and hooves of the cow behind Him. It has turned its face to the front, adding to the dynamism of the work. Each of the faces of Lord Dattatreya bears a composure of supreme intelligence and self-withdrawal.