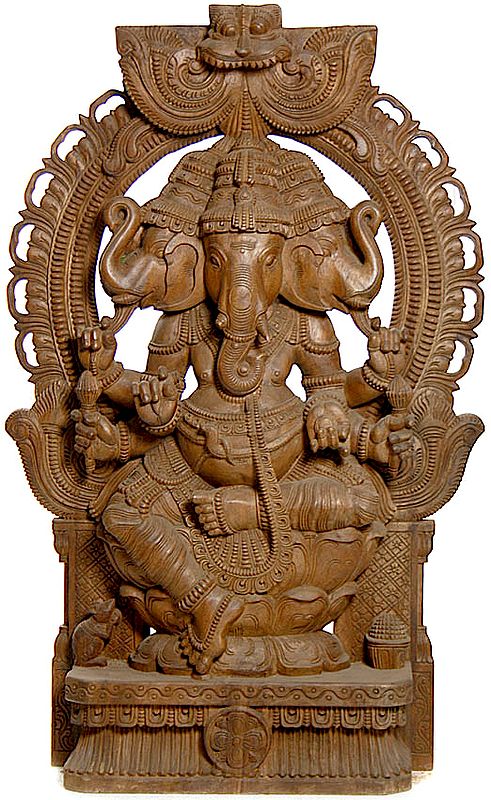 $2250.00
This item can be backordered
Time required to recreate this artwork
20 to 24 weeks
Advance to be paid now
$450.00 (20%)
Balance to be paid once product is ready
$1800.00
Notify me when this item is available
Save to Wishlist Send as E-card Share by Email
One of the great masterpieces of the art of wood-carving from India’s Southern part where art and creativity is still the idiom of common man’s life, this brilliant image carved out of a single piece of Bangai wood, one of the finest kind of timber for carving world over growing in a particular region in Tamilnadu, represents Lord Ganesha in his Tri-mukha – three-faced, manifestation. The artifact, an example of exceptional craftsmanship, portrays Lord Ganesha in contemplative mood. His half-shut eyes apart, the composure on his face and the perfect poise that enshrines his entire figure suggest that his mind is deeply set within him as if exploring solution to some cosmic riddle.

The statue represents Lord Ganesha in his three-faced manifestation, one in the centre while other two, carved in perfect symmetry and with identical demeanour, on either side flanking the face in the centre. His trunks on the sides are upwards raised while that in the centre is laid downwards suggesting that he pervades all spaces, above him and below. All three trunks are beautifully twisted dispelling on one hand the monotony of a dull straightened length by their rhythmic curves, and symbolising, on the other, his complete hold over ‘ganas’ – discordant cosmic elements, and his command of entire knowledge and riches. When consecrated facing, the great Lord bestows his bliss from all sides, and when, with his back, he provides a security cover against all dangers and commands every calamity from whichever direction it comes.

A simple multiplication of his three faces, Lord Ganesha has in this statue six arms carrying in two of them, the upper-most on two sides, nooses, and in the two in the middle, battle-axes. In the right one of the lower-most, he carries his broken tusk, and in that on the left, a laddu. In adherence to the principle of symmetry – the unique distinction of the image, the artist has conceived on both sides not only the identically shaped and gesticulated hands but has also repeated at least in two sets of them the same attributes : noose and battle-axe. This cult of carrying two numbers of the same weapon is in stark contrast to his usual images that have a different attribute/weapon for every hand. Except different attributes in two normal hands, different positions of the two legs and different icons carved at the Prabhavali’s foot, the figure of his mount mouse on the right and a basket of laddus on the left, the statue’s right and left halves : anatomy of the image, structure of the Prabhavali, pedestal and even Kirtti-mukha, have been conceived identically and in perfect symmetry.

The image of the elephant god has been installed in a Prabhavali, which imparts to the divine image a magnificent frame, and to the whole statue, rare beauty. The Prabhavali consists of three parts, an architectural base-part composed of two half pillars and lotus-brackets, a middle part comprising two half circles made of conventionalised lotus motifs, and a Kirtti-mukha with well moulded whiskers, on the top. The figure of Lord Ganesha has a well defined anatomy, sharp elegant features, tender face, fine fingers and as much fine nails. He wears on his three heads tall crowns but not so spiral as the South Indian icons usually have. His elegantly pleated antariya and sash and ornaments, a few but gorgeous, impart to his figure further beauty. A snake tied on the belly to support it, besides a belly-band, is quite interesting.