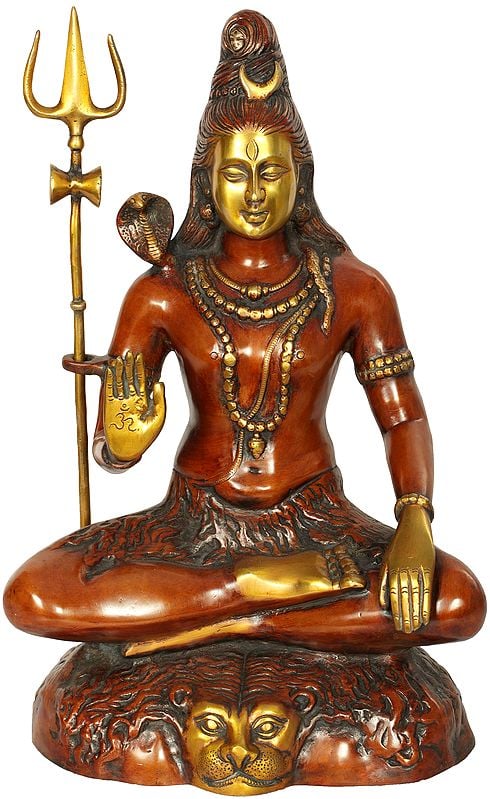 $695.00
FREE Delivery
Bestseller
(Rated 5.0)
Quantity
Ships in 1-3 days
Notify me when this item is available
Post a Query
This brilliant brass-cast, with selective parts anodized in deep maroon abounding in great lustre leaving the rest for revealing gold-like resplendence and far greater beauty in mutual contrast, represents Lord Shiva as engaged in ‘yoga’, one of his earliest reported forms subsequently classified in the Shaivite iconography as Yoga Dakshina-Murti or Yoga-Murti Shiva. The image also combines two other aspects of his being. He has been represented as granting ‘abhaya’ – protection against everything untoward, and the image also incorporates some elements of Bhairava iconography, the garlands and arms-bands of skulls and skin-colour suggestive of ‘Bhashma-arti’ – ash-smearing ritual performed at every Jyotirlinga shrine before day-break at about 4. 00, in particular. Bhairava is Shiva’s independently worshipped manifestation or rather the only iconic or anthropomorphic form in worship with independent shrines dedicated to it and a set of widely different worship rituals. The most sacred of all Shaivite worship rituals, and their essence, ‘Bhashma-arti’ is a privileged occasion to be a part of. These elements obviously impart to the image far greater divinity.

Shiva’s other iconic manifestations : Uma-Maheshvara, Lakulisha, Vrash-vahana, Tripurantaka … are widely represented forms of his image but hardly ever enshrining a sanctum. His wider worship centres on Shiva-ling icons, his aniconic manifestation, now in worship for over five thousand years and enshrines all twelve Shaivite seats, the Jyotirlingas. Excavations of several Harappan sites have revealed a number of votive Shiva-ling icons suggestive of Shiva’s aniconic worship cult prevalent those days. These sites have also revealed his anthropomorphic icons representing him as engaged in ‘yoga’. This form of Shiva has been identified as Mahayogi Shiva, perhaps the predecessor of the Puranic ‘Yoga Dakshina-Murti’ form in which he has been perceived as the great master of Yoga. Astonishingly beautiful this brass-statue represents him not merely as engaged in ‘yoga’ but having mastered the science the ‘Dakshina-Murti’ Shiva also employs an aspect of his being in demonstrating ‘yoga’ and assuring of its great merit.

Characteristic to Yoga-Murti or Yoga-Dakshina-Murti iconography, a form that mandates suspension of all acts of body and manifests meditative quiescence enabling the ‘eye’ to descend within, Lord Shiva’s form has been conceived with normal two arms, not the usual four, one revealing a posture subordinate to Yoga, and other, illustrating assurance which a Master alone could simultaneously undertake. It is thus that one hand held in ‘abhaya’ is often included as one of the features in the Dakshina-Murti iconography. Except the symbolic trident hung upon his right arm he does not carry any attribute suggestive of an act. Different from the later variant of Dakshina-Murti imagery representing the great master as seated with the right leg laid suspending over the figure of Apasamarapurusha, this statue adheres to the cross-legged, or rather ‘padmasana’ posture of Indus Mahayogi form.

An exceptionally balanced form, the figure of Shiva has been modeled with delightful anatomy and childlike innocence enshrining his face. The image has been cast with a round face and well defined features : sharp nose, cute small lips, semi-drowsy eyes, sensitively treated chin, cheeks and forehead and subdued form of the third eye. His long gold-like lustrous hair are alike beautiful and elegant either when knotted into a coiffure or when falling and laid on shoulders. Snake is an essential feature of his imagery but the snakes’ enormity, a number of them crawling all over his figure, is not the feature of this image. It has a single one, though prominently conceived, laid around the neck – a mere symbolic presence. In place of large size prayer-beads on the neck – the usual feature of Dakshina-Murti imagery, the statue has a pair of skull garlands and armlets laid around the neck and arms. These skull-garlands, the attribute of Bhairava, afford to his form in this statue further dimensional breadth. He has tiger skins for both, his loincloth as also for his seat. To let the jata-juta reveal its beauty and lustre the artist did not crowd his coiffure with many symbols and has used only the crescent form to adorn it.