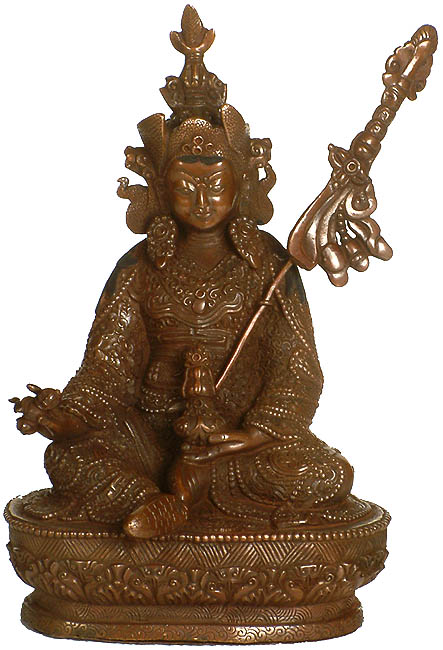 $375.00
Notify me when this item is available
Save to Wishlist Send as E-card Share by Email
Rinpoche, or Padmasambhava, a historical figure who lived in the eighth century, was a renowned Indian scholar and tantric master. Tibetans usually call him Guru Rinpoche, or Precious teacher, and consider him as a second Buddha. He is highly revered in Tibet by all four great Buddhist sects. Statues and paintings of him are found in every Tibetan monastery, and his teachings are followed especially by the Nyingmapa.

He sits cross-legged on a lotus base and is wearing a scholars hat with a half vajra and a peacock feather on top. He holds a vajra in his right hand and a vase in his left. Tucked in near his left shoulder is his trademark khatavanga.

Although a voluminous literature has evolved around the legendary life of Padmasambhava, as a historical personage not much is known about him. All that can be said with certainty is that he was an inhabitant of Uddiyana (identified with the present day Swat valley in Pakistan) and was invited to Tibet by King Thisong Detsen (756-97?).

Padmasambhava was renowned as a Tantric priest and was invited specifically to tame the demons, presumably of pre-Buddhist religions, who were obstructing the path of Buddhism in Tibet. Evidently, he accomplished the task and returned to India, but there is no agreement either about the duration of his sojourn in Tibet or about his other accomplishments.

Click Here to View the Reverse of This Sculpture. 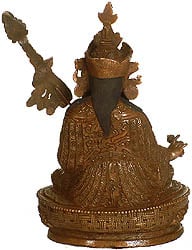