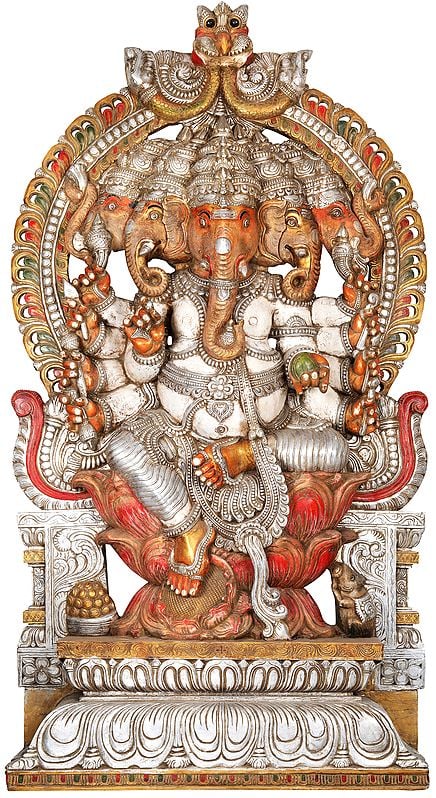 $9995.00
(Rated 5.0)
A panchamukha Lord Ganesha, after the style of South Indian temple architecture. ‘Pancha’ is Sanskrt for five, ‘mukha’ for faces. The panchamukha roopa (manifestation) of Lord Ganesha deviates from His usual iconography as a baala-deva (child-deity) whose personality is marked by childlike innocence and wisdom. Instead, the pancha mukha of the Lord Ganesha that you see on this page are the five faces of a well-rounded warrior, son of the destructive Shiva and the powerful Durga, the all-powerful prince of paraloka (heavenly realm of existence).

A murti as grand as this occupies pride of place in a South Indian temple of yore. It depicts Lord Ganesha with ten arms - He is dashabhujadhari, the one possessed of (‘dhari’) ten (‘dasha’) arms (‘bhuja’) - eight of them wielding weapons that reiterate His status as divine warrior. In His anteriormost hands are the broken tusk and a freshly made laddoo, which are indicative of His scholarly authorship of the Mahabharata and His childlike predilection for dessert.

A lotus of richly coloured pedestals is His throne. The silver of His sashes and jewellery that descend upon it serves to bring out its gorgeous colour. The same is flanked by the mouse-vahana and a bowlful of golden laddoos. A broad-based platform of an upturned silver lotus, and an aureole of gold lotus petals trimmed with red and green pastel tones. A beady-eyed Kirtimukham at its zenith completes the composition.