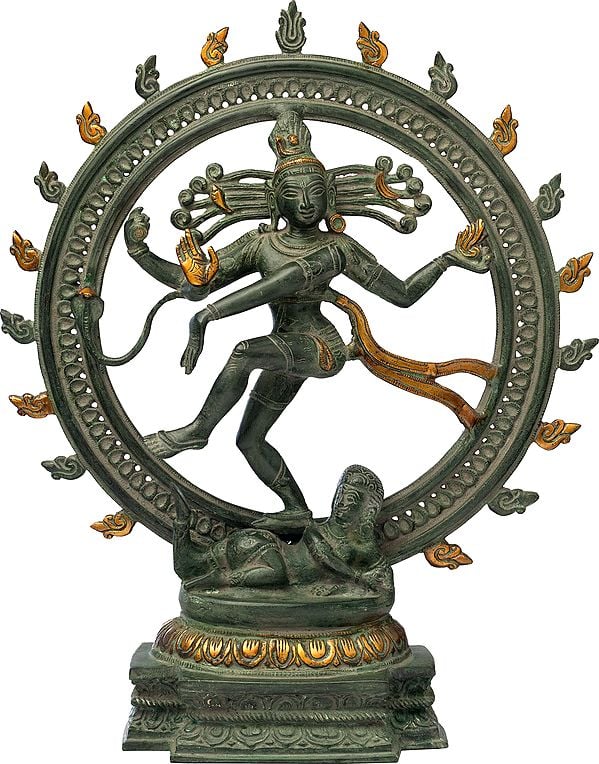 This is a brass statue of Nataraja, depiction of the Hindu god Shiva, as a cosmic dancer. Nataraja means, the lord of the dance. It is the only form of Shiva worshipped as a human figure. This dance style is known as Tandava. It is the dance of destruction, aggression, creation, solace and liberation from the evil aspects.

Nataraja is depicted having two legs and four arms in the posture of dancing. Right hand is in Abhaya Mudra, blessing for fearlessness and left hand is just below the right hand pointing downwards to the right foot, symbolizing that, one who takes refuge at Lord’s feet, shall have nothing to fear about. Other two back hands have fire and drum (damru) respectively. Drum signifies the sound that is responsible for further creations and fire represents the process of destruction of the world at the time of cessation. The venomous snake coiled on his right arm and neck indicates the death of evil. His legs are slightly bent, where left leg is raised from the ground in a dancing posture and right leg is placed on the demon, Apasmara Purusa who signifies ignorance. His hair is spread out in individual strands on both sides marking for vigorous power. The Crescent Moon on the left represents the change of universal time and a conch is also present in the right side of the hair. He is wearing a Tiger skinned apparel, representing victory over his desires. He has three eyes representing past, present and future. The third eye shows knowledge and truth. The elegant smile on the face is showing his calmness and focused energy.

Nataraja is dancing in an exquisite two layered circular ring with a circular chain of small drop like pellets in between. The ring is surrounded by bright cosmic flames. This wondrous circular ring is called Prabha Mandala, emitting universal flames that can create and consume everything. This sculpture is placed on an inverted lotus, which is kept on a beautiful three layered plus shaped pedestal. This heavenly frame around the statue of Nataraja is making it more statuesque.