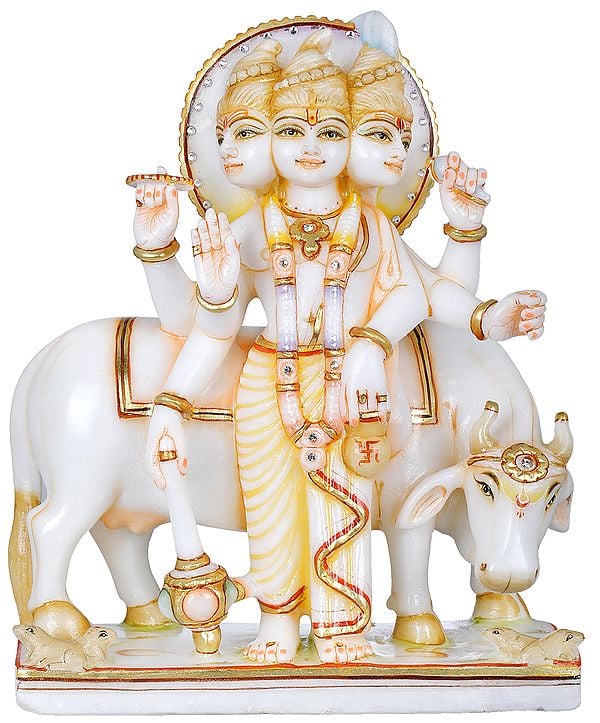 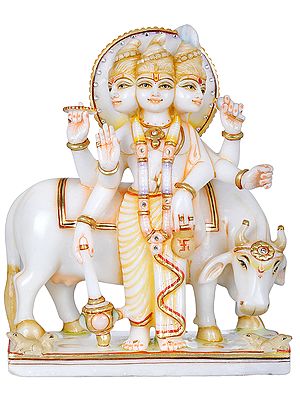 A unified avatar of supreme Hindu Trinity, Brahma, Vishnu and Shiva; Lord Dattatreya was a great teacher or Guru principle in the universe who incarnates as per time and need in any plane of existence. He was the son of a great sage Atri and his consort Anusuya; Datta means ‘to give’ and Atreya means ‘Atri’s son’. It is said that the trinity submerged and gave themselves to Atri in the form of his son, having a unique look of three heads and six arms and always accompanied by four dogs and a white cow.

The statue shown here is carved out of a single piece of marble fulfilling all attributes of his iconography in extensive beauty and accuracy. He stands here on a rectangular pedestal with the front right hand in Abhaya and left holds a kamandalu, the middle pair of hands hold a stylishly decorated mace (gada) while the other hand is in a gentle posture and the topmost pair carries a conch and disc respectively; garbed in alluringly frilled yellow dhoti highlighted with a glowy red border, large stone studded aureole enhancing his divinity and a long flower garland adorns his neck. Zoom in to appreciate the calm and composed smile, perfectly chiselled nose, intense golden-brown hued eyes and bright golden hair decorated with elegant accessory.

The four dogs on either side of the pedestal represent the four vedas or the four yugas and the holy cow behind him is symbolic of Mother Earth and abundance. Look carefully at the three faces, left is of Lord Shiva, centre one is Vishnu and the right is Brahma, as can be identified by the glorifying tilak on their forehead and Shiva’s third eye. The very essence of this sculpture generates vibes of positive spirituality and the shiny texture portrays his magnified beauty.