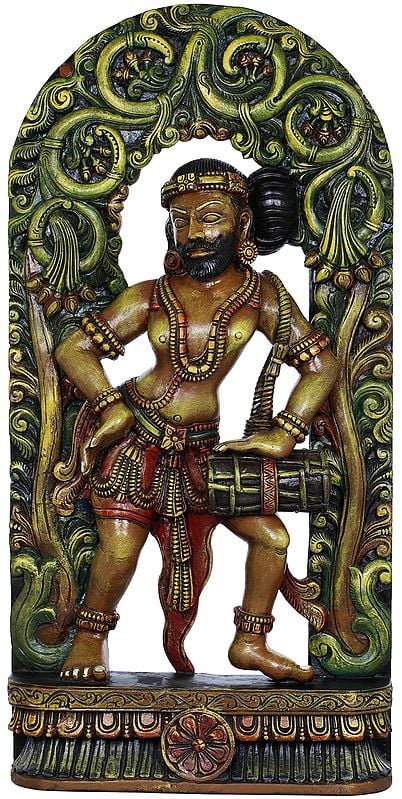 Khajuraho Musician Under The Vine

FREE Delivery
Only 1 available
$795
A handsome, well-built youth, sculpted after the style of Khajuraho cave figures. Of imposing form, radiating with an unmistakable ardour. He is playing a handheld dhol, which is a folk drum found in many variations across the subcontinent. From the deliciously dynamic stance of His body and the gravity of His composure, the artist seems to be steeped deep into His music. In addition to a certain quality of ruggedness, there is vigour and ferocity in the composition.

Sculpted from a solid block of wood and finished in an earthy colour palette. The Khajuraho musician is standing on a pedestal of inverted and elongated lotus petals. A statement flower motif on the midline of the same. The aureole surrounding the figure is a thickly curving panel of luscious green vine, the colour palette of which comprises seductive shades and tints of green and gold. The same is interspersed with richly coloured fruit and flowers. It is symbolic of the plenitude of the evergreen forests of the region where this sculpture has been made.

The musician who is playing under the vine cuts a striking figure. He has the coppery-gold complexion of the people of the Central Plains, brought out skilfully by a colour gradient of earth and yellow and burnt sienna. He is wearing a crimson dhoti and chunky adornments that accentuate the beauty of His musculature. The dense black mass of his hair is gathered in a bun, which sets off his ample facial hair.