Ganesha Drawing the Cart with His Mouse on it 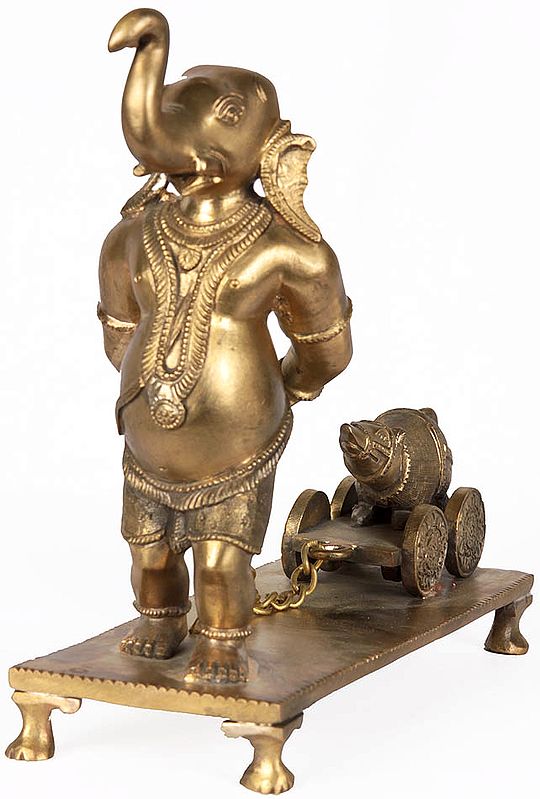 $375.00
Notify me when this item is available
Save to Wishlist Send as E-card Share by Email
A lyric, composed in bronze, overwhelmingly pleasing and exotic, seems to sing of the playful Lord Ganesha sporting with his mount mouse as if telling it that it is now his turn to draw the cart, and its, to enjoy a ride. A deity of masses, compassionate and just, Lord Ganesha, representing the democratic spirit of equality, has taken the charge of pulling the cart giving respite to his mount tired of carrying his voluminous figure on its tiny form for ages now. With its upwards raised tail and inflated body the triumphant mouse appears to be in full mood to enjoy the opportunity and give its Master a chance to serve the servant by his benevolence and genuineness. In the entire theological tradition, anywhere in the world, it could only be Lord Ganesha who manifests in his being such blend of humility and majesty, as reveals this statue.

Artists experiment with forms; in case of Lord Ganesha, it is him who experiments with the artists’ power to innovate challenging them to discover a form that the elephant headed god has not assumed before, and every time their imagination falls short and the forms of Ganesha outreach it. The artist of this cute tiny bronze statue has, however, baffled the Great God and arrested him into a form before he could take to it of his own and defeat his effort to innovate a new form. Not merely that the artist has discovered a new theme for his figure of Lord Ganesha, he has made a notable shift in his iconographic vision too. A pot-belly and elephant head apart, he has conceived his figure with normal two arms, not four or more with which his statues are usually conceived, nor various arms and attributes carried in them. Alike, his trunk is neither laid on his chest nor it is turned to left as it usually does. It is rather upwards raised. He is putting on his usual ornaments and a loincloth but the most essential of them all, his towering crown which is also his helmet, is missing.

For giving his figure the look of one toiling hard for pulling forward a cart the artist has completely revolutionized the form of Lord Ganesha. An ordinary being with his divinity shed, Lord Ganesha has been endowed with normal two arms, not four or more, and those too, not with any divine attributes in them. Turned to his back where they hold a chain these hands are dragging a cart on which his lavishly bejeweled mount mouse rides. With his left foot placed ahead of the right, his figure is making a forward thrust. His posture, especially the suppressed left knee, reveals strain of toiling hard. In the process both his belly and hips inflate and the stress reflects also on his face. This stress reflects also in the action of his trunk. Usually when enraged, sporting or toiling hard an elephant identically raises its trunk.

With its upwards raised muzzle the mouse is looking at its master, perhaps with indebtedness for his compassionate treatment of it. Symbolically, with his rare divinity Lord Ganesha leads even the most humble creature like a mouse to a divine destination redeeming it from every kind of bondage. The statue seems to relate to a lesser known myth according to which the mouse that served Ganesha as his mount was a demon by the name Musaka. While it was doing a mischief Lord Ganesha caught hold of it and subdued it. Redeemed of its evil nature Musaka prayed Lord Ganesha to take it into his service. Lord Ganesha granted his prayer and nominated it as his ‘vahana’ – vehicle. This origin of the mouse that Lord Ganesha rides gives it its tremendous might to carry over its tiny figure the massive form of Lord Ganesha. Symbolically the statue represents Lord Ganesha leading Musaka to his destination : his redemption.

Click Here to View the Reverse of this sculpture.