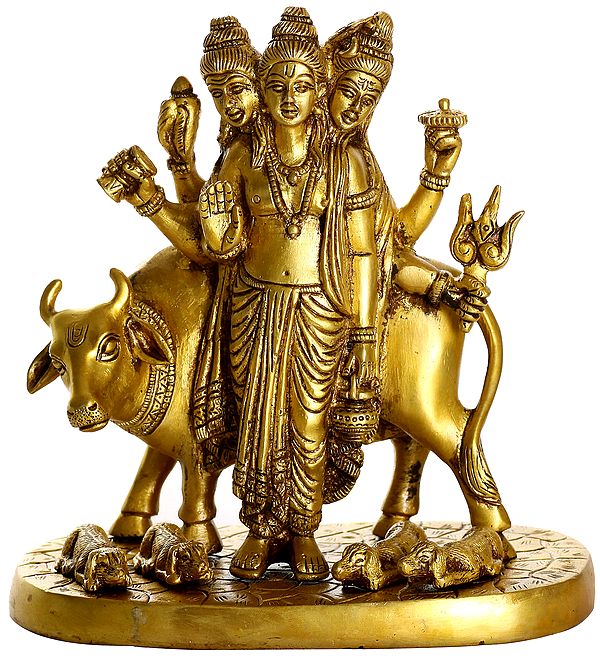 £133.50
Notify me when this item is available
Save to Wishlist Send as E-card Share by Email
This magnificent image with three faces and six arms, the central one, or the principal, reflecting a sublime saintly emotion, full of great divine aura and a rare quiescence enshrining it, represents sant Dattatreya, the son of sage Atri by Anasuya, but revered in theological tradition as one of the incarnations of Lord Vishnu. Sage Atri had three sons, Datta, Soma and Durvasas, Soma is said to have incarnated Brahma, Durvasas, Shiva, and Datta, Vishnu. However, in the theological tradition, of the three Dattatreya alone elevated to the divine status and entered into the hierarchy of Hindu gods and even those who hesitate in considering Dattatreya as one of the incarnations of Vishnu revere him as one of the most sublime divinities. Different from the Puranic position in popular tradition Dattatreya seems to have assimilated in him the incarnation aspects also of his two other brothers, Soma and Durvasas, revering him as incarnating the Great Trinity, not one of the Three.

As regards the incarnation status of Dattatreya he seems to have acquired recognition as Vishnu’s incarnation quite early. Allusions to Dattatreya’s divine powers occur in the Mahabharata around the sixth century BC. As early as 650 AD the great Sanskrit poet Magha alludes to Dattatreya in his famous poem ‘Shishupala-vadha’ as the incarnation of Vishnu. The Brahmanda Purana gives a detailed account of how the Great Trinity – Brahma, Vishnu and Shiva conjoint, themselves have granted to Anasuya the boon that they would take birth as her sons in appreciation of her services she rendered in persuading Silavati to take back her curse and let the sun rise. Ugrashravas, the husband of Silavati, the faithful wife, was cursed by Animandavya that with the rise of the sun his head would break and he would die. Silavati by the power of her chastity ordained that the sun would never rise. This imperiled the existence of life on the cosmos. The crisis compelled Brahma, Vishnu and Shiva to make joint effort in persuading Silavati for taking back her curse. In this Anasuya proves to be the ultimate help.

This style of image with three faces and six arms seems to have emerged around early sixteenth century. In his ‘Gurucharitra’, a text dated 1550 AD, Saraswati Gangadhara alludes to the worship of the three-faced and six-armed images of Dattatreya. He also talks of the figure of a cow behind him and four dogs in front. Obviously, this image, now completely rigidified, had emerged in popular worship sometime before 1550 AD. The three faces represented Brahma whom Soma incarnated, Vishnu, he himself incarnated, and Shiva whom Durvasas incarnated. As his image in this brass statue, besides his normal right hand held in ‘abhaya’, in his other five hands he is represented as carrying the essential attributes of the Great Trinity, usually Brahma’s ‘kamandala’ – pot with spout, Vishnu’s ‘shankha’ – conch, and ‘chakra’ – disc, and Shiva’s trident and ‘damaru’ – double drum. The cow behind him is symbolic of the earth, and thereby, of the entire space that he protects as Vishnu, and four dogs in the foreground symbolising perhaps time’s four parts, four eons or four parts of the solar day, the ‘ chara-praharas’. As per ‘Gurucharitra’, Dattatreya was worshipped those days as Parabrahma – Transcental God.

Exactly as prescribed in the iconographic tradition of Dattatreya, his figure consists of three faces, the central one with the Vaishnava ‘tilaka’ mark being that of Vishnu, while that on the left with the ‘tripunda’ – the auspicious forehead mark with three horizontal lines, and the ‘trinetra’ – third eye, that of Shiva, and on the right with a crescent-like mark, that of Brahma. All three faces have almost identical coiffures, though that on the left representing Shiva has attached to it the crescent and the river Ganga emerging from it. The normal right hand is held in ‘abhaya’ and the upper two hold conch and ‘damaru’; those on the left are carrying disc, trident and ‘kamandala’. Like a mendicant moving from one place to other, the image is carrying on its left shoulder a shoulder-bag, typical of mendicants. Dattatreya has been represented as wearing an ‘antariya’, a sash, a few ornaments on his neck, arms and wrists and the usual wooden slippers in his feet. The image has in the background a cow and four dogs, two flanking on either side.