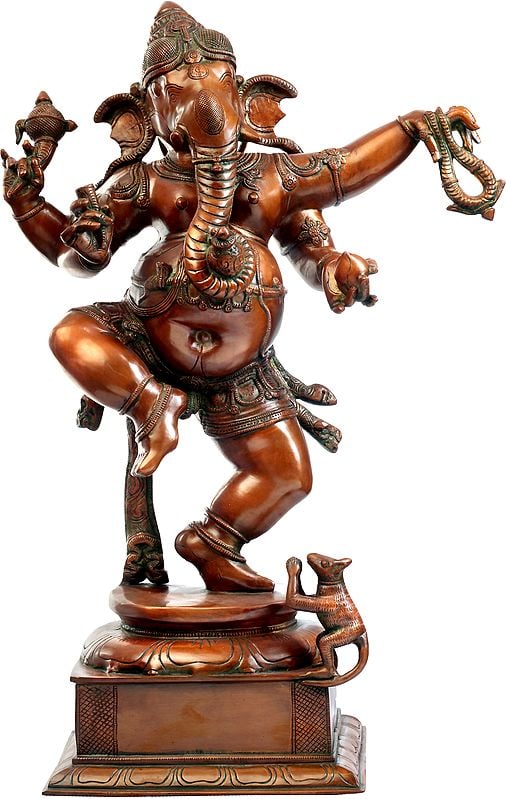 $895.00
This unusual sculpture of the Lord Ganesha inspires the viewer with its dynamism, its sheer exuberance. The Lord's one leg is raised so high as to almost touch the bottom of His rotund belly, while He is balanced on the toes of the other. Each of His plump arms are in motion. In one He carries a noose to lassoe the adharmee back to the path of dharma; in another He carries His favourite modak laddoo; His chubby hands grip a miniature goad in another; and with the final of His four hands He grasps His own singular tusk.

His torso has been sculpted to perfection - the chest is tilted to one side in a pose of divine dance, while His belly has the perfect shape of a pot. It is held in place by a snake because He once burst His belly after having a (godly) number of laddoes. Note the beauty of His deep navel. He is wearing a short dhoti (like little boys are dressed by their mothers so that it does not get in the way of their play), the sash of which reaches down to the ground. A few chunky ornaments - necklaces, amulets, and anklets - have been sculpted with great skill against His baby skin.

The Lord's spired crown is typical of the way elephants are decorated in India. His curvaceous elephant's ears and the striated trunk, curled around a conch, have been carved with considerable workmanship. The Lord is dancing upon an upturned-lotus pedestal, on the edges of which is His vahan, the mouse. It is looking up at Him with folded palms, taking in the divinity of His dance.

This item can be backordered
Time required to recreate this artwork
4 to 5 weeks
Advance to be paid now
$179.00 (20%)
Balance to be paid once product is ready
$716.00
Notify me when this item is available
Save to Wishlist Send as E-card Share by Email