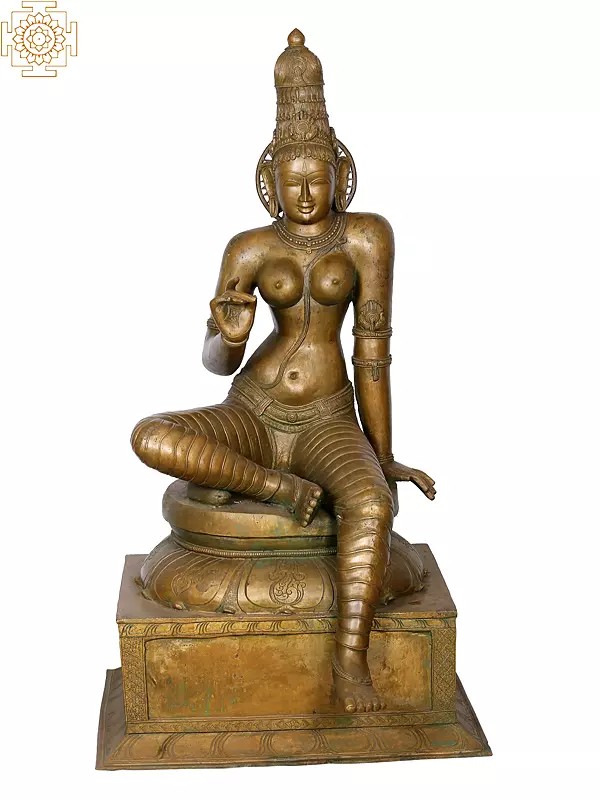 The divine mother goddess is Ananta-Rupini, one who has boundless forms. However, according to the celestial events she empowers, Hinduism provides her with a name and a discernible form, so that the devotee can begin to comprehend Ma-Shakti’s divine aura. Among her innumerable forms is- Uma, the enchantress of the great yogi- Shiva. Shiva represents the passive, male energy and Uma is his counterpart, the active, and female. When Shiva enters into deep meditation and the interplay of female-male energies is stopped, the world order faces the danger of an imbalance. This is when the great-goddess, Mahadevi takes the form of Uma or Bhogashakti, bringing Shiva out of his meditation, towards the process of Creation.

Once Uma unites with Maheshwar, with every Leela (cosmic play) they perform, life blooms, and balance is restored. Uma thus is the most exquisite and sensuous form of Parvati, the Bhuvana- Mohini, who has mesmerized the whole Universe.

This large bronze from Swamimalai is the representation of the majesty of Uma, who sits on a two-tiered platform, the base of which is a cuboid, with an upturned lotus placed on its top. The detailing of a secondary element- the platform, can be observed to get an idea of the hard work of the artists of Swamimalai. The reversed lotus is accurately treated by showing the ends of the petals of the flower by moulding the bronze accordingly. Uma is seated in a variation of Lalitasana (posture of royal ease) with one leg dangling while the leg resting on the platform is slightly raised, owing to the support Devi has placed under it as well as the shifting of her body weight onto her left hand. Her grand form feels impressive with her long jatamukut- hair knotted in a long conical shape and held in place by hair ornaments. A tiara with Makara motif (the mythical composite animal with body parts of an elephant, a crocodile, and a lion) perfectly sits on her hair which forms a series of beautiful coils over her forehead. The entire hairdo is secured by a round and floral Sirachakra at the back. Her ears are elongated from the weight of the jewelled earrings that are missing in this bronze statue. Their absence and the Yajnopavita Devi is wearing suggests that she has taken the form similar to her husband Shiva, devoid of any heavy ornamentation. On her neck are three rows of simple neckpieces made of metal and beads. The stylized Makara motif of her tiara is repeated in her armbands, bringing symmetry to the adornment of Uma. Below the Makara armlet, Devi wears another jewelled string and bracelets on her wrists, all enhancing the beauty of her creeper-like slender hands. Her right hand is in the Katakamukha gesture, for holding a lotus flower, usually offered to the Devi by her devotees. The consort of Shiva has rounded breasts, whose full shape is pleasingly contrasted by her slim waist, deep navel, and wide hips. A waist belt is tied over Devi’s antariya (lower body garment) which is draped in the Kaccha style, with a part of the garment passing between her legs, from front to back. Long anklets and folds of Uma’s dhoti that fit tightly to her body, have emphasized the graceful placing of her legs in the Lalitasana.


This Roopa (form) of Uma is also called Bhogashakti – the goddess of Pleasure. Made amply clear by her sensuous posture and the details of the sculpture, Uma is the embodiment of desire and passion. Idealized versions of the Indian standard of feminine beauty are clubbed together to create the visual depiction of the daughter of Himalaya who succeeded in making a householder out of the ascetic Shiva.

The sensuality in the body of Uma is contradicted by the inward-looking expression on her face. With her almond-shaped eyes, lotus lips, and the overall softness of her countenance Uma reminds us of the Sadashiva of Elephanta caves, the numerous Chola Shiva sculptures, and the more imaginative ones among us, of the Buddha. The Swamimalai craftsmen present the intricate philosophical imagery of Mahadevi, the great goddess through their artwork. Uma is passionate, but she is simultaneously dispassionate. Shiva’s Shakti pulls him into the functioning of the mortal world, but she also becomes the unseen yogic energy that sustains Shiva when he is in Dhyana (deep meditation). Those who can understand the vast and paradoxical nature of the Great Goddess are able to see that she and Shiva are not separate. Such is the oneness of Shiva-Shakti that the artist could not help but carve a visage for Uma that reminds the devotee of Shiva that resides in Shivani (a name for Parvati). 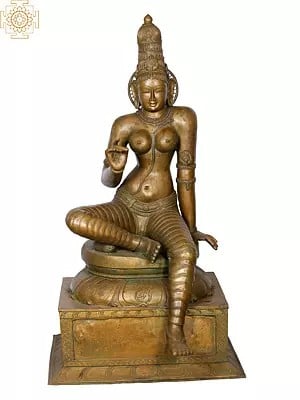