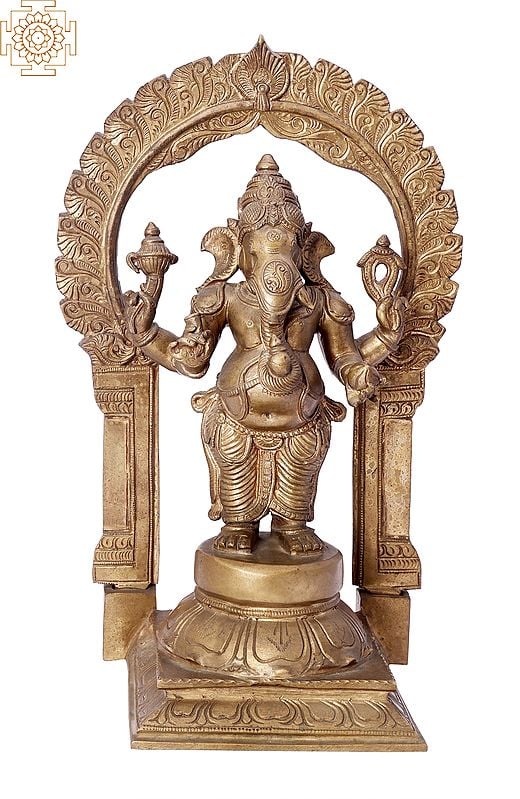 A serene standing Ganesha figure. On the pistil of an upturned lotus rest the divine feet. The erect, characteristically formed figure wields four arms (the chaturbhujadhari, the one possessed of four arms): mace and noose in the posterior hands, symbolic weapons to be used against adharma, and the broken tusk and laddoo, the Lord’s favourite Indian sweetmeat, in the anterior ones.

Made from panchaloha, a mix of five (‘pancha’) iron-based (‘loha’ is Sanskrt for iron) alloys, this murti would be a statement addition to the home of any devotee. The gold-creme colour is unique to the medium, which in turn dominates the contemporary sculptural tradition of the South. Key elements of this composition have been drawn from the traditional temple iconography of the son of Shiva: the pillar-brackets and prabhavali (aureole), the ornate crown, and the attire and adornments of the Lord.

At the base of Ganesha’s serrated trunk is a large tattoo. An unassuming countenance framed by shapely, perfectly symmetrical ears. In fact, the ears are one of the most striking aspects of the Lord’s person. Another feature of note, which adds to the beauty and uniqueness of the composition, is the solid prabhavali. It is fashioned from a succession of leaves with identical, curvaceous venation.