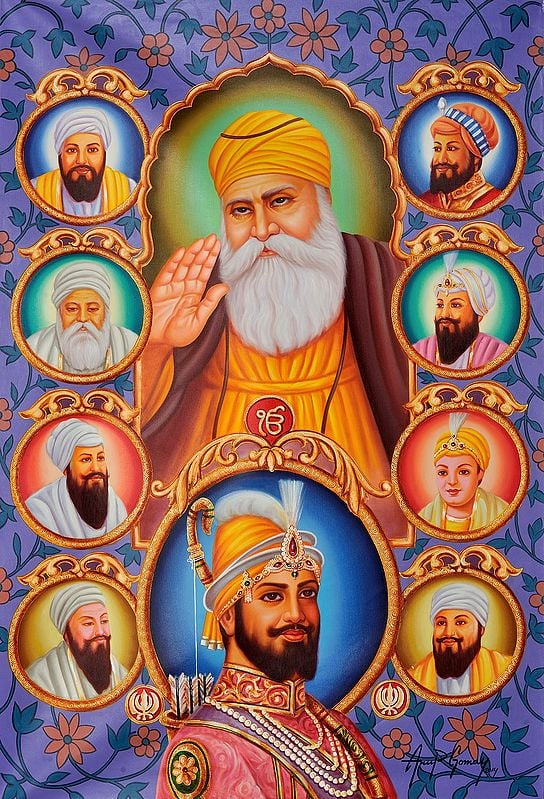 $1295
The painting, a large size canvas in oil, 6ft by 4 ft, as could have sufficient space for portraying ten figures – each with the essential features of his being, represents ten Sikh Gurus, to include Guru Nanak, the founder of the great sect, and Guru Gobind Singh, the tenth and the last personal Guru, and hence also called in the Sikh tradition ‘Dasam Patsai’ or ‘Patsayi’.
Quantity
Notify me when this item is available

Guru Nanak who was born in 1469 in a village in Punjab, now in Pakistan, Sikhs’ most sacred seat, had founded the new Panth just a little before he passed away in 1539. Obviously with a larger image his representation occupies the central space on the canvas. For portraying the ultimate reverence that Sikhs have for Guru Nanak, also revered as Baba Nanak – the fountain-head of the Sikh faith, the artist has transformed the halo behind his face into the form of a shrine with shallow arched façade. Guru Nanak’s ‘Panth’ was two-fold. It was the embodiment of his revolt against the establishment. He often asked : why there was suffering when the land had thousands of temples, mosques and other shrines and many thousand holy men; and secondly, he laid emphasis on equality and fraternity as the highest principles of living, and on nam-simaran – commemoration of His name, nam-simaran being considered as the most potential instrument of spiritual elevation and communion of self with the Supreme Nanak’s Panth was initially known as the path of ‘nam-simaran’.

Under Guru Nanak’s image there is the image of the tenth Sikh Guru Sri Guru Gobind Singh, not as large as Guru Nanak’s but larger than those of the other eight Sikh Gurus. By founding Khalsa in 1699 Sri Guru Gobind Singh had given to Sikhs – the followers of Guru Nanak’s path, a well-defined identity. Khalsa also gave to Sikhs unity as a community, a set of norms giving the community its cultural distinction, as also the convention of an incorruptible Guru not composed of flesh and blood that corruption sometimes infected . The fifth Guru Arjan Dev had not only compiled the ‘vani’ of earlier Gurus along his own, and had installed the ‘Granth’ a deity-like in reverence in the newly constructed Durbar Sahib at Amritsar but Guru Gobind Singh had installed Sri Granth Sahib as the eleventh Guru by abolishing the tradition of personal Gurus for guiding the community in future. Before he installed Sri Guru Ganth Sahib as the Panth’s Guru he revised the earlier ‘Pothi’ by including into it the ‘vani’ of Gurus subsequent to Guru Arjan Dev. He had himself contributed a large body of ‘vani’ but the sacred Granth that he had edited did not include any. First impersonal and the eleventh in the tradition Sri Guru Granth Sahib is now the Sikhs’ timeless Supreme; bound with the Granth are now all their rituals, faith and devotion – all prayers and their accomplishment.

The placing of the two Gurus in the painting is quite significant. Though the representations of both occupy the central column, Guru Nanak, the fountainhead comprises the column’s apex while Guru Gobind Singh, its bottom – the base, as Guru Nanak gave to the tradition, a beginning, and Guru Gobind Singh, a base, an identity and a cultural model for Sikhs in all their future generations. Though the artist Anup Gomay has followed the Sikh art tradition, especially as propounded the known Sikh painter Sobha Singh, for his iconographic models of different Gurus, Guru Nanak and Guru Gobind Singh in particular, Gomay has laid special focus on some of the attributes that better define their personalities. The ‘Panth’ that Guru Nanak had initiated was the path of commemoration of His name and was according known as the path of ‘Nam-simaran’. He gave a simple ‘Ek-Onkara’ matra – hymn lauding the Supreme as One disapproving plurality of God into gods. The artist has hence laid sufficient emphasis on ‘simarini’ – beads, and the symbolic motif representing ‘Ek-Onkar’. Most part of Guru Gobind Singh’s life was spent in fighting against Mughals’ unjust rule and their ill-treatment of Sikhs. The artist has hence conceived his personality like a warrior Guru carrying a bow and arrow.

The images of other eight Gurus have been represented anti-clock-wise is order of their ascendance to the Guru-gaddi. All eight figures have been framed in round-medallions with decorative extended apexes attributing to each the beauty of a designed frame. On the top on Guru Nanak’s right is the likeness of Guru Angad. Guru Angad as Lahina was one the most devoted disciples of Guru Nanak and was hence chosen by him to hold the responsibility of guiding the Panth. Though just for 13 years on the gaddi before he passed away in 1552 he established Gurumukhi as the Panth’s script and langar – community kitchen, as an essential feature of community life. A born poet he composed many hymns 63 of which comprise the part of Sri Guru Granth Sahib. Under his image is the image of Guru Amardas, a great builder who is known for constructing a step-well at Goindawal. It has been built with 84 steps, that is, one shall reach the water after he has crossed 84 steps, symbolically the self has to undergo 84 crores – 840 millions, of births before salvation.

Under the image of image of Guru Amardas is the image of Guru Ramdas, a son-in-law of Guru Amardas who had nominated a Guru from his kin. He had founded the town of Amritsar, initially known as Ramdas Pur, and constructed the Amrit-sarovar, the pond of nectar that now houses the Golden temple. The fifth, Guru Arjan Dev who succeeded Guru Ramdas as his son – Guru-gaddi being now the subject of succession, has been represented under the image of Guru Ramdas. Guru Arjan Dev was the builder of Durbar Sahib and had compiled earlier Gurus’ ‘vani’ and installed it the Durbar Sahib. All four Gurus were the models of simplicity. This representation defines their similar lifestyle. On Guru Nanak’s left are the Sixth, Seventh, Eighth and Ninth Gurus, named, Guru Hargobind, Guru Har Rai, Guru Harkishan, and Guru Teg Bahadur. Except the Ninth Guru Teg Bahadur who pursued a simple puritan life, the lifestyle that other three Gurus had combined element of regality, which in view of their constant conflict with Mughals was a need for it inspired confidence among their followers. The artist has represented them with similar lifestyle.

This description by Prof. P.C. Jain and Dr. Daljeet. 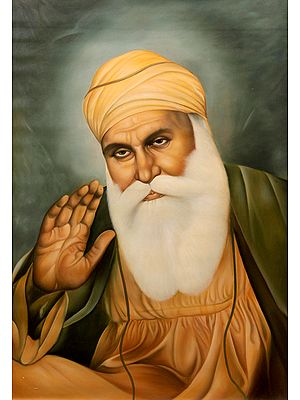 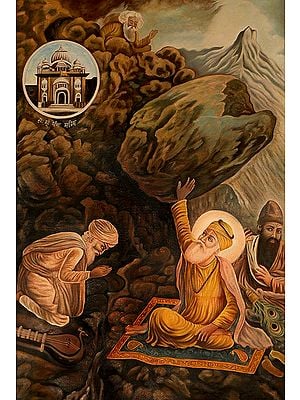 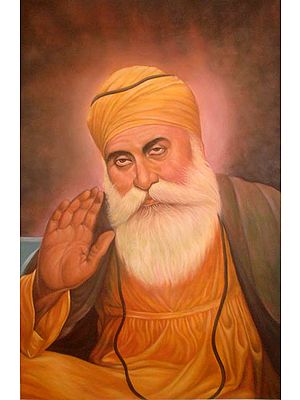