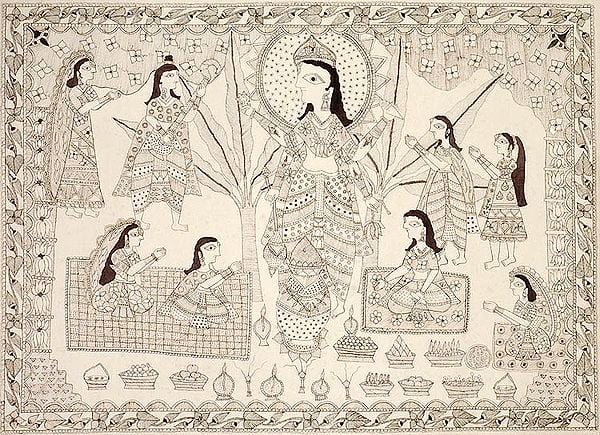 $175
Quantity
Notify me when this item is available

Fair trade
This brilliant painting in characteristic Madhubani style represents a royal couple and others engaged in worshipping Narayana who is Vishnu and as compared to ‘nitya’ – mortals, He is ‘Satya’ – One beyond time : Satya Narayana. In Vaishnava tradition one of the most distinguished modes of Vishnu’s worship is hence his worship as Satya Narayana. The painting is a rare example of obtaining a wide range of forms, unique breadth of costume-designs, styles of figures especially of hair-dressing, overall divinity and lustrous faces, all created just by using a single colour, black against a white background, drawn completely with pen – one with a fine point or with the bold, all effects produced by line-drawing : thick or thin. The painting is contained within a border of uniformly drawn floral creeper design consisting of beetle-leaves, banana-buds and a four-petalled flower-form. Bold receptacles of buds drawn with zigzag position create a delightful rhythmic effect. The use of betel leaf-pattern is not incidental. Betel leaves are an essential ingredient in the Satya Narayana Puja and hence used for framing the painting.

Two lotus pillars with stepped base on either side and a waving lintel or ceiling adorned with beautiful flower-design define the pavilion’s architecture in which the worship-rites are in process. The centre of the pavilion space, symbolic of the sanctum for the deity-image, has been defined and consecrated by a pair of banana plants. A tall elaborately bejewelled standing image of the four-armed Satya Narayana who is no other than Vishnu, though in some traditions, especially in South, Satya Narayana is revered as one of Vishnu’s incarnations, not Vishnu in his primordial form, enshrines the centre of the canvas. A large beautifully conceived luminous halo, a low-height Vaishnava crown and Vaishnava ‘tilaka’ apart, Lord Satya Narayana is carrying in his four hands the Vishnu’s most characteristic attributes : disc, conch, mace and lotus. As in routine votive imagery of Vishnu, this form of Satya Narayana has been conceived as standing. Besides the auspicious banana plants, just in front of the image are installed a ‘purna-ghat’ topped by a coconut, two lamps flanking it, and a little farther, another three, as also three incense stands and many trays, baskets and pots containing sweets, fruits, flowers and other articles used in ‘puja’.

On the image’s left is seated on a smaller floor-spread the main priest with a text in his hands. As suggests the gesture of his right hand, he is narrating the ‘Satya-Narayana-katha’. Behind him, on a still far smaller mattress is seated with folded hands one of his assistants. On the deity’s right is seated, on a large size carpet, the host, perhaps a royal couple or one from the society’s upper strata. In the upper register on the image’s right there has been portrayed an ascetic figure carrying a ‘vina’ – lyre in his hands. He is obviously sage Narada, symbolically suggesting that whenever Satya-Narayana-katha and ‘puja’ are performed, sage Narada himself appears and accompanies the ‘katha’ with his melody. The identity of the lady behind the figure of the sage is not known, maybe, Lakshmi, Vishnu’s consort, a celestial person or a human being. On the image’s left is obviously a devotee couple paying homage to the deity with folded hands. 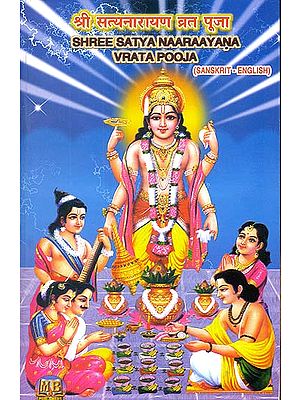 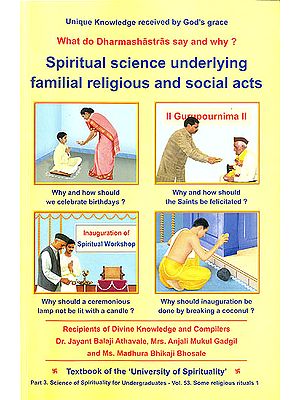 Sri-Sri Radha-Damodara Vilasa (The Inner life of Vishnujana Swami and Jayananda Prabhu): Volume One 1967-1972
By Vaiyasaki dasa Adhikari
$43
FREE Delivery
Add a review
Have A Question