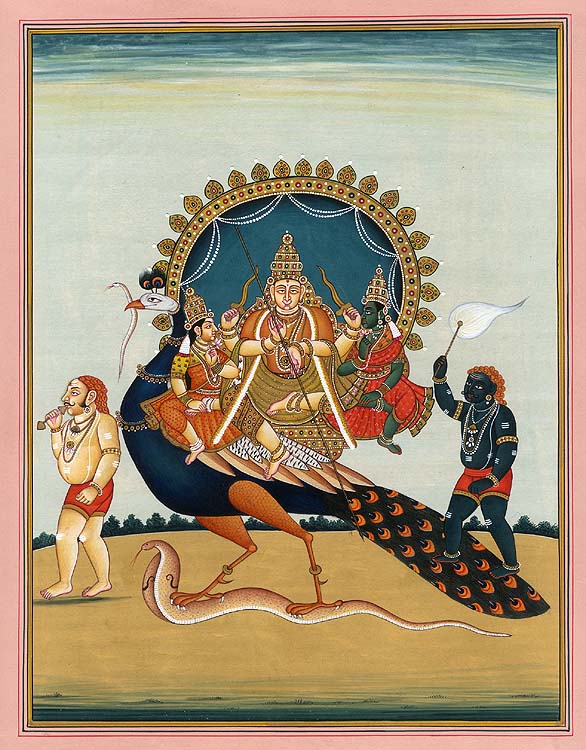 Fair trade
This neatly rendered image represents Shiva's elder son Karttikeya or Skand. He is widely known and worshipped by the name of Murugan, Subrahmanya or Karthikeyan in the South India. Murugan's place in the South Indian divinities is next to none except Balaji and his own father Shiva. He is the benevolent protector against cyclones and all other calamities, god of auspiciousness, and the bestower of riches, prosperity and offspring, which his two consorts  Valli and Devayani, represent. Hence, his more complete image is conceived with his consorts often seated on his right and left thighs, much in the fashion of the North Indian images of Ganesh with Riddhi and Siddhi. Exceptional splendour  rich costume and lavish jewels, defines his imagery. The majestic peacock Paravani is his vehicle. His peacock not only treads beyond time but also has it in complete hold.

His image in the painting, rendered against a circular 'Prabha', which also serves as halo, is the most accomplished type of his images and is also highly symbolic. The 'Prabha', rendered in sea-blue and framed in gold and inlaid with precious stones, not only provides to the dazzling image an appropriate contrast but also suggests that he pervades oceans, and all their calamities and riches, and the sky, and its devastating cyclones and fertilising rains. He is riding the peacock but the peacock is walking over a huge snake, which in the Indian tradition symbolises time. The peacock has a snake also in its beak. Obviously, it suggests that Murugan is beyond time and holds it standstill. The two devotee figures, one walking ahead and the other, behind, are so coloured that one symbolises light  brighter aspects of cosmos, 'Satoguna'; and the other, darkness  darker aspects, 'Rajoguna'. Both figures have Shaivite marks on their persons and are Shiva's 'ganas', the personalised cosmic elements representing both aspects of existence.

The otherwise six-faced Karttikeya of the 'Puranas' is portrayed in the South Indian art usually as single headed. Seated in 'Lalitasana', the image symbolises aesthetic beauty and ease. The four-armed deity is holding in the upper two hands a couple of swords and the other two  the lower ones, are held in 'Abhaya' and 'Varada', though in simultaneity they also carry a long spear; that is, he imparts fearlessness and benevolence and has means to assure them. In iconography, style of costumes, crowns and ornaments and garland, the painting follows the characteristic South Indian idiom. Murugan has in the painting, as also in the South Indian tradition, two wives, seated on his right and left thighs. This is a position different from scriptures, where Karttikeya is mentioned as having one spouse. These scriptures mention her name as Devasena. Being the Karttikeya's consort, she is also addressed as Karttikeyani and sometimes as Kumari who enjoys the status of one of 'Saptamatrikas'  Seven Mothers. Different from the local tradition, Devayani, one of his two consorts, is alluded to in scriptures as the wife of Yayati and the daughter of Sukracharya, the preceptor of demons. It seems, due to a lot of commonality in the two terms, Devasena transformed in the tradition of worship as Devayani.

In authoritative scriptures, Karttikeya was born of Shiva's semen. As the tradition has it, Shiva was once engaged in love for many thousand years and did not come out of his chamber. It worried gods, as in his absence, evil powers were becoming stronger. They went to Shiva and prayed him to stop the love-game. Shiva agreed but the problem was where the semen was shed. It was decided that the Agni  fire would bear it. When it grew unbearable, Agni discarded it into river Ganga. Later, when unable to contain it, Ganga deposited it in Sharavana, a forest. Here out of the semen grew a child. Hearing the newborn cry, six Krittikas, who happened to pass that way, gathered around him. As the child looked at each of them in turn, a new face grew on his neck each time. He, thus, had six faces. All the Krittikas fed the child and, thus, he came to be known as Karttikeya. It is said that on hearing of his birth, Brahma, Vishnu, Shiva and other divinities rushed to Sharavana. Agni, Ganga, the Krittikas, Parvati and Sharavana, all claimed him as their son. Finally, Shiva arbitrated and declared that as Kumara, the child would be Ganga's son; as Skand, Parvati's; as Karttikeya, Krittikas'; as Mahasena, Agni's; as Sharavana, Sharavana's; and as Guha, Shiva's.

Brahma, Vishnu and Shiva took him to Indraloka, where he was crowned and designated Commander of Indra's army. All the gods gave him their celestial weapons and attributes. Vishnu's Garuda gave him his son, Paravani, the peacock, for his vehicle. Under his command Indra's army attacked Tarakasura, and in the battle Karttikeya killed Tarakasura and his demons. Karttikeya was at that time only seven days old. As the tradition has it, Tarakasura had earlier won from Brahma, the boon of invincibility against anyone who had attained the age of fifteen days. The legend of Karttikeya's birth is depicted quite differently in the Mahabharata. According to the Mahabharata, Daksha Prajapati had two daughters, Devasena and Daityasena. Both sisters used to enjoy bathing at Manasa 'saras' ponds. One day, the demon Keshi passed that way. Their rare beauty infatuated him and made him crave for their love. Daityasena agreed to marry him but Devasena refused. Keshi wanted to take her forcibly. Meanwhile, Indra happened to pass therefrom. Devasena prayed Indra to help. As a result, there ensued a serious battle. Keshi attacked Indra with his club but Indra cut it into pieces with his disc. He also smashed the mountain, which Keshi hurled on him. This struck Keshi with fear and with Daityasena he ran away. Devasena desired that Indra sought for her a husband who would defeat all  gods, demons and Yakshas. Unable to think of anyone with such prowess, Indra took the matter to Brahma. Brahma sought all gods to put their heads together and created out of them a six-headed child, named Subrahmanya by Shiva, to wed Devasena.