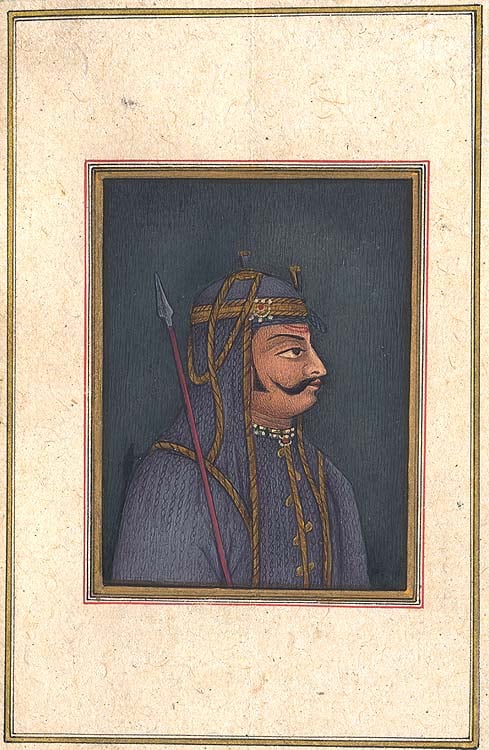 $75.00
This item can be backordered
Time required to recreate this artwork
4 to 6 weeks
Advance to be paid now
$15.00 (20%)
Balance to be paid once product is ready
$60.00
Notify me when this item is available
Save to Wishlist Send as E-card Share by Email
Rajasthani miniatures, a comparatively late school of Indian art, represented India's great creative tradition.

Mewar, an important unit of Rajasthan, is known to be the pioneer of all sub-schools of Rajasthani miniature art. It is also known best for its great patriotic confrontation with Akbar's authority. Maharana Pratap is the subject of many a folklore. His deeds of exceptional courage and bravery are very popular. He rebelled against Akbar's authoritative rule and provoked many others to rise against the Mughals. During his lifetime, he did not surrender and died a soldier's death.

The best loved figure of Rajasthani folklore is depicted here in profile in this tiny miniature. Maharana Pratap is seen in full battle gear - the heavy metal armour covering his head, neck and torso. He holds a spear in his hand. The braveheart has an oval face with a prominent nose, large eyes and a short neck. His impressive moustache is a symbol of masochism. The artist in his effort to make it look simple and serene has turned it into a static and austere portrait.