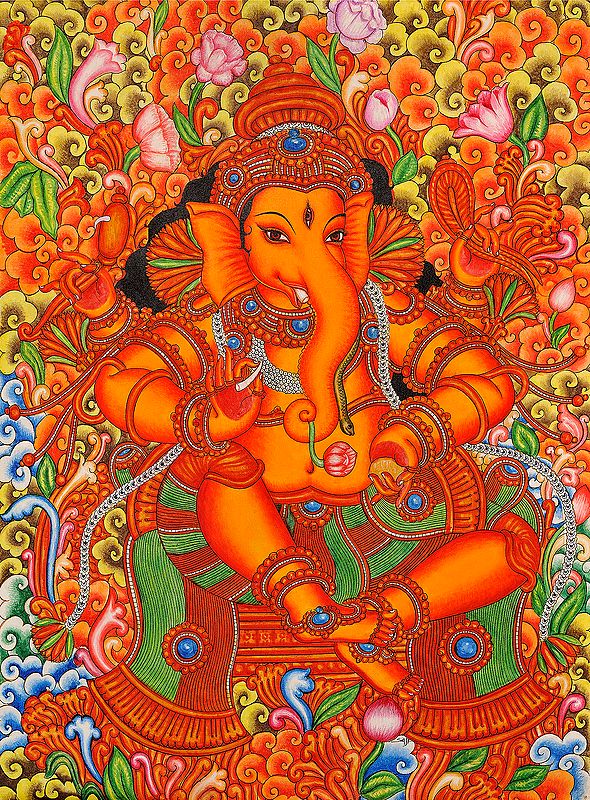 Lord Ganesha in the Style of Mattanchery Palace Murals

$695
Quantity
Notify me when this item is available

This painting, as bright as a flame of fire has taken to a form, represents Lord Ganesha, if scripturally defined, in his Ekadanta manifestation. Rendered using just five colours in their basic tints – pure and unmixed though shaded, bright orange being the principal, green, blue, yellow and black being the minor, the painting occupies the entire canvas space not even a millimeter of it left uncovered. The painting has been rendered using the Kerala’s traditional art style reaching the apex of its glory in the murals of Mattancherry Palace at Cochi. The most representative form of Kerala folk art tradition the Palace murals were initially executed in mid-sixteenth century and were later some new panels were added to them in mid-nineteenth century.

Though three hundred years gap in between, the stylistic unity of the two groups of them is absolutely intact. These murals occupy some three hundred square ft wall space, some in the upper floor, a few in the space around staircase, and the rest, in lower chambers meant for royal ladies. Though executed in folk style, these murals are exceptionally fine and well defined and maintain a certain level of stylistic accomplishment. The space around the staircase has panels of various deities, this Ganapati figure being one of them. Large eyes, a look of maturity and plumpish figures with muscular anatomy are characteristic features of Kerala art style. Apart, it has a background packed with lotuses, lotus-leaves, leaves of beads growing around water ponds and pits and ferns and plants growing around there.

With both of his legs squatting on his seat, the right upwards raised, while the left stretched along the floor of the seat the four-armed elephant god is seated in a posture of absolute ease defined as ‘utkut akasana’ in iconographic tradition. The bamboo basket like conceived seat with identically designed cushions laid over it has almost merged with his figure. As prescribed for his image manifesting his Ekadanta form he is carrying in his normal right hand a prominently drawn broken tusk, and in normal left, a pomegranate, a substitute of ‘laddu’; in his upper hands he is carrying an elephant goad and a noose, the other two scheduled attributes. With his face slightly turned to left the left tusk is not visible; but the right tusk’s broken part has been prominently painted. In his trunk he is holding a lotus and along it there descends a snake. On the forehead he has ‘tri-netra’ – third eye. Besides a crown with top conceived like a temple-tower, typical of South Indian deity iconography, the figure of Lord Ganesha has been vividly adorned.

The Ekadanta manifestation of Lord Ganesha is one of his main eight classical forms enumerated in early texts, the Mudgala Purana in special. These eight primary manifestations prevail over eight human weaknesses, namely, ‘moda’ – arrogance, ‘abhimana’ – pride, ‘matsarya’ – jealousy, ‘moha’ – infatuation, ‘lobha’ – greed, ‘krodha’ – anger, ‘kama’ – lust, and ‘mamata’ – possessiveness as also ego. The elephant god’s Ekadanta form prevails over ‘moda’, the arrogance that breeds non-acceptance and hence disharmony with the world though one is destined to live in it. Ekadanta Ganapati vanquishes arrogance and makes life harmonious. Ekadanta Ganapati is also the patron of literature. As contends one of the traditions related to Lord Ganesha, after all others failed, it was in his manifestation as Ekadanta Ganapati that Lord Ganesha had undertaken to scribe the great epic Mahabharata when sage Vyasa dictated it. According to the related myth he broke one of his tusks and using it as pen noted down the great text. For a child beginning schooling the worship of Ganesha is prescribed to precede the worship of Saraswati, the goddess of learning. Though now legally banned, an ivory pen, at least to them who could afford it, was considered till recent past the highest kind of tool of learning.