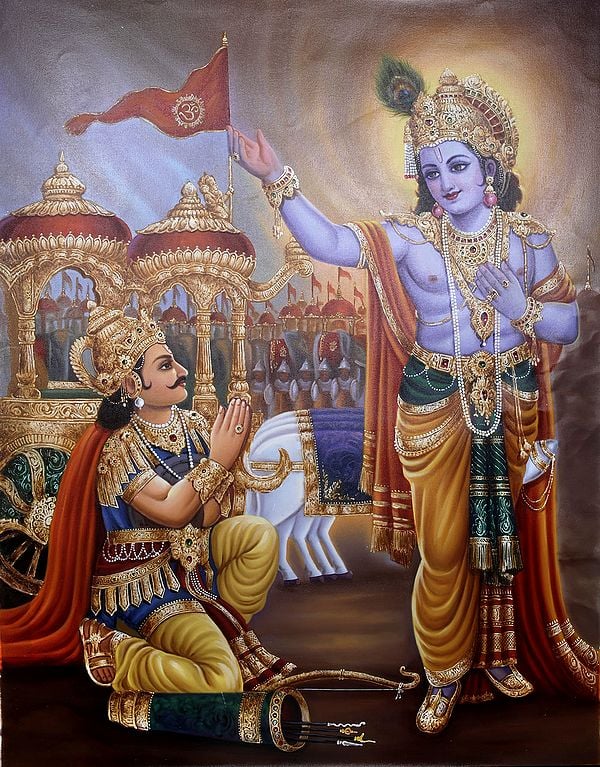 $395
Quantity
Notify me when this item is available

Fair trade
This contemporary painting, oil on canvas rendered using bright colours : abundant red, yellow and blue, and in some areas exceptionally bright green and golden, compounded and shaded creating multi-colour effect, represents the first day of the Great War – the Mahabharata, when Arjuna, the great Pandava hero, misled by his own weaknesses and by delusion, declines to raise arms for among those he was required to kill there were his own kin, his Pitamah – the great grandfather and others, and Lord Krishna, his charioteer, lifting the veil of his ignorance with his discourse and by revealing to him his all-manifesting and all-pervading cosmic form.

Mahabharata, the great Sanskrit epic by sage Vyasa, discovers its theme not merely in Arjuna’s act, or in acts of other characters but as much in the state of Arjuna’s mind, his delusion or ignorance. In truer sense Mahabharata is the tale of whatever the man is born with, whatever inherent in him : delusion, ignorance, infatuations, love, attachment, detachment, anger, hatred, vengeance, intrigues, commitments, sacrifices, righteousness, loyalties, might, courage, wisdom, conspiracies, lust, evil, good, and other aspects of the man’s mind, the acts of body being merely their manifestations. A long poem running into many cantos and many streams from mythical to scientific exploration of man’s nature, Mahabharata pre-dates the Common Era by six-five centuries, though even today the truths that it explored are as true as ever and attribute to the poem its timeless and universal character.

After Duryodhana, the heir apparent and the eldest son of Dhratarashtra, the Kaurava king of Hastinapur, declined to give to the Pandavas even five villages, or rather an inch of the land, the Pandavas had no option but to seek their rights through arms. Hence a war between Pandavas and Kauravas was declared. All kingdoms of Bharatavarsha joined the either side, giving it the magnitude of Great War – Mahabharata. But, when the two sides met at Kurukshetra and stood face to face in the battlefield, Arjuna in command of Pandavas’ army, and Bhishma, the great grandfather of both, Kauravas and Pandavas, Kauravas’, Arjuna declined to raise arms against him. He declared that even the idea of raising arms against his great grandfather whose affectionate hands and all-time appreciation shaped his life, and against others, all his kith and kin, was impious and he would not commit this sin for a mere piece of land.

Krishna, the Cosmic Mind incarnate, perceived ‘to act’ as the man’s foremost obligation he was born with beyond everything : personal gains, life or loss of life, ties of love or hatred; and also that anyone accomplishing it beyond desires with a detached mind was a ‘yogi’ – one in the world but not in it. He said to Arjuna, for redeeming him from his ignorance, that those standing before him were neither his foes nor friends, nor kin; the imperishable self, as each was, it was neither ever born nor would ever die, neither the fire would burn it nor it would dissolve in water, or weapons, kill it; like clothes it wore a body and would give it up when worn and decayed. Hence, it is only his vanity that he would kill any or spare. His only option was to accomplish the obligation he was born with, for fleeing from the battlefield would only disgrace him as a coward. For attesting the divinity of his statement he revealed to Arjuna his cosmic form. It was in this discourse of Lord Krishna that there emerged the timeless doctrine of ‘Nishkama-karma’, doing a thing with a dispassionate mind not having any desire, love or hatred, without the fear of losing or the delight of winning, without anticipating result – this or that, just doing a thing taking it as the obligation of his birth. Subsequently, this ‘karma-yoga’ theory of Krishna’s timeless rhetoric earned for it a place among world’s few great philosophical doctrines, and independent of the Mahabharata it was seen as his ‘book’ – Shrimad Bhagavad Gita, the common man’s Bhagavata Gita.

Slightly deviating from the most paintings on the theme that divide the canvas space – usually vertical, into right and left and a centre, in one arraying the army of the Kauravas, in the other, the Pandavas, while in the centre, is usually Arjuna’s chariot with a contemplative sad Arjuna riding it and Lord Krishna delivering his sermon, this painting uses a vertical undivided canvas, a diffused row of armoured warriors and behind them a far more diffused line of chariots, perhaps Arjuna’s own. With his hands folded in reverence Arjuna is seated in the foreground. He has abandoned his chariot which stands empty behind him. Arjuna’s mythical bow ‘Gandiva’ and quiver lay away from him. Before him stands a tall figure of Krishna symbolic of his cosmic magnification. Around Krishna’s head is an all-pervading ring of light brighter than the fire. Krishna’s right hand is raised towards the flag mounted on Arjuna’s chariot where a gold-statue of Hanuman holds it as if reminding Arjuna his obligation as a warrior and he was born with. 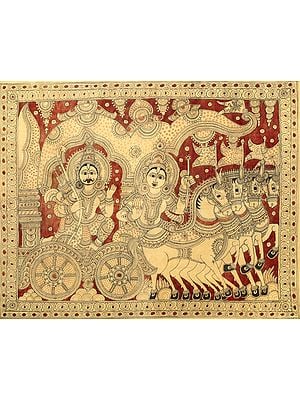 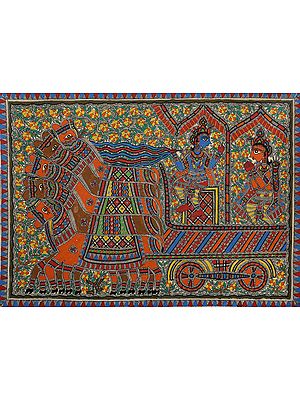 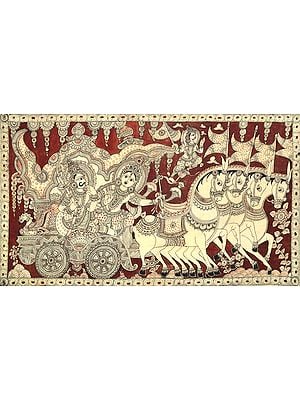 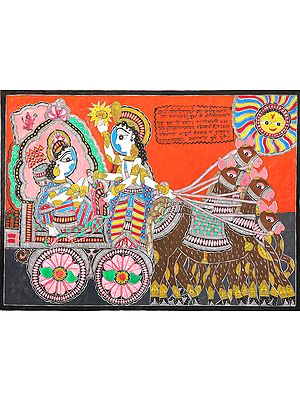 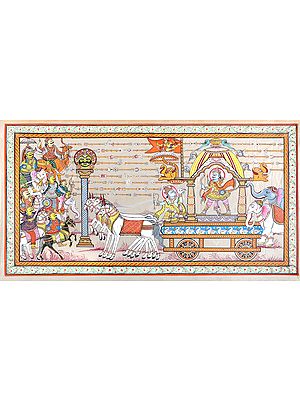 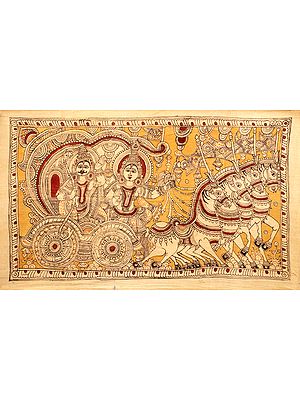 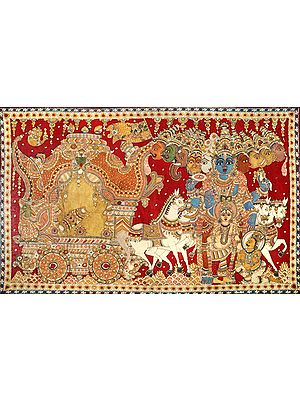 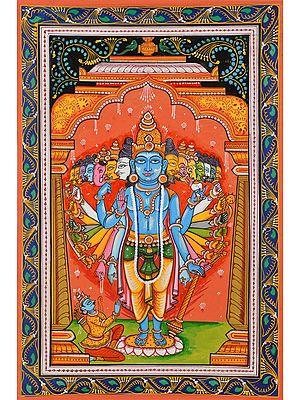 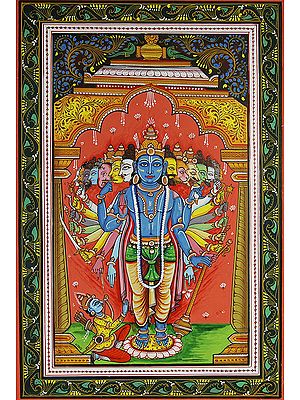 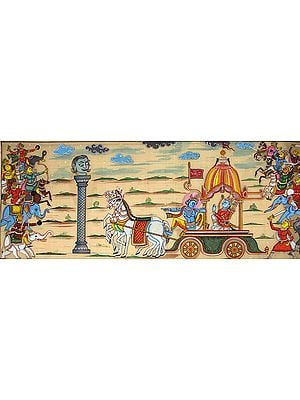 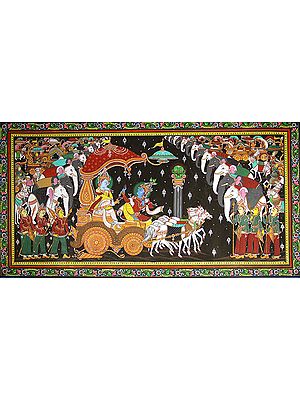 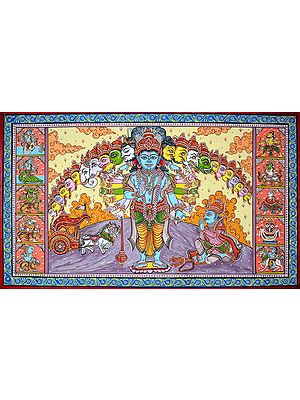