Fourteen Dreams of Trishala, the Mother of Tirthankara Mahavira (An Important Jain Painting) 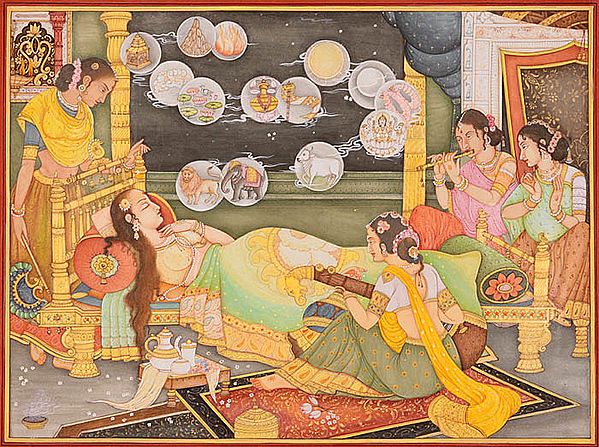 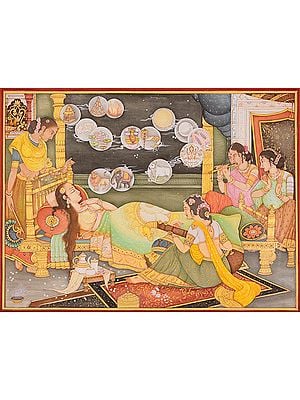 $455.00
Notify me when this item is available
Save to Wishlist Send as E-card Share by Email
A brilliant representation of an ancient theme in contemporary art style rendered using new iconographic models, palette and a blend of modern and medieval architecture, interior and entire ambience, the painting portrays Trishala, the mother of Tirthankara Mahavira, witnessing fourteen auspicious signs in dream. Attended upon by four maids, one blowing a fan, and other three, lulling her by gently played melody, one singing, and other two, accompanying on flute and lyre, Trishala is lying asleep on a gems-studded golden bed with high-raised back and a moderate front supported on a bolster and a square yellow cushion in between her head and bolster. Another bolster, smaller one in size, lies around her feet.

As the convention mandated in ancient and even medieval days, the maids and the mistress have marked difference in their personal appearances : all four maids are in ‘lehangas’, blouses and ‘odhanis’ with far inferior quality of cloth. They have knotted hair adorned with ordinary natural flowers. Contrarily, the figure of mother Trishala has been conceived as wearing a gorgeous sari in green shaded with golden yellow and with rich broad borders, and a blouse worked with gold-wires. She has long unbound brownish hair, silk-like lustrous, and a rivulet-like flowing down the floor. They are adorned with a single but elegantly conceived ornament consisting of gold and pearls. Though all figures have been beautifully conceived – having fair complexion, sharp features and balanced anatomy, a chieftain’s consort, Trishala surpasses others in the beauty of face, figural anatomy and grace, and lustrous skin.

There float in the sky, over the terrace beyond the pavilion queen Trishala is lying under, fourteen medallions, each a perfect circle and carrying a different sign. Three medallions, from left to right, in the upper register contain a palace symbolic of heavenly realm, a pile of gems and a blazing fire; seven medallions in the middle register, ocean in high tides, lotus-pond, ‘purna-ghata’ : ritual vase with lotuses, decorative flag, sun, moon and a pair of garlands; and, the rest four in the lower register, a lion, an elephant, a bull and the lustration of goddess Lakshmi seated on lotus. This chain of medallions seems to descend from high skies and terminating into the eyes of mother Trishala. Incidentally, the artist has painted closest to her eyes the lion that as his identity sign has special significance in the iconography of Lord Mahavira.

The Kalpa-sutra text, highly venerated among Swetambara Jains, has a different version. According to it, after his term in the Heaven was over, Mahavira descended on the earth as embryo in the womb of a Brahmin lady Devananda. Indra, the divine ruler of the universe, saw this phenomenon. According to the divine tradition he could not permit the embryo of a hero like a Tirthankara to develop into the womb of a low-born and poorly provided Brahmin lady. He hence deployed his commander of the universe to exchange the embryo of Mahavira with any in the womb of a Kshatriya lady. This lady was no other than Trishala, the queen of king Siddhartha. Her embryo was shifted into the womb of Devananda in exchange of Mahavira’s embryo. Under the Kalpa-sutra tradition, it was on this day that Trishala had fourteen auspicious signs in her dream.