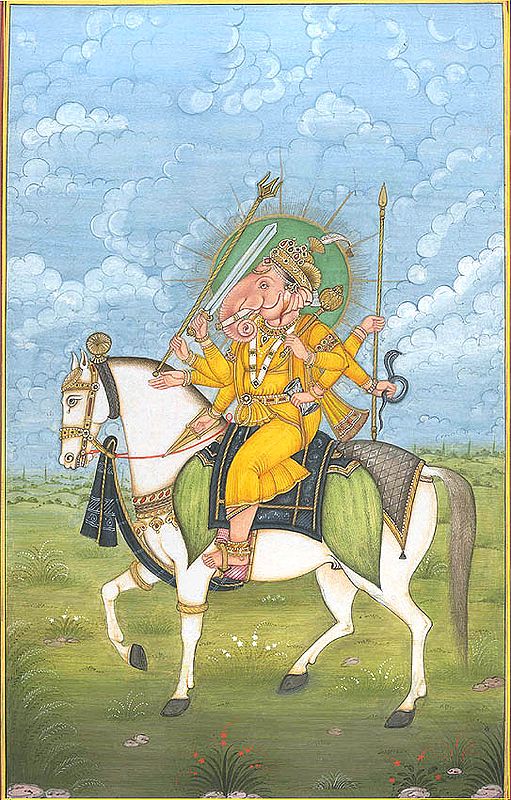 Fair trade
No other auspicious or divine form has been experimented with on such a massive scale as the form of Ganesha. Here the artist has conceived the Divine in a brilliant horse-riding form – to name in its exactness, the equestrian Ganapati, a form which Puranic literature did not meditate on. The Maudagalya Purana has thirty-three forms of Ganesha and other Puranas have a still far greater number, but neither the Puranas nor the hands of artists, even contemporary – sculptors, casters or painters, ever thought of the horse-riding Ganapati form. Not by its brilliance alone, the image dazzles the eye also by its novelty.

Textual forms like multi-armed Vijay Ganapati or eight-armed Yuddha Ganapati have some features common with this form but the elephant headed deity has not been ever visualised as riding a horse. Normally, mouse is his vehicle but the sportive Ganesha would not hesitate teasing his mother Parvati by taking away her mount lion, or even his father by depriving him of his bull Nandi. The only person in the family he would not take such liberty with was his elder brother Karttikeya. He was never seen taking away or sporting with his brother's mount peacock. If classical parameters applied, this form of Ganesha would have some similarity with the Yuddha Ganapati, though it should only be its more accomplished version, as to auspiciousness and supreme wisdom, which Ganapati manifested in his being, this form adds speed which the horse represented.

Against a blue sky with fog-like clouds scattered all over, the image of the eight-armed Ganapati glows like the rising sun – soft and pinkish. He has been conceived with eight arms, a common feature of Yuddha and Simha Ganapati. In seven of his hands he is carrying sword, trident, dagger, mace, spear, serpent and snake, and with the eighth he is imparting protection - abhaya. Apart that in his classical imagery, in any form, he hardly ever carried more than two-three weapons, these attributes are different also from his form as Yuddha Ganapati, however, these, as well as his gestures and eyes fixed on his target make him more war-like. Whatever his form as Yuddha Ganapati in texts, or here, one always finds it difficult to perceive in the soft, simple, benign Ganesha a divinity resorting to arms or indulging in destruction. In his various manifestations – Vijay Ganapati, Ugra Ganapati, Sankalpa Ganapati…., the elephant god invariably carried one or the other instrument of war and had a warrior-like posture but he is not known to have ever resorted to arms against any power, good or bad except perhaps rarely, as when annoyed by the moon's mockery of him, he hurled on it one of his tusks, or ignorant of the fact that Shiva was his father battled against him obeying his mother.

Thus, apparently, a warrior-like form, equipped with deadly weapons, appears to contradict the personality of the benign Lord, though the symbolic thrust of the form is just opposite and quite in agreement to his basic nature. All wars, at least such as Ganesha-like divinities undertake, are not fought in the battlefield. Ganesha symbolises the war that endlessly goes on within – of good against evil, and of spirit against material bondage. Goad as his attribute keeps the conscience alert and forward moving. Noose keeps all faculties collected, as also drags evil to right path. Mace crushes or trident pierces evil in case it continues to persist. In analogy, while meditating on Yuddha Ganapati form, mind is able to collect all its faculties and confront evil more effectively. In this Yuddha Ganapati manifestation, the artist has multiplied the quantum of weapons, perhaps, he had in mind that evil is now tougher and more wide-spread than ever before. Horse's white complexion, representing purity of form, imparts to his Yuddha Ganapati form further sanctity. Yuddha – war or battle, involves a lot of activity, but the Yuddha Ganapati form does not involve any. It is actually the form to meditate on and realise in the mind. It is hence devoid of all acts. In this form the horse's right foot alone has a little forward thrust denoting right direction. In Indian tradition of thought left denotes dissolution, decay and transition, and right, the right path. In 'Anandatandava', Shiva raised his left leg, as it targeted dissolution. When invoked, the Ganapati form, showing forward move, keeps the devotee to the right path. Thus, in the iconography of Ganesha a forward thrust, not necessarily arms, defines Yuddha Ganapati form.

Most attractive feature of the image is its overall brilliance – magnificent jewellery including a gold crown studded with precious stones, armlets, bangles, broad necklace with pendant, huge garland of pearls and gold paijeb – foot-ornament. His molten gold-like body complexion multiplies their magnificence and glow. Each piece of jewellery appears to have come direct from a jeweller's shop. In its aesthetic beauty, fine modelling and overall charm the image is unparalleled. He is wearing a full sleeved tunic, something unusual in divine iconography, besides the usual 'adhovastra' - garment worn below the waist, an elegantly pleated yellow silk 'dhoti' – unstitched sheet of textile, with gold border. A gems-studded beautiful golden girdle supports the 'adhovastra'. He has around his shoulders a beautiful decorative sash unfurling on his both sides, creating a magic of its own