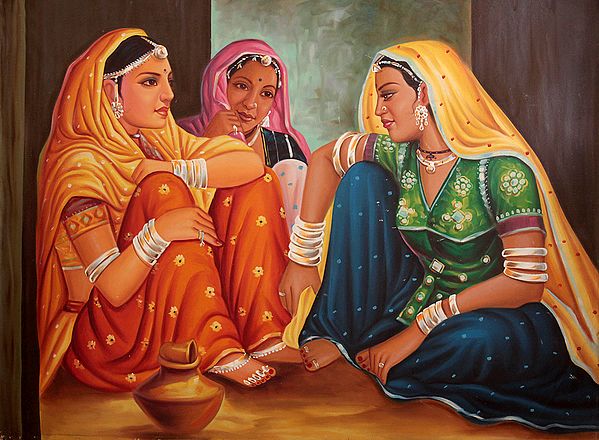 Fair trade
This painting, something like a group-portrait of variously clad three village women of varying ages, is in truer sense the portrait of Rajasthan, the land manifesting in its colours, colourful costumes and in a culture of elegance and rich lifestyle the apex of which revealed in the life of Rajput princes, and its bottom-point, in the life of the common man, sweeping its streets or doing any petty thing, in this common man’s fascination for colourful costumes and in his commitment for the quality of life. Geographies world-over discovered their cultures, Rajasthan is a land where a culture discovered its geography.

Strangely, for portraying the real face of Rajasthan the painter has chosen a formless monochromic blunt background which gives no idea of the character of the land, its geographical distinction, type of architecture, a fort, palace, pond, garden or resort, the land of Rajasthan abounds in, or of the land’s stately grandeur which has always astonished the world with its unique lustre, and against this blunt background three of its inhabitants painted. He has discovered his Rajasthan, the truer one, wide-spread, and timeless, in the style of these inhabitants’ costumes, mode of wearing them, character of textile, type of ornaments, facial features and even in their strongly cast anatomy. Not merely that they belong to Rajasthan, it is in them that the artist has perceived Rajasthan manifesting.

This cult of discovering a land, or the land’s identity, in common man or common woman, or the common man’s emergence as an art theme, again a subtle departure from the miniature art tradition, was a spectacle of the later half of the nineteenth century when influenced by European Industrial Revolution and Renaissance the dignity of common man was realized for the first time. Hence in numerous miniatures rendered after the nineteenth century soldiers, traders, fruit-sellers, kite-makers among others also emerged as their subjects.

However, the dignity of common man, particularly the housewives, domestic workers, rural masses, labourers and down-trodden among others, was truly honoured on par with Indian society’s upper strata by artists who stood in revolt against miniature line, or stood direct in the Renaissance line, working with larger canvas using European techniques and chemical colours. With Bengal, Lahore, Mumbai, Mysore and other places as their main centres, these artists not only painted common man as their primary theme but also discovered in him social, political and national dimensions. Unconventional themes like village women warming them on a winter afternoon seated on roadside, or in the compound of a mud-hut, widely painted by the artists of this new class, were for him not only the study of a human activity but also the tool of portraying a class of society and its social and economic conditions. Raja Ravi Varma himself painted a number of such themes. This contemporary painting, it seems, has taken its inspiration, and sought, perhaps, its model in one or more of such early paintings.

This painting portrays three rural women, clad in characteristic Rajasthani costumes – lehengas, odhanis and blouses, and conventional ornaments – broad bangles made of camel bones, pendants on the foreheads, amulets around the necks, rings on fingers of feet denoting their marital status etc., seated on ground with some grave concern on their faces. The woman with fairer complexion on the right, the youngest of them all and more brilliantly costumed, seems to have recently returned from her in-laws’ house and is sharing with the other two, one in the centre perhaps her mother, some problem she is facing there. A delicate matter, none of them, though their concern is quite grave, speaks a word and keeps pondering over it. The artist has executed all figures with rare skill imparting to them great beauty, however the glow of the youth on the face and the entire figure of the youngest is exceptional. He has used varying levels of skin colour for defining their age variations. A healthy build, large thoughtful eyes, ease in postures and Rajasthan’s grace, especially as it reflects in veiling their heads alike define all figures. 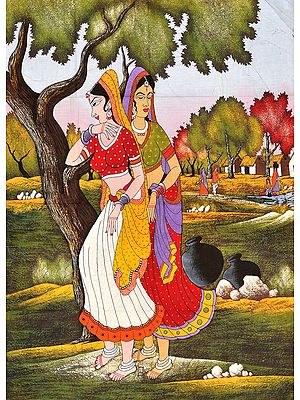 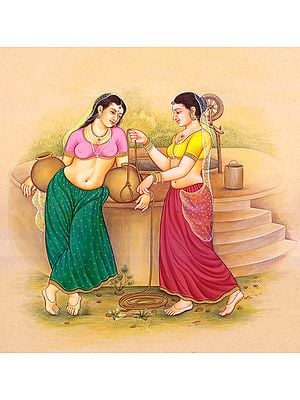