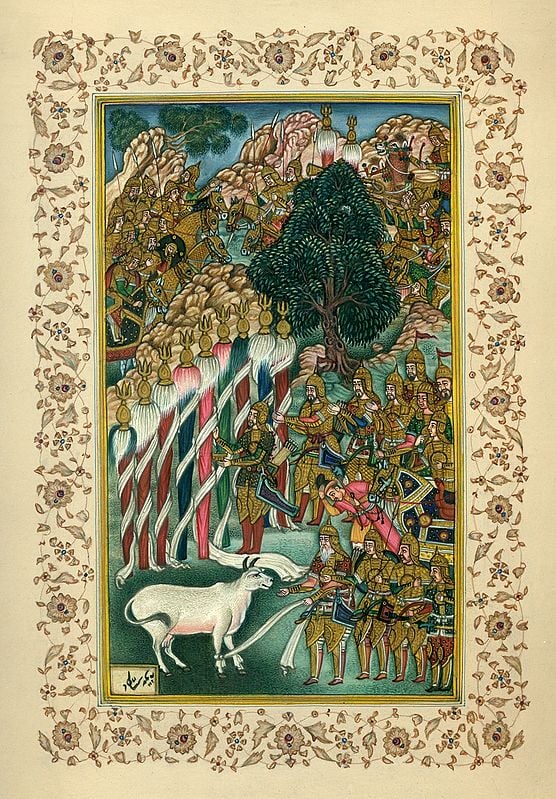 $360.00
This painting is an excerpt from the Baburnama. In this piece of art, the artist has beautifully captured many soldiers who are appareled in their golden armors as they touch nine thick sculpture like vibrantly colored structures that are topped by a trident as a large white cloth twists its way across them. It shows one of the old soldiers standing in front of a bleach white bull as a line of soldiers stands behind him. The entire battalion including cavalry fold their hands as in prayer as they face the nine exotic sculptures whilst one of them who is distinguished as a civilian like by his pink choga and an apricot orange jama bows down in reverence. The background is contrasted with lush green trees and mountain like structures as some soldiers play trumpets over their gold sheathed animals.

As for its ancient history, this incident relates to 1502 A.D. and took place at Bish-kint on the Khujand-Tashkent Road. The Mughals observed ceremonies and rules which were laid long ago by Chingiz Khan. It used to be one of their ceremonies and was thus described by Babur in his Baburnama. His exact words are as follows: "The standards were acclaimed in Mughal fashion. The Khan dismounted and nine standards were set up in front of him. A Mughal tied a long strip of white cloth to the thighbone of a cow and took the other end in his hand. Three other long strips of white cloth were tied to the staves of three of the nine standards, just below the yak-tails, and their other ends were brought for the Khan to stand on one and for me and Si MuhKhanika to stand each one of the two others. The Mughal who had hold of the strip of cloth fastened to the cow’s leg, then said something in Mughal while he looked at the standards and made signs towards them. The Khan and those present sprinkled qumiz in the direction of the standards; hautbois and drums were sounded towards them; the army flung the war-cry out three times towards them, mounted, cried it again and rode at the gallop round them."

This lovely painting is enclosed in an exquisite boundary that is carefully etched with floral designs complimented by a beige and rose gold color as gem like blue pistils beautify this scene. This painting is remarkably carved to steal away the breath of the spectator thus being your topmost choice for a household wall ornament.