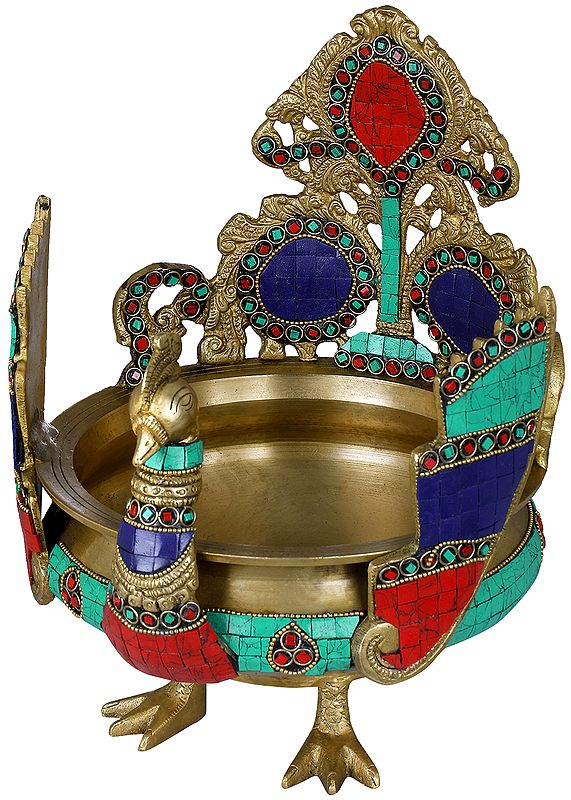 This one shown here is a rarely found exclusive artefact of its own kind, formed in an eye-catching formation of a peacock, symbolizing the nature, nurture and beauty of the national bird. This large bowl, named as urli was traditionally originated as a cookware utensil in homes and palaces and was also used in ayurveda for mixing medicines, but with the emergence of advanced technology and upgraded society, these uses of urli have been replaced by other modules and ways. In the current era, it is used as a major home décor ornamentation; carved in distinctive designs, colors, shapes and sizes, it beautifies the vacant place in an alluring manner.

This peacock urli is crafted in a manner such that the large bowl in the centre forms the peacock’s body and a long neck protrudes out from the front, jewelled in gold treasures and multicolored reconstituted stones decorate the remaining surface; the two standing bars in triple layered colors on either side form the wings and the large structure at the back, carved in stylized ethnic designs is the charming tail of the peacock. Also have a look at the supporting legs of the urli, shaped like that of a peacock’s legs. Apart from its prioritized briefings of face features and other patterns, this statue is charmingly decorated in tri-colored reconstituted stones in an elegant and royal way.

This urli is itself an accessory of decoration, but you can also use it by filling the bowl with water (normal or scented) and put some flower petals or floating diyas to further enhance its charm.