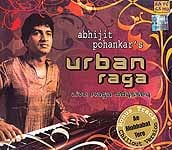 $28.00
Notify me when this item is available
Save to Wishlist Send as E-card Share by Email
About the Author

Abhijit Pohankar is the only Indian a play Indian classical music on a keyboard a feature which is extremely rare. He has been learning Indian classical instrumental music form world renowned Santoor Maestro Pt. Shiv Kumar Sharma.

Critically acclaimed and commercially successful he has created more than 20 albums internationally.

He has a global audience for his type of chill out lounge music with an Indian feel that is now a big brand in itself. He has experimented successfully introducing Indian classical elements of vocal music with up beats an chill out music arrangements.

Abhijit Pohankar is singularly responsible for making Indian music fashionable amongst the youth and he has a huge fan base in all the age groups. His efforts have made people believe in a new sound for the future of Indian music for years to come and has attracted the youth towards Indian music which is a huge socio cultural contribution.

Urban Raja is a new age presentation of traditional music Abhijit Pohankar’s Urban Raga featuring maestro. Pandit Ajay Pohankar explores the alchemy between traditional Indian music and contemporary sounds textures and music arrangements. The result is a stunning tapestry of sounds that can mesmerize any audience young or old. Indian traditional music along with dreamy strains of strings and winds rhythmic grooves and the use of harmonies and chords of the guitar rendered in the traditional and authentic style in a velvet voice which maestro vocalist Pt. Ajay Pohankar is gifted with provides for an out of the world experience fusion of world music sounds with Indian classical music has never been done in such an aesthetic and cogent manner till the Pohankars arrived on the scene and made a mark with the success of their album Piya Bawari A perfect combination of traditional sound and experience with a futuristic vision that is Urban Raga. The sounds and vibrations of Urban Raga are the sounds and vibrations of tomorrow’s generation experience the alchemy of tradition and modernity sensitivity and gravity Urban Raga.