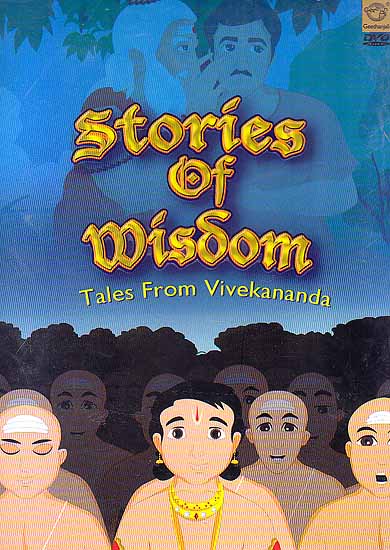 Swami Vivekananda was born in Calcutta on 12th January 1863. His father was a renowned lawyer of his time and lived an aristocratic but pious life. His mother was the embodiment of wisdom and simplicity. She taught Narendra who would later be known as Swami Vivekananda the true meaning of Hinduism and introduced him to many mythologies stories from the Ramayana and Mahabharatha. She taught him the values of truthfulness honesty and simplicity and to be fearless like Hanuman Narendra was very scientific in his attitude and would not simply accept anything without valid reasoning.

Sri Ramakrishna the great Master won over the mind and heart of young Narendra with hiss simplicity and profound knowledge of the Advaita Vedanta. At Sri Ramakrishna’s feet Narendra learnt and realized the true spirit of the Vedanta philosophy and gradually evolved into Swami Vivekananda.

The stories that his master taught him were in turn recounted by Swami Vivekananda to his Students. This DVD contains an exclusive collection of these stories.

Frog in the Well

Moral – The Knowledge one possesses is little and one should be receptive to others points of view.

Mora – Opportunity knocks but once. One should make intelligent and proper use of every opportunity that presents itself.

Moral – One should not br greedy and should acquire wealth by right means alone. It is foolish to attempt to change the world which is impossible even as the curly tail of the dog cannot be straightened.

Moral – Maya is so powerful that it makes one go astray. Eternal vigilance and true devotion to God alone will save one from Maya.

Moral – Each person is great in his won place. But the role and the duty of one differs form the other.