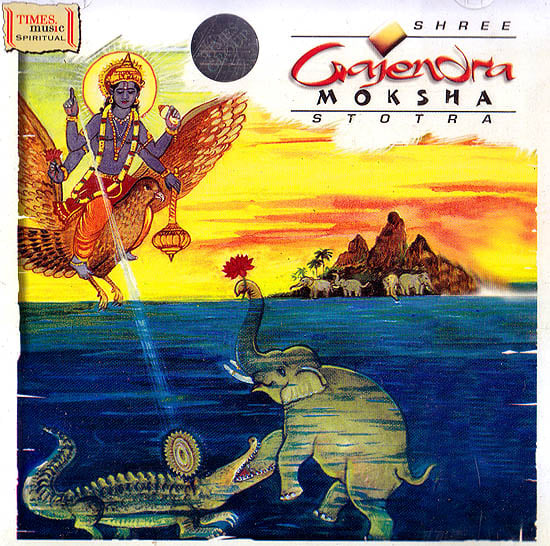 $22.00
Ships in 1-3 days
Notify me when this item is available
Save to Wishlist Send as E-card Share by Email
About the CD

The story is not just a story of an elephant and a crocodile it is about the man his ego and his selfishness. The man is surrounded by so many illusions Maya that he becomes egoistic. For him nothing is stronger than himself. But when any problem or the dark image of his works come face to face only then he learns about his true position which is no less than hollow and fake one. This is the time he regrets and surrenders himself to the almighty.

The great book Bhagwat Puraan says that who so ever will chant or listen to the Gajendra Moksha regularly to him success and fame will come naturally without him failing into the trap of Ego and worldly attachments. And he’ll not have bad dreams or suffer from nightmares.

Gajendra Moksha is also based on one such story. Gajendra Chief of elephants was once enjoying himself while bathing in a lake in the company of his large family. He was so engrossed in his enjoyment that he didn’t notice a crocodile approaching the crocodile caught hold of his foot and tired to get him down. Thus the battle between the two strong animals started. But crocodile beings an aquatic animal was more powerful in water thus was able to pull the elephant more. Gajendra unable to release his foot from the strong grip of the crocodile prayed to the almighty. His prayer was immediately answered and he was rescued was prided MOKSHA from the clutches of Crocodile.

Sri Chaitanya Swampradayachrya Shri Veni Gopal Goswamiji was born in the lineage of Sri Gopal Bhatta Goswami the successor to Sri Chaitanya Mahaprabhu on Sharad Purnima in 1961 in the city of Vrinidaban the playground of Lord Krishna. He obtained a Bachelor’s degree at the Benaras Hindi University in Sanskrit philosophy. Ancient Indian History and Archeology. Latter he joined centre for advanced studies in Sanskrit at Poon’s University for his master’s degree in Vedanta. In pursuit of higher learning Venu Gopalji returned to Varanasi Sitting at the feet of his guru Prof. T.R.V. Murti deeper meanings of Bhakti Shastra were unraveled to him.

The five hundred year old family tradition of preaching Srimad Bhagvat Purana has been passed on to him by his father Sant Sri Purushottam Goswamiji Maharaj who is a leading authority on it himself.

In ancient India the hymns for the Vedas were recited with music. Keeping the same tradition alive Venu Gopalji has evolved a unique style of singing shlokas of Bhagvad Purana and explaining them. He received his formal training in Indian classical Music from the renowned vocalist Sri Padmavibhushan Pandit Jasraj.

Goswamiji has preached for over a decade in 56 cities of 22 countries his teachings have benefited many in solving problems in their daily lives. He believes that the teachings of Bhagwat Purana can remove the suffering in Kaliyug. Sant you Gopal Goswami is a young Acharya in Radha Raman one of the oldest temples of Vrindaban.