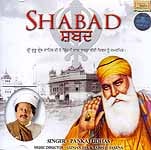 $22.00
Notify me when this item is available
Save to Wishlist Send as E-card Share by Email
About the CD

Times music presents Shabad an exquisite album in the melodic voice of Pankaj Udhas with the most pious and holy verses from the sacred Sri Guru Granth Sahib. The album has a soft touch to it and the musical renditions of these sacred verses have been rendered in a way by Pankaj Udhas that they will take you to a realm of devotion and peace.

The year 2008 marks exactly 300 years since Sri Guru Gobind Singh the tenth Sikh master invested the almost 1400 page tome that was the Adi Granth as the Guru Granth eternal Living guru of the Sikhs and the repository of their entire spiritual heritage.

Twenty five million Sikhs around the world including about half a million in the US are celebrating the declaration of Sri Guru Granth Sahib the Sikh holy scripture as the eternal guru of the Sikhs by the 10th and the last Sikh Guru Sri Guru Gobind Singhji on October 20th in 1708 at Nanded in Maharshtra.