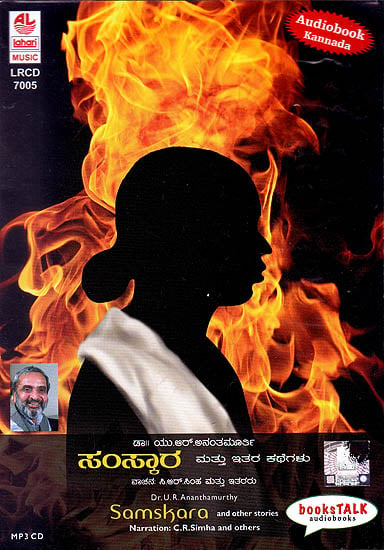 Samskara has attained iconic status in the pantheon of literary gems in the Kannada language. It is hailed as a unique literary piece in the Navya tradition. The novel is an relevant today as it was nearly 50 years ago when it was first published.

Values tradition Mores- Rationality Rituals Humanity the eternal conflict between these ideas is the crux of this novel of Praneshacharya’s conflict the question of Naranappa’s fate. Chandri’s existence and the plight of the town. The listener becomes one with the characters and the story. This complex novel has the power to become an unforgettable experience.

A legend in Indian theatre C.R. Simha has a vast repertoire spanning over half a century on stage and in films. Tughlak Otheloo Che Guevara Typical TP Kailasan & Karna are some of his milestones.

Rekha Tantri is a multi talented personality associated with the reputed theatre group Vedke She has enacted lead roles in Shakalaka Shakara Soul for life and other plays. She is popular Rj on Rainbow FM and AIR. She has been a CA with leading multinational corporation.

Ritwik is an actor writer and director. He is associated with various groups like Nataranga Vedic and BLT. He has acted in major productions like Agni Matthu Maley Haavu Yeni Court Martial Taledenda.