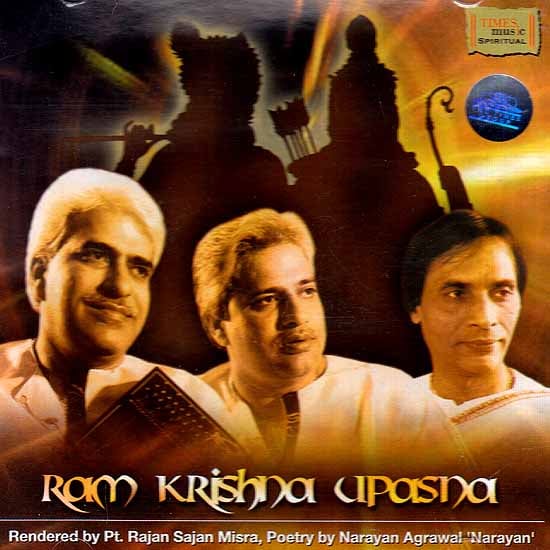 In this album Pandit Rajan Sajan Mishra create a sphere of healing bliss through the devotional charisma of chosen Bhajans. “Ab Kripa Karo” set to the Raag Piloo is considered to be a light classical Raag. It is a humble submission to Lord Ram. Pandit Rajan Misra believes that the use of Komal Gandhaar with a touch of Madhyam has been deliberately used to unhance the emotion of the poem. “Chalo Man” rendered in Raag Nat Bhairav with a slight shade of Kirwani stimulates every listener’s innate spirituality thus enabling them to experience spiritual ecstasy. In this song the word ‘or’ has been musicalized with the help of Komal Rishabh though ‘Nat Bhairav’ as such does not contain Komal Rishabh. However this addition immensely adds to the appeal of the poetry. “Krishna Krishna Kahe Na Bole” has been tuned in Raag Tilak Kamod and Desh. “Shri Ram Hai Sab Ved Udgam’ has been turned in Raag Gara & Bhinna Sharaj.

“Lyrics of these bhajans have inspired me - they awaken the spiritual of devotion in our minds” confesses Pt. Rajan Misra. He along with Sajan Misra sings these compositions with rare fervor, drenched in spiritual bliss.

In this modern era Shri Kavi Narayan Agrawal ‘Narayan’ has been recognized as a popular respectable lyric writer of the Sant Sahitya tradition. He only writes Bhajans. Top Classical artistes like Pandit Bhimsen Joshi, Gaan Saraswati Kishori Amonkar, Pandit Jasraj and Dr. Balamurli Krishna have already lent their voice to his lyrics. The top most classical artistes have found the Bhajans of Shri Narayan Agrawal the most ideal for spiritual singing. According to the satvik and vaishnav parampara, Kavi Narayan’s lyrics are full of pure dedication and rich in “Das Bhav”. Narayan Agrawal has been awarded the title of ‘Bhajan Ratna’ by the Government of India and has been felicitated for his beautiful creations. When asked about the secret of his Bhajans full of wisdom and splendid spiritual beauty, Shri Narayan Agrawal said that he creates what comes out from within and that at this moment he is completely lost and in immersed a state of trance with his Lord Rama & Krishna. This sheer dedication anoints to produce such beautiful poetry.

Voices for deep within - Rajan and Sajan Misra

“When we sing, we are one soul singing, even though we are in two bodies,” say Pandit Rajan and Sajan Misra, the most successful Hindustani vocal duo of our time. Born in the famous Banaras Gharana, Pandit Rajan and Sajan Misra are not only highly regarded singers but also the foremost exponents of Benaras Vocal Gharana. Trained in vocal music under the able guidance of their father, Pandit Hanuman Misra, they received further training from the famous sarangi player Pandit Gopal Prasad Misra and Pandit Bade Ramdas Misra.

The brothers sing with a passion nonpareil. They possess very well cultivated voices that complement each other, and a unique ability to successfully practice immaculate co-ordination and musical understanding. In an art form where improvisation is very important, it is imperative to be able to guess the route the other person is going to take while singing together, something that the brothers do very well. Their habit of dwelling deep into the study of music has provided their singing an unmatched depth and charm. The Hindu goddess of music and learning has amply showered her blessings on them: Rajan is a postgraduate in sociology and Sajan is a graduate from the Banaras Hindu University. Music for the brothers is thus an act of sacred devotion and gratitude towards Goddess Saraswati. This they express through the renditions of their Khayal, Tappa and Bhajans. It is also expressed in the individual feel of each Raag as rendered by them. Their voice has reached almost every part of India through their performances and appreciative audiences have even flocked to hear them in their many performances abroad. And yet their soul still yearns to go beyond, into the unknown.