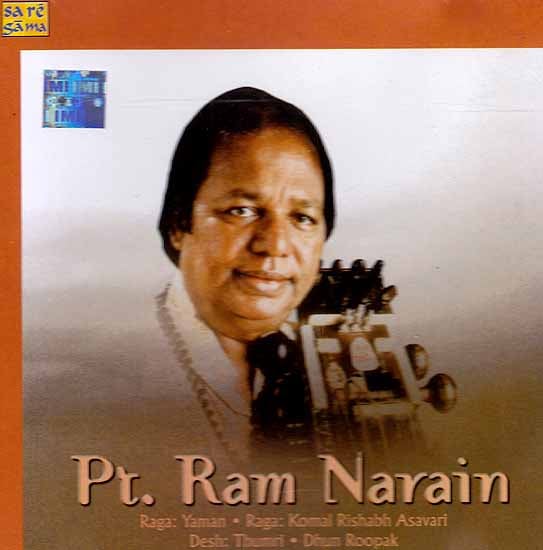 $28.00
Ships in 1-3 days
Notify me when this item is available
Save to Wishlist Send as E-card Share by Email

Sarangi's greatness is that Its tone comes closest to that of human voice. Sarangi is constructed from a single block of wood usually 'tun' which has been seasoned for one year. A Sarangi is generally 67cms. long with the belly (pet) hollowed out in the front and the neck (chhati or sina - literally chest) and head (dimag) hollowed out in the back. The head (dimag) consists of two pegboxes. Thus a Sarangi contains four separate chambers. The Sarangi usually has 35 resonance and three heavy gut strings. The shaft of a Sarangi bow (gaz) is made from a hard wood 70 cms. in length and round in section. It is strung with horsehair. Rosin is applied to the hair frequently.

Pt. Ram Narain was born on December 25, 1927 in Udaipur. His father Shri. Nathuji Biawat used to play Dilruba but was not a professional musician. However he gave Sarangi in the hands of his son and taught him the correct fingering techniques for Sarangi. Thereafter Pt. Ram Narain learnt basics of Dhrupad Dhamar from Pt. Udailalji of Udaipur. Then he moved to Pt. Madhav Prasad, a singer from Maihar, where he developed systematic approach to Khayaal. After learning with him for four years Pt. Ram Narainji took up a job of a music teacher in Udaipur. In 1944, Pt. jivanlal Mattoo selected him as a Sarangi - player at Lahore Radio Station. On Pt. Mattoo's recommendation Ustad Abdul Wahid Khan too taught Pt. Ram Narainji. In playing Aalap and Jod, Panditji has been influenced by Ustad Ziauddin Khan Sahib (Dagar). In Lahore he enjoyed accompanying at least twenty great singers who had settled there. He used to play for average four to five broadcasts a day. In 1947, after partition he came to AIR Delhi and stayed there for two years.

In 1948 while accompanying Ustad Amir Khan in a programme he realised that the Sarangi can be an emancipated solo instrument in his hands. Pt. Omkarnath Thakur, Pt. Krishnarao Shankar Pandit, Hirabai Badodekar and Gangoobai Hangai were instrumental in bringing him to Mumbai. Musically receptive Mumbai audiences welcomed his views and performances. Now Panditji is an artiste of international repute and has been a pioneer of many innovations in Sarangi - play. Somewhere during 1947 he was the first to fix the keynote to F Sharp and others followed. To play gamak in a different way he began using a slight vibrato. He makes all kinds of rhythmical variations with his bow. He uses four octaves. He, In association with Neil Sorrell, has written a book titled "Indian Music in Performance - A Practical Introduction"

After accompanying Ustads Nazakat - Salamat in the early sixties, Pt. Ram Narainji has remained only a Sarangi - soloist on the concert - platforms for nearly the past four decades. He has contributed a lot to the Hindi film music also.

Son Brij Narain (who plays Sarod) and daughter Ms. Aruna Narain (Kalle) are his eminent disciples. He has been associated with us from 1950 when he cut three 78 rpm records for us. In 1970 he had recorded for us Raga Yaman, Thumri (Desh), Raga Komal Rishabh Asavari and Dhun Roopak on an LP disc. The repertoire on the said LP disc has been made available here on a Compact Disc, app