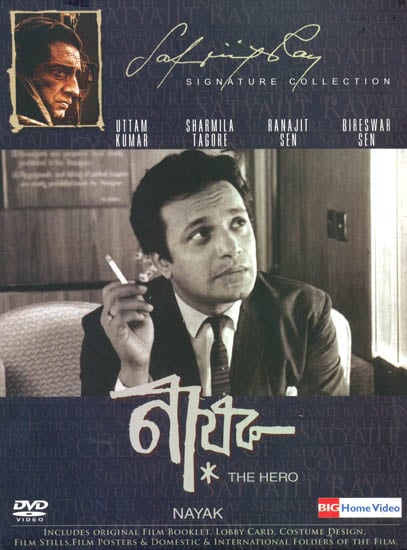 Nayak (A Film by Satyajit Ray): The Hero (DVD)

A famous film actor Arindam (Uttam Kumar), a super star of Bengali films, has been invited to the capital to receive a prestigious award. As all the flights are booked, he is forced to travel by a train from Calcutta to new Delhi he is in a foul mood as the morning’s papers are filled with his being involved in an altercation and his latest film is slated to become his first flop. In the restaurant car, he meets Aditi (Sharmila Tagore), a young journalist who edits a women’s magazine. Filled with contempt for the likes of him, she secretly plans to interview him because she thinks it would make a saleable ‘copy’. It soon leads to him pouring out his life history. Aditi takes notes, surreptitiously. Critical of the star, she interrogates him and the star ends up re-examining his life. In a series of conversations with Aditi, he reveals his past and guilt.

He talks about Shankarda, his mentor, talking us back to his early youth. His diversion to films and going up theatre against the wished oh his old teacher... His first day’s shoot, and he being snubbed by a successful actor Mukunda Lahiri. A few years Mukunda Lahiri, now a forgotten actor after a series of flops, comes to him to beg for a small part. He rejects the ageing actor in revenge. He takes refuge to alcohol and refuses to help his friends.

In the fag end of the train journey, he is drunk and contemplates suicide. He asks the conductor to fetch Aditi. He begins to confess an affair with a married woman. But Aditi stops him. It was an affair with a heartless and ambitious Promoila, which ended in a brawl with her husband.

As the star re-lives and examines his life with Aditi, a bond develops between them. Aditi realises that in spite of his fame and success, Arindam is a lonely man, and needs her sympathy and understanding. Out of respect for his frank confession, she chooses to suppress the story and destroy the notes she has written. She lets the hero preserve his public image.

Satyajit Ray, was a towering figure in the world of cinema. He studied at Calcutta University and later joined Shantiniketan, Rabindranath Tagore’s university to study art. Ray began his career as a commercial artist (1943-56). He founded Calcutta’s first film society in 1947 and made his first film, Pather Panchali (1955) while working at an advertising agency, Pather Panchali was an immediate success and won grand prix at the Cannes festival. The success of Pather Panchali gave ray total control over his subsequent films. Two sequels based on the novel (Aparajito – The Unvanquished, 1956; Apur Sansar – The World of Apu, 1959) completed the acclaimed ‘Apu Trilogy’. What followed was a long career as a long career as a world – class filmmaker. Until 1981, he would make a feature length film every year. His later films included – Parash Pathar (The Philosopher’s Stone, 1958), Jalsaghar (The Music Room, 1958), Devi (The Goddess, 1960), Teen Kanya (Two Daughters, 1961), Kanchanjungha, (1962), Mahanagar (The Big City, 1963), Charulata (The Lonely Wife, 1964), Kapurush-O-Mahapurush (The Coward & The Holy Man, 1965), Nayak (The Hero, 1966), Goopy Gyne Bagha Byne (Adventure Of Goopy & Bagha 1970), Shantraj Ke Khilari (The Chess Player, 1977), Joi Baba Felunath (The Elephant God, 1978), Ghare- Baire (Home and The World, 1984) and Shakha Proshakha (Branches Of The Tree, 1990). In 1961, Ray revived Sandesh, a children’s magazine founded by his grandmother, to which he continued to contribute illustrations, verses and stories throughout his life. He made a significant contribution to children’s literature in Bengali. Most of his fiction was written for teenage children. His detective stories and novels were particularly popular with them.

His stories are unpretentious and entertaining. The subjects included: adventure, detective stories, fantasy, science fiction and even horror. In 1992, he accepted Lifetime Achievement Oscar from his sickbed in Calcutta through a special live satellite-television event and Bharat Ratna the ultimate honour from India.

Farewell My Friend: A Living Legend's Tribute to the Legend, who is no more (Satyajit Ray) (Audio CD)
$28
FREE Delivery

Charulata: The Lonely Wife by Satyajit Ray (DVD)
$28
Out of Stock

Satyajit Ray Three Movie Pack: Agantuk (The Stranger), Ganasatru (An Enemy of the People), Ghare-Baire (The Home And the World) (Set of 3 DVDs with English Subtitles)
$30
FREE Delivery

Shakha Proshakha: Branches of A Tree (A Film by Satyajit Ray) (DVD)
$28
Out of Stock 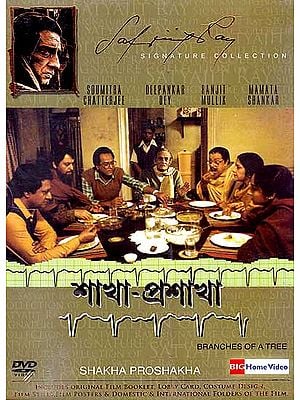 Branches of a Tree: Shakha Proshakha (Bengali Film DVD with English Subtitles)
$27
Out of Stock
Add a review
Have A Question