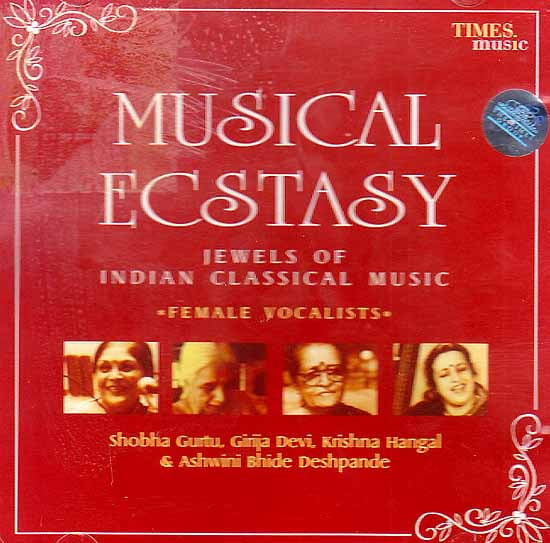 Daughter of renowned singer Gangubai Hangal Late Krishna Hangla trained in the Kirana Gharana by her mother and provided glimpses of her prodigious talent early on in her career. Born in Hubli, Karnataka, Krishna Hangal benefited immensely from the grooming that she received from her mother form an early age she used to accompany her mother for concerts. Her naturally sensitive and melodious voice combined with the intense training that she underwent resulted in a distinct individual style fluid in expression and abundant in emotive content.

She was a regular performer for all India Radio and Participated in all important music festivals including prominent one like Tansen Festival Gwalior and Sawai Gandharva Festival Pune She was a recipient of many honours including the Rajyotsava. Award Chandrahas award and Shiromani Award she also received the Karnataka Gaana Kala Tilaka from the Karnataka Sangeet Niritya Academy.

Girija Devi has been powerful exponent in popularizing the tradition of Indian classical music across the land. Born in Banaras in 1929 she started music lessons at the age of five from well known singer and sarangi player, Pandit Sarju Prasad Misra and continued her training with Pandit Chandra Misra. Her music is steeped in the roots of the land. Her gayaki is a melodious blend of Ango Seniya Gharana and the Banaras Gharnaa. She is not only one of the leading vocalists in the dominant classical genre of the Khayal but also I lighter forms of north Indian classical music including tappa, tap-khayyal holi chaiti, Kajri and dadra. She specializes in the purbi ang also made famous by siddeswari Devi and Begym Akhtar.

She is also an accomplished composer and has composed many bandishs and thumis. A grateful nation has bestowed many awards on Smt. Girija Devi such as Sangeet Shiromani Padmashri and Padma Bhushan.

Amongst the vocalists of the younger generation of the Jaipur Atrauli Tradition of Khayal singing Ashwini bhide Deshpande is an artiste of great Caliber. Born into a family with strong musical traditions she began her classical training at the age of five under the guidance of Pandit Datar. After graduating with a sangeet Visharad from Gandarva Mahavidyalaya she started receiving guidance from her mother Smt. Manik Bhide a great khayal singer herself Ashwini has inherited all that was best in her mother’s style and has been able to add a lot to he repertoire with great sensitively and intellect. Presently she is receiving guidance from Pandit Ratnakar Pai, a veteran of the Jaipur gharana. Systematic exposition of the Raag structure brilliant phrasing variety of taan patterns ease and grace in all of the three octaves make her singing an aesthetically pleasing experience.

Many try to sail through the ocean of music but only few like shobha Gurtu reach the shores of glory. Born in 1925 in Belgaum she was blessed with melody and rhythm. Her first guru, her mother, Srimati Menakabai Shirodkar was a noted dancer and a proficient classical singer. She nurtured her daughter with euphonic sense which was clearly evident in her voice at the age of five later Shobha Gurtu received training from Ustad Nathan Khan for classical singing and Ustad Ghamman Khan for light classical and popular music. They chiseled her talent to accomplish the exclusivity in her voice.

Gradually Shobha Gurtu developed a unique style that allowed her to merge with equal ease the subtle regional and stylistic variation found in thumri, dadra, hori, kajri, chaiti, ghazal bhajan and marathi natya sangeet musical forms. Her sovereign voice and its exceptional seasoning left all ablaze. She was crowned with the title of Thumri Queen Numerous awards were bestowed upon her including the Sangeeth Natak Academy award in 1989 and the Padma Bhushan from the Government of India.