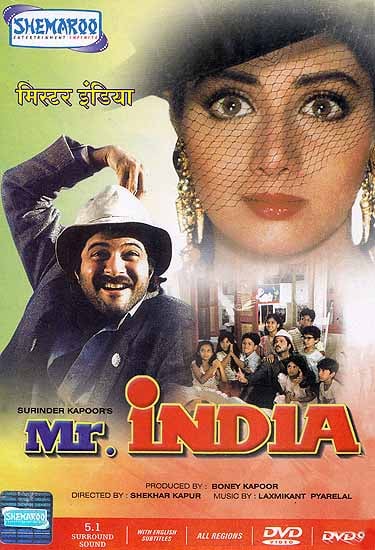 FREE Delivery
$22
Quantity
Ships in 1-3 days
Notify me when this item is available
Arun (Anil Kapoor) who lives in an old spacious rented house, rescues orphans and looks after them. He is aided by his Calendar (Satish Kaushik) the cook and odd job man. When journalist Seema (Sridevi) also takes up residence in the house there is trouble. She despises children and this brings about a love-hate relationship between Arun and Seema. One day Arun discovers something his scientist father (Ashok Kumar) had hidden, a hidden, a secret formula to make one invisible. Arun uses the formula to save the country from the evil Mogambo (Amrish Puri), a villain to beat all villains. Seema falls in love with Mr. India (that is what Arun is when he is invisible), without even having seen him, not realizing that they are one and the same.
About the DVD

Did You Know that

Sridevi was termed as the “Hawa Hawaii” girl and her sexy stint in the “kaaten nahi kat te” song is still considered as one of the best in Bollywood.

• Aftaab Shivdasani and Karan Nath appear as child artists in the movie.

• Amrish Puri wasn’t the original choice for the role of Mogambo. It was titled for Danny Denzongpa but Shekhar Kapur opted for Amrish at last.

• Amrish Puri was a late entry in Mr. India. The film was almost 60per cent complete without him when they decided to take him on as the villain.

• The line “Mogambo Khush Hua” become quite a rage. It’s even become synonymous with Amrish puri.

• Shekhar Kapoor is Qualified as a chartered accountant from the institute of charted accountants in England & wales. He abandoned his profession.