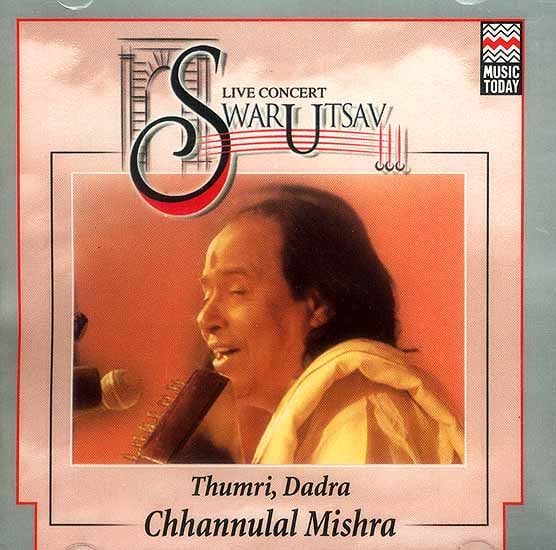 Although Thumri and Dadra are mainly associated with female singers, it is not usual for men to Perform these song types too. Not so rarely one comes across a male voice whose rendering of this repertoire not only shows great mastery but also artistic abandon. Chhannulal Mishra comes from a traditional family of kathaks of Benaras and is widely acknowledged as perhaps the few last great exponents of this genre. His musical renderings and his communicative prowess at the Swarutsav were a great hit with the audiences.

Nothing binds this subcontinent more than its musical traditions. From Bhajan to Khayal and Qawwali to Rajasthani folk songs, while there is a rich diversity of forms of musical expression in every region, there is also an underlying thread of commonality of spirit.

So as India's premier news magazine, India Today, completed a quarter century of documenting the life and joys of our great country, it held a unique and mammoth festival of music in the heart of Delhi's Connaught Place to celebrate the event.

At a time when big, open air musical events are at a wane, The India Today Swarutsav 2000 spanned five sessions over four days comprising devotional music, the romantic semi classical genres, classical instrumental and Khayal, Sufi music and Creative Fusion. In the stunning open air ambience of a specially erected stage at the Central Park in Connaught Place, some of the best and leading musicians from across the subcontinent gathered to give electrifying performances to regale a huge audience comprising both connoisseurs and lay listeners. Swarutsav looks forward to becoming an annual event in India's cultural calander.

As we promised at that time, Music Today is now proud to present the Live at Swarutsav 2000 series as a unique collectors' item.

Songs of romance and longing
Thumri, Dadra, Geet and Ghazal

The second session at India Today Swarutsaw 2000 was devoted to the romantic semi-classical genre of Thumri, Dadra, Geet and Ghazal. Thumri, derives its name from the hindi word thumak (the sway of the hip), it spans the sensuous and the sublime in its themes. Deriving from the Hori-Dhammar tradition on one hand, it is also linked to the rustic folk melodies on the other.

Geet is a simple song in Hindi or Urdu usually of a romantic nature. Ghazal is an old Persian form of mystical and romantic poetry developed by the Sufis in Iran. It was adopted and developed in Urdu in the Indian subcontinent with great sensitivity and gusto over the last three centuries. It is considered to be the highest form of poetic expression in the Urdu language.