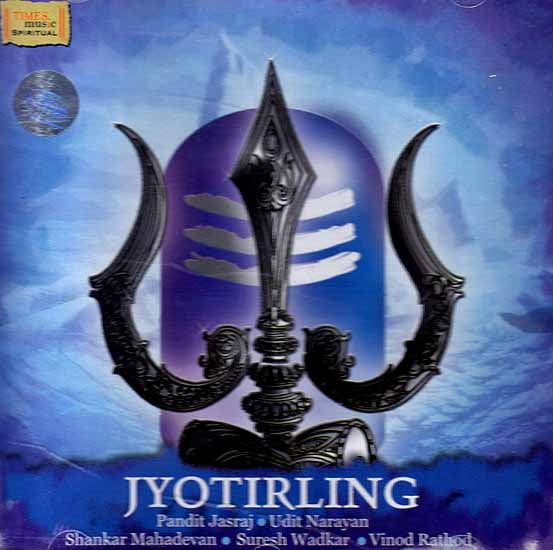 FREE Delivery
$28
Quantity
Ships in 1-3 days
Notify me when this item is available
From the CD :
I. Somnath

An interesting story is associated with the emergence of this Jyotirlinga situated in the Veraval (Prabhas Kshetra) in Kathaiwad district. According to the Shiva Purana it was on the request of the Chandrama and other Gods that Bhagwan Shankar assumed the name somchandra (Jyotirlinga) and resided there eternally. He became famous by the name of Somnath in the three worlds. It was the Prabhas Kshetra where Bhagwan name Shri Krishna performed all his lilas.

Bhimashankar Jyotirlinga is situated in the north of Pune, on the Sahayadri, by the banks of the river Bhima. Pleased by the devotion of a king named Bhimak of the Sun dynasty, Lord Shiva caked the Jyotirlinga in his name. However, the Shiv Purana states that Bhimashankar Jyotirlinga is situated on the Mountain Brahmapur, district Kamrup of Assam, where Lord Shiva had incarnated so that he could destroy the demons and protect his devotees. On the sincere request of the Gods and sages he agreed to reside there eternally by the name of Bhimashankar.

The Jyotirlinga named Ghrushmeshwar, Ghrushmeshwar or Ghurushmeshwar is situated in a village called Verul, approximately 100 kms from Manmad station. The Shivpuran speaks of the emergence of the linga through the following story. In the southern direction, on a mountain named Devagiri there lived a Brahmin named Brahmavetta Sudharm, along with his wife Sudeha. They did not have a child of their own because of which Sudeha got her sister Ghushma married to her husband. By the blessing of Lord Shiva Ghushma was blessed with a beautiful fortunate baby boy. This made Sudeha jealous towards her sister and so one night she took Ghushma's son and killed him and threw him in a lake. The next morning, so absorbed was Ghushma in worshipping Shiva, that she did not deter even when she was told about her son's death. She said, he who has given me this child shall protect him, and started reciting 'Shiva-Shiva' continuously. Pleased, Lord Shiv appeared before her and told her that her sister had killed her son. Ghushma however, told Lord Shiva to forgive Sudeha and asked him to reside there in the form of a Jyotirling eternally for the benefit of the multitudes and be known by her name.

Shri Kedareshwar is situated on the Himalayas, on a mountain named Kedar. Narnarayan, an incarnation of Lord Vishnu performed severe penance in Badrikashraya of Bharat Khand. He regularly prayed to the Shivalinga. Pleased with his undeterred faith and devotion, lord Ashutosh asked him to wish for something. Nar Narayan, requested him to reside there eternally so that all people who worshipped him would be freed from their miseries. Granting the boon, Lord Shiva assumed the form of a linga that was installed on the Kedar Mountain. This is amongst the seven holy places that can liberate a human.

According to a story, a five-year-old boy named Shrikar was enthralled seeing the devotion of king Chandrasena of Ujjain towards Lord Shiva. He took a stone and by considering it a linga started worshipping it regularly. Pleased by the boy's devotion Lord Shiva assumed the Jyotirlinga form and resided in it. This Jyotirlinga is situated below the ground in a Garbha Griha. The linga is quite big in size and is encircled by a snake of silver. On one side of the linga there is the idol of Lord Ganesha, on another side is the idol of Parvati and Kartikeya.

This is situated on mountain named Shri Shaila by the banks of the Krishna river in the state of Tamil Nadu of southern India. It is also known as Kailash of the south. It is believed that by merely seeing the tip of this mountain one is freed from all his sins and worries. The person becomes free from the vicious cycle of life and death according the Shiva Purana, when Shri Ganesh was married before Kartikeya it made Kartikeya angry, and despite being consoled by his parents Shiv-Parvati, he went away to the Kraunch Mountain. Shiv-Parvati was very sad and both decided that they would to Kraunch mountain themselves. When Kartikeya came to know that his mother-father have arrived he went away. Eventually Lord Shiva assumed the form of a Jyotirlinga and resided on that mountain by the name of Mallikarjuna. Mallika means Parvati, while Arjuna is another name of Shiva. In this way both Shiva and Parvati reside in this linga.

Shri Nageshwarnath Jyotirlinga is situated on the way from Gomati Dwarka to Bait Dwarka. According to the Shiv Purana there was once a demon called Daruk who had collected a huge army of demons and had started harassing all the innocent people residing in the sea. Amongst his prisoners there was a prisoner by the name Supriya. He was a great devotee of Lord Shiva. He advised all prisoners to recite the mantra 'Aum Namaha Shivaya.'
When Daruk came to know about this he ran to kill Supriya. Lord Shiva then appeared through a small hole and a beautiful temple with wall was formed. In the middle of the temple a lustrous Jyotirlinga was installed. In this way Lord Shiva stays and resides there eternally by the name of Nageshwar and Goddess Parvati by the name Nageshwari. According to the Shiv Purana who ever reads with devotion the story of the birth and greatness of the Jyotirlinga will get all material happiness and will attain divine status in the end.

Gods of all the Gods Lord Shiva's Omkareshwar lings is situated on the mountain Mandhata. Mammaleshwar is another name which comes in the context of Omkareshwar; however the existence of these two is actually different. It is said that once upon a time Vidhya Parvat practiced severe penances and worshipped Parthivarchana along with Lord Omkareshwar for nearly six months. As a result Lord Shiva was pleased and blessed him with the desired boon. On the sincere request of all the Gods and the sages Lord Shiva made two parts of the ling. In one he resided as the Pranav or Omkar and assumed the form of Omkareshwar and Bhagwan Sadashiva, while Parameshwar, Amareshwar or Amaleshwar assumed form from the Partivilinga.

It is said that Lord Rama installed this Linga here, when he was on his way to attack Ravana. Lord Rama made a linga of sand and worshipped it and asked to be blessed so that he could vanquish Ravana. He also requested Lord Shiva to reside eternally here so that entire mankind could benefit from it. Shiva then manifested himself and the Linga got installed there for eternity. Those who go to Rameshwar and seek Shiva's blessings, shall always reside in Shivloka. There is a Shrine named Dhanushkodi twenty miles away from Rameshwaram. It is known for rites performed for the deceased ancestors. In the vicinity of this there are a number of temples.

Shri Trimbakeshwar is situated in the district Nashik of Maharashtra state. Near this is the Brahmagiri Mountain from which the Godavari flows. Once upon a time there lived a sage name Gautam with his wife named Ahilya. The ultimate aim of their life was penance and good of others. However the wives of other sages staying in the vicinity, jealous of them, conspired with their husbands, to drive Gautam Rishi and his wife out of the area. All the sages came together and started worshipping Lord Ganesha who tried to dissuade the sage but when the sages did not listen he gave them what they wanted. The sages set up a trap for Gautam Rishi who humbly agreed to take the punishment for the crime that was pinned on him. The sages suggested a penace that only Gautam Rishi's determination could make him complete. Seeing his dedication, lord Shiva told him the truth. However sage Gautama defended those sages and pleased with him, Shiva gave him a boon. Gautam Rishi asked for the Ganga to stay there eternally for the good of all the people. On the request of all the Gods, Lord Shiva resided by the river Gautami by the name Trimbakeshwar (one of the Jyotirlingas). This Jyotirlinga named Trimbak, is the one which fulfills everyone's desires. It emancipates all from their sins and miseries.

This Jyotirlinga is situated, in the south west of Keeul station situated on the Patna-Calcutta railway route. It is said that once Ravana started worshipping Lord Shiva with mind and soul. He would partake Panchagni in the hot summer months, while staying in the cold water throughout winters. During the rains he would stay in the open fields and practice serve penance. He made a Parthivlinga and installed it. He dug a pit near it and lighted fire just beside it. The Vedic scriptures state that he worshipped Shiva in front of the fire. One by one he would cut his heads and offer it to the Lord. When he was about to offer his tenth head to the God, Lord Shiva appeared and blessed him with a boon. Ravana asked for invincibility and tremendous might and power and requested Lord Shiva to accompany him to Lanka. Shiva gave him a linga telling Ravana that the Ling would fix itself to the ground and shall remain there for eternity. He thanked Lord Shiva and holding the linga carefully started of for Lanka. On the way however, Ravana handed over the linga to a small boy who could not withstand the weight of the linga and dropped it on the ground. Despite all his efforts Ravana could not lift it This Shiva linga is the Jyotirlinga named Vaijnath. By worshipping Vaijnath Jyotirlinga one can eliminate all worries and miseries, and attain Moksha.

The Jyotirlinga is situated in Kashi and is famous by the name of Shiv Vishwanath Kashi. According to the scriptures this place was forever destroyed when the earth was submerged under water (Pralaya). It is believed that those who die here attain liberation and it is here that Lord Shiva gives the Tarak Mantra. The one who prays and worships Vishweshwar with devotion attains all his desires and one who incessantly recites his name attains all siddhis and finally gets liberated.

Centuries ago, Lord Shiva is said to have revealed himself to his true devotees in the form of a Jyoti or light. On their request to reside by them for an eternity, he installed himself near them, as Linga. Thus amongst the several lingas in the world, we have 12 which are called the Jyotirlinga. Many have described these Jyotirlinga as the divine light that emerged from the earth at the onset of creation of Mankind, while others see it as a golden egg, as bright as a thousand suns. The places where these are located are today considered to be pilgrim centers, a reference of which can be found in the Shiv Purana.