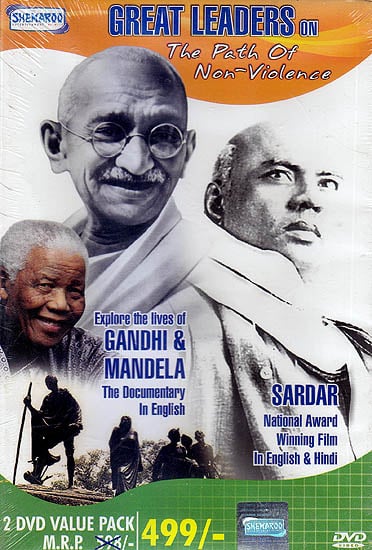 $40.00
Notify me when this item is available
Save to Wishlist Send as E-card Share by Email
About the DVD

Explore the lives of Gandhi & Mandela The Documentary in English

Mohandas K. Gandhi was a man of peace who spent most of his life preaching non-violence to gain equality and freedom for the people of India. This informative program explores his struggle against the might British Empire and her colonies of South Africa and India. It shows various historic events like the Dandi March and Non-Coperative Movement that he initiated and led India to freedom from British Empire Gandhi’s words and deeds made him one of the most influential men of the 20th century and he is therefore duly addressed as the father of the nation.

Join us as we explore the life of Nelson Mandela a true man of vision from his birth through his early days as a political activist and prisoner and finally to his ascent to the South African Presidency in 1994 by the first democratically elected parliament.

This biographical epic on Sardar Patel concentrates largely on the last five years of Sardar’s life from 1945 to 1950 when he strode on the national scene a key figure in wresting India’s Independence and integrating the nation. The film deals with all the myriad and debilitating problems that India faced in its pre and immediate post independence period which turned out to be Sardar Patel’s finest hour when problem after monumental problem was solved by Sardar Patel. The film is a tribute to the Sardar’s inestimable contribution to the making of free India a memory that can stand to face the problems of India today and tomorrow.