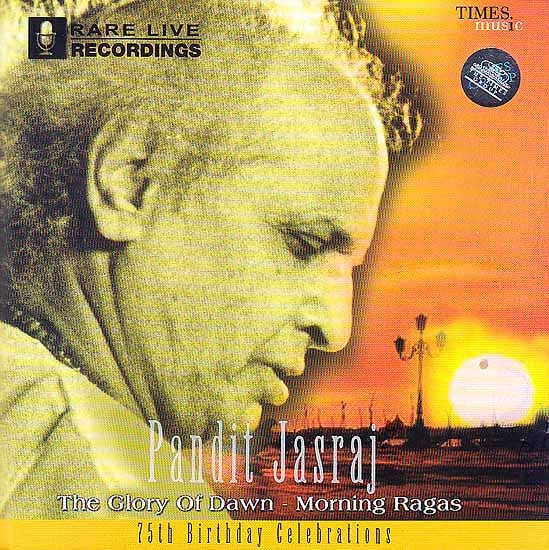 This album is a tribute as well as celebration of the years of warm and heartening companionship I have felt with all of you. An ancient Shloka tells us that during the time of the Swati Nakshatra associated wit the Goddess Saraswati rain drops trapped in oyster shells turn into the most flawless pearls. The seventy fifth birthday of Sangeet Martand Pandit Jasraj has provided us a golden opportunity to dive down to the bottom of the infinite ocean of his music and open some of these oysters thus presenting you with this string of pearls. It we have omitted any names in thanking those who have made this possible please do forgive us.

Janata mein Janardhan atma so paramatma jo Aap sab mein hai is what Pandit Jasraj says to his audience in a humble salutation to them before commencing all his concerts. With the same reverence and thankfulness the family of Pandit Jasraj presents to all his fans and admirers of few recordings taken from his concerts.

20th October 1964. The Venue was the courtyard of the Maharani Gayatri Devi College Jaipur. The Gandharva Mahavidyalaya of Delhi was celebrating its tri-annual music conference. A noted classical danseuse had occupied the center stage for a whole three and half hours and it was finally four in the morning when Pandit Jasraj’s turn came up. Waiting in his green room he had already strummend three Ragas on his surmandal. By the time he tool up the stage it was four forty five in the morning. He began the concert with the early morning Raga Nat Bhairav. It is not a very well known Raga but for the discerning listeners and connoisseurs in the audience it was a veritable treat. The shower of applause he received after the half hour presentation of Nat Bhairav at first made him think it was time to take a curtain call. But upon learning that he had simply whetted their appetite he sang on till seven in the morning. This particular concert was extremely popular and was talked about in musical circles throughout the country in those times. The vilambit presentation in Bhatiyar Koi Nahin hai Apna has been composed by Pandit Jasraj himself a result of an argument he had had with this newly wed wife, Madhura. In fact he had first sung it at the Ganeshotav celebrations at Mumbai’s Rajkamal Studios in the presence of his father in law the late movie moghul Dr. V. Shantaram. An amused Panditji recalls that after the concert his father-in-law had quietly taken him aside to enquire whether he had fought with his daughter before composing the bandish.

Niranjani Narayani in Raga Bhairavi a devotional piece in praise of the Mother Goddess is a personal favorite of Pandit Jasraj. The lyrics are written by his spiritual guru the late Jaiwantsinghji Waghela the former ruler of the princely state of Sanand in Gujarat and the Bandish was composed by his elder brother and guru Mahamahopadhyaya Pandit Maniramiji

Pandit Jasraj has been fortunate enough to elicit praise not only form his contemporaries but also form his elders. Pandit Omkarnath treated him like his own son. There is another incident where Ustad Bade Ghulam Ali Khan was listening to his concert at the Sadarang Sammelan in Kolkata. “Chacha Jaan I need your blessings for the future Pandit Jasraj requested him after the concert when he went to the former for his good wishes. “Arre, stum to sher ke Bacche ho. Tumhe kis baat kar dar hai? Sheer ali Akbar Khan the internationally renowned sarod Player and son of Ustad Allaudin Khan Sahab has always treated Pandit Jasraj like a younger brother a relationship that has grown even stronger over the years.