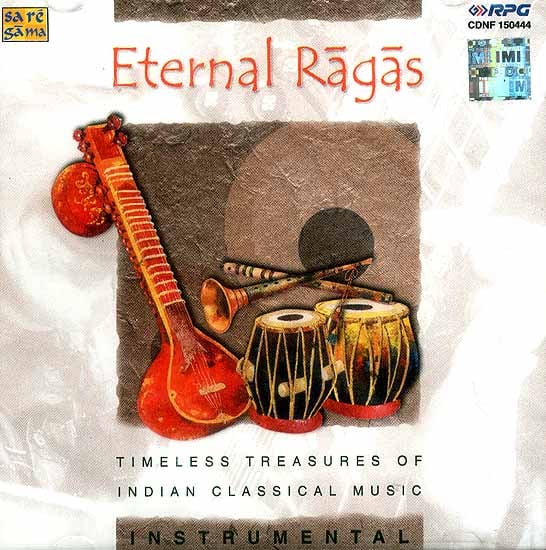 Indian Music is basically spiritual in nature. An artiste manifests his/her genius through a musical entity called raga. A raga is a matrix of musical notes with immense growth potential. An Indian Classical Musician elaborates a raga with constant improvisation. Indian Music is not pre-written. Every artiste can present the same raga in a different way.

Raga with inexhaustible possibilities inside them stand the test of eternity. Eternal Ragas, since the time immemorial have been inviting the artistes to explore into their unfathomable depth and unfold their secrets.

The Indian Instrumentalists have a dual opening on the world platform; on the one hand their instruments can speak a more universal Language of pure music and on the other hand they can present the gaayakee anga (mimic of singing) too on their instruments. A bouquet of the best performances of Eternal Ragas by the legendary Indian Instrumentalists have been presented over here. It is a compilation of prime-time recordings of the all-Time Great Indian Classical Instrumentalists who have been the Cultural Ambassadors of India over the years. All of them have an international recognition. They have expressed themselves through Wind instruments like Shehnai and Flute, Stringed instruments like Sitar, Sarod and Santoor and a Percussion instrument like Tabla. This album of the Best Indian Classical Instrumentalists and their Best Music is being released at the World Economic Forum in New York.

Artistes of this album

Ustad Bismillah Khan (Shehnai)-Bharat ratna Shehnai Nawaz Ustad Bismillah Khan gave recognition to Shehnai as a classical concert instrument. Ustadji gained his art from his maternal uncle Ustad ali baksh khan and a Delhi- based vocalist Ustad Mohammad Hussain. Ustadji can give glimpses of other musical instruments too through his Shehnai. His Shehani sings. He is a complete master of classical Semi- classical lights & folk music, His Shehani entertaines experts and laymen alike.

Pt. Ravi Shankar (Sitar)-Bharat Ratna pt. Ravi Shankar has taken Indian music to the World Platform. He learnt sitar from Ustad Allauddin khan of Maihar gharana. Panditji makes his performances attractive by making use of kritan Alankar which means playing more than one note in one pluck of plectrum. (Zamzama, gitkadi and murki come under kritant. He uses Dhrupad Anga for Aalaap & Jod tanayyat pf Khayaals in Gatkaaree. His Jugalbandies of Hindustani Sitar with the instruments of the West paved way for fusion between various disciplines of music. Creation of some new ragas and music direction of some movies are to his credit.

Ustad ali Akbar Khan (Sarod)- He is the son of illustrious Ustad Alauddin Khan, who used to play a variety of musical instruments. Ustad ali Akbar khan, however, selected and mastered such a musical instrument which is a choice of rare people. He is at present the Khalifa of Senio-Maihar Gharana. He has envisaged some new ragas. His sarod Jugalbandies with the Sitar of his Gurubandhu Pt. Ravi Shankar opened a new avenue of performances for artistes. He is working like a missionary for creation, preservation and spread of Hindusthani music.

. Ustad Allah Rakha & Ustad Zakir hussain (Tabla) - This father-son duo has created various landmarks in the history of Indian percussion instruments. They belong to the Punjab Baaz (Gharana) of Tabla. Both of them have accompanied al the legendary artistes of their generation besides, they are soloists par excellence. Ustad Allah Rakha had scored music of some movies. The world-wide trend of making music rhythm-oriented was brought in India by Ustad Zakir Hussain. The young maestro and his Tabla are a craze, world over. The father and the son together are an institution by themselves who have trained numerous disciples all over the world.

Ustad Vilayat Khan (Sitar)- He belongs to the Etawah Gharana of Been, Surbahar and sitar. This gharana is also known as imdadkhani Gharana. Ustadji was trained by his father Inayat khan, mother mother Bashiran Begum, maternal grand-father Bande Hassan khan and uncle Vahid khan. Ustad Vilayat khan developed new “zerbs” of “mizrab” that made him different from the other Sitar-players of his time. He brought gaayakee anga in Sitar.

Ustad Amjad ali khan (Sarod)- Ustad Amjad Ali khan was trained in Sarod by his illustrious father Sarod-player Padmabhooshan Ustad Hafiz ali khan. Ustad Amjad Ali khan’s performances are known for simultaneous play of power and delicacy. He has a progressive outlook. He has introduced khayaal- style on Sarod. Ustadji is a master of his instrument.

Pt. Shivkumar Sharma (Santoor)- He is the son and disciple of Pt. Umadutt sharma, a distinguished state musician of Jammu and Kasmir who had done a lot of research to elevate Santoor. Pt. Shivkumar Sharma went ahead and made Santoor a classical concert instumrnt.

Gaayakee anga meends and layakaaree are his forte. He has sought international recognition to himself and his instrument. He is an aesthete in every walk of life. He has spiritual association with Osho.

"
Add a review
Have A Question