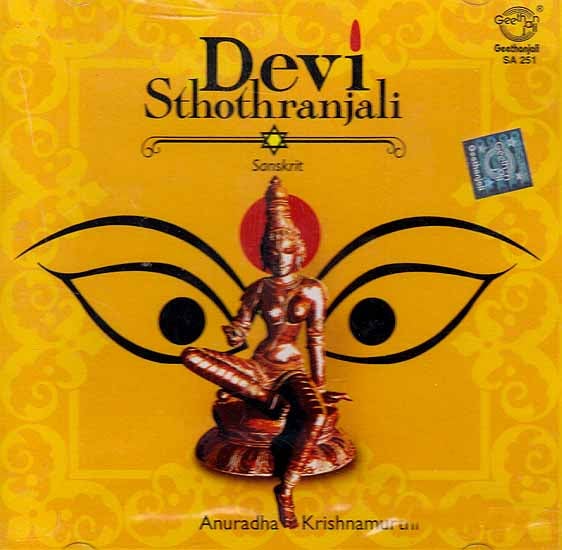 $22.00
Notify me when this item is available
Save to Wishlist Send as E-card Share by Email
From the CD

Every being in this earth is the product of fusion of energy and Matter. The quantum and the quality of vital energy ensure the wholesome functioning of the spirit and the physique. The powers of various kinds are generated from the energy and their storage or restoration relieves the mental agony and sorrows as well as the physical ailments. Our ancestors out of their experience were aware of the long tested methods of topping the source of energy to derive the maximum benefits. The contact with that reservoir of energy is established through the medium of sound and through waves. The manifestation of that manifold energy is deified in feminine form as Devi (Goddess) for meditation purpose and the contact with her is maintained though the spell of Mantras or recitation or musical rendering of stotras.

Devi is being invoked- as Saraswathi to energies intelligence, as Lakshmi for the shower of riches, as Durga for the increase of Strength. This trinity has the personifications such as Syamala, Tulasi, Sri Rajarajeswari, Amba and Meenakshi due to their permutations of Powers. The stotras sung in the divine language Sanskrit, addressing and describing the deities, derives the powers desired by the devotees. The hearing of these stotras remove the sin, poverty and enemies and it bestows health and wealth, and at last leads to Bliss.

The celebrated classical melodist Mrs. Anuradha Krishnamurthy has rendered these divine songs with the graceful music, under the guidance of the famous music director, Mr. Manicka vinayagam. This has been compiled and the pronunciation attested by Dr. R. Thyagarajan, MA. Ph.D., the Head of the postgraduate and research dept of Sanskrit, Presidency College, Chennai, Tamilnadu.