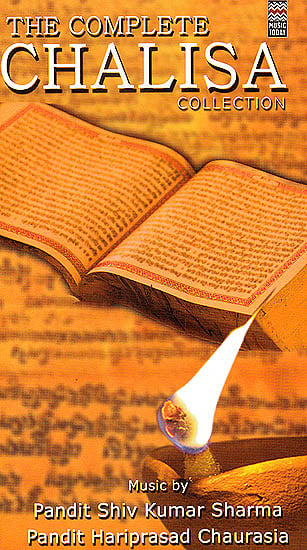 $30.00
Ships in 1-3 days
Notify me when this item is available
Save to Wishlist Send as E-card Share by Email
About the CD

Chalisa is a prayer of 40 verses that are associated with each God & Goddess. Chanting of the chalisa is believed to invoke the blessings of the deity for well being, prosperity and enlightenment in life. The chailsa specific to every deity invokes the blessing of that deity and helps in attaining nirvana.

This album presents a collection of chalisas on 9 Hindu deities. Music in this album is composed by Pandit Shiv Kumar Sharma & Pandit Hariprasad Chaurasia and has been rendered in the soulful voices of Ravindra Sathe, Suresh Wadkar, Sadhna Sargam & Devki Pandit.

This album features the entire collection of chalisas on 9 Hindu deities, which can be chanted regularly for a stress-free life. The chalisa of every deity invokes their blessing and helps in attaining nirvana.

Composed by legendary musicians and composers Pandit Shiv Kumar Sharma and Pandit Hariprasad Chaurasia, the album presents the first of its kind complete collection of all the popular chalisas.