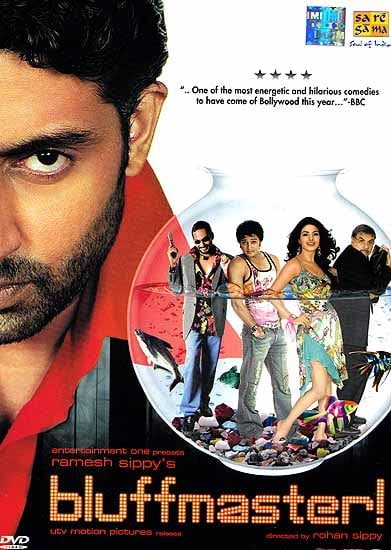 Starring: Abhishek Bachchan, Priyanka Chopra, Riteish Deshmukh, Nana Patekar, Boman Irani
Roy is a professional conman, who has raised his work to the level of an art, The only true thing he has in his life is his love for Simmi-someone who is so rooted, honest & sincere, that he can’t bring himself to tell her the reality of who he is. But when his past catches up with him, she cannot forgive him for the deceit their relationship is built on he loses her forever. That’s when Aditya Srivastav enters the picture. He is the counterpoint to everything that Roy is - as frantic as Roy is calm, as dumb as Roy is smart, as messy & untidy, as Roy is smooth. They have only one thing is conman - Aditya is a conman too. At least he thinks of himself as one. In Roy’s book, he’s an embarrassment, but one that won’t go away.

Despite himself, or maybe to take his mind off Simmi, he agrees to teach Dittu the rules of the game. In that process, he melts & warms up to the boyish charm of his student’. That’s when his world is spun upside down-he is forced to face facts that are a slap in the face. Suddenly Roy, who prides himself an being able to cheat anyone & anything. Is pushed into a corner from where there is no exit.

For the man who wears so many masks, he is now left with no alternative but to take them all off and finally reveal his real self With an outstanding ensemble cast comprising of today’s hottest and most sought after stars - Abhishek Bachchan and Priyanka Chopra (ably supported by Riteish Deshmukh, Boman Irani and Nana Patekar) and a soundtrack featuring a dazzing array of international & local talent, director Rohan Sippy’s Bluffmaster! Promises an exhilarating roller coaster ride full of laughs & emotions that are quite unprecedented.