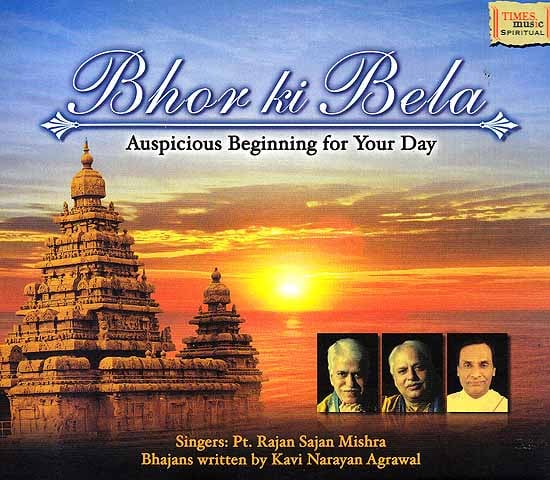 $28.00
Notify me when this item is available
Save to Wishlist Send as E-card Share by Email
From CD

Rajan Misra and Sajan Misra belong to the family of great maestros. Both the brothers have been trained in vocal music under the able guidance of their music under the able guidance of their father Pt. Hanuman Mishra, late Pt. Gopal Mishra and Gayan Acharya late Pt. Bade Ram Das Ji Mishra. Pandit. Rajan and Sajan Mishra are today the foremost exponents of the Banaras style of singing. Music for the brothers is an act of sacred devotion and gratitude towards Goddess Saraswati. This they express through their khayal, Tappa, Tarana and Bhajan singing. Their voice has reached throughout India through their performances and audience have flocked to hear them in their many performance abroad.

Shri Narayan Agrawal lyricist and poet has received wide recognition as a major poet of devotional genre. Known by his nom de plums ‘Das Narayan’ Agrawal has been acknowledge as a prime poet of devotional songs of this era by critics, wirters, Singers and the audience in general. Narayan Agrawal was born in Allahabad. He was influenced by his mother annapurnadevi and his elder brother Kunwar Chandra Agrawal. On the occasion of 125th birth anniversary of Mahatma Gandhi, legendary singer Dr. Balamurali Krishna has for the first time created a raga named Raga Mohan Gandhi which is based on the one of the Bhajans of Das Narayan’. The spiritual enivironment in which Agrawal grew up inspired him to become a devotional factor. ‘Narayanji’ is enriching the Hindi Literature with his devotional poetry. The poetic worth of his devotionals attracted maestros of classical music like Pandit Bhimsen Joshi, Smt. Kishori Amonkar, Pandit Jasraj, Dr. Balamurali Krishna and Pt. Rajan & Sajan Mishra. They willingly lent their voice to his lyrics. Scores of his verses have been recorded and are also sung from concert platforms. Narayan Agrawal has been repeatedly honored by Presidents and Prime Ministers of India. Recently, he was decorated with the prestigious ‘Prabhupad Bhakti Kala Kshetra Sarvaoccha Samman’ of the Iskcon Auditorium in Bombay. Narayan Agrawal has also been honored with the title of Bhajan Ratna by the Government of India. Narayan Agrawal is admired by devotees for his sincerity, humility, transparency compassion and a sense of commitment.