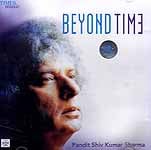 To say that Pandit Shiv Kumar Sharma has created history in the world of music is an understatement. It is an inadequate attempt to capture the maestro’s achievements and contributions. There are not many musicians in the world who can boast of single handedly bringing forth an almost unknown instrument to the level of being indispensable on the concert platform. Originally known as the Shathatantri Veena the Santoor owes its classical status to Pandit Shiv Kumar Sharma so much so that the musician and the instrument have become synonymous in the Indian music scene.

Having composed music for some of the biggest Indian films and performed in collaboration with artistes like Pandit Hari Prasad Chaurasia and Zakir Hussain Pandiji has successfully laid the foundation for aspiring Santoor player in India including his son Rahul Sharma.

Beyond time captures Panditji’s performances at the Annual Saptak Festival and brings forth a new dimension to his music this time based on raga Kirvani. This raga is known to be most conducive to the temperament of the Santoor expressing a sense of yearning in the slower tempo and a more romantic lighter mood in the faster tempo.

The Performance follows the traditional pattern of North Indian classical Music Beginning with the meditative Alap Followed by the jor and Jhalla sections which reveal depth of imagination and creativity of the performer. The Alap (track 1) is a section (track 2) is marked by the introduction of a gentle rhythmic pulse which gains intensity concluding with the lively Jhalla. The next compositions (track 3) the gat is played to fixed rhythmic cycles of sixteen beats called teentaal provided by the tabla. A medium tempo composition (track 4) leads into a lively fast tempo incorporating a stream of flowing improvisations for the climatic Jhalla section (track 5) the recital concludes with a beautifully crafted musical phrase repeated three times (tehai) played in prefect unison with the tabla performed by Shafaat Ahmed Khan.

Thanks to – The Stage crew at Virtual Studios Nandan Mehta, Prafful Shah, everyone at Saptak Kanti Dattani and verity sharp (BBC Radio/3late Junction) for inspired radio.

Mixed and mastered by Derek Roberts of Soundcraft Productions.

A deep spiritual exploration by the greatest master of santoor.