Shamvara and Vajravarahi in Yab-Yum 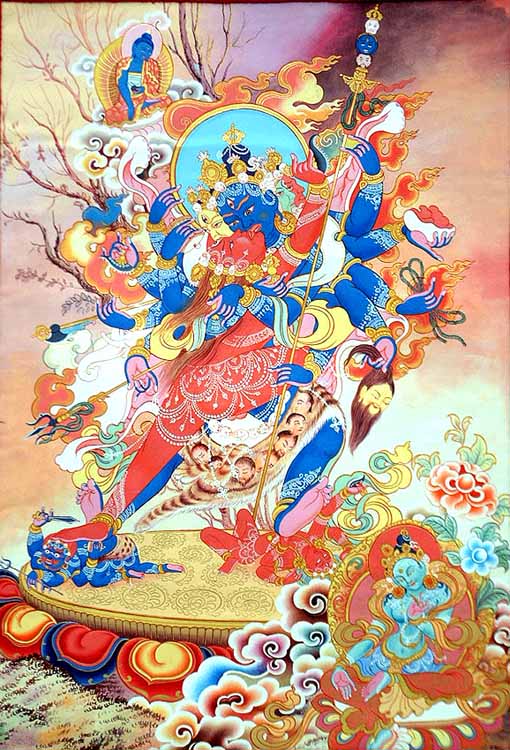 $295.00
Notify me when this item is available
Save to Wishlist Send as E-card Share by Email
Shamvara is a mystical deity, who, according to the sadhana dedicated to him, originated from a combination of all the letters in the alphabet.

His four heads, in their painted form, have the following four colors: the central one is blue; the one at the right yellow; the one at the left green; the one at the back, red. On each head is a crown of five skulls, above each of which is a flaming pearl. Each face has a third eye and an angry expression. His body is blue in color and represented with twelve arms.

He wears a long garland of heads, and a tiger-skin hangs from his waist. He steps to the left on a nude figure of a four-armed female, and on the right treads on a four-armed man with a tiger-skin covering. The whole group is on a lotus with jagged petals.

Shamvara is represented here with his shakti, Vajravarahi, whom he clasps to his breast, his arms crossed behind her back. Vajravarahi holds a skull cup and chopper. She is of cherry color, and according to her sadhana, has 'nothing but the four quarters as her garments', i.e., is represented nude.

Shamvara's hair is arranged in the coif of a yogi. This is a reminder that he was first worshipped by the wandering ascetics of medieval India, and that he shares some attributes with Shiva. According to legend, the Hindu god Shiva became the Buddhist deity Shamvara, and his teachings were brought to Tibet in the eleventh century. Both Shiva and Shamvara are supposed to dwell on Mount Kailash, a place for pilgrimage for Hindus and Tibetan Buddhists. His name too, for example, is related to Shamba (Fortunate), an epithet of Shiva.

Tibetans say that rather than having an ordinary physical form, such a deity is a congerie of pure symbolic elements. Thus, the deity's attributes are of paramount importance; they are clues to his identity and to his function in meditation and ritual. According to Snellgrove, the symbolic interpretation of Shamvara is as follows:

'His body is blue, indicating that he does not diverge from the (celestial) Dharma-sphere. Each face has three eyes, indicating that he sees the (whole) threefold world and that he knows the substance of the three times (past, present, and future). He has twelve arms indicating that he comprehends the evolution and reversal of the twelvefold causal nexus and eliminates these twelve stages of transmigration.'

Corresponding to the usual iconography of Shamvara, this image has twelve arms, each of which hold a characteristic implement. Tantric texts explain the meaning of each implement:

The first pair of hands holds, right and left, a vajra scepter and a bell respectively, symbolizing the union of skillful means and wisdom.

The second pair rends the elephant of illusion and stretches its hide out like a cape.

The drum in the third right hand shows that Shamvara's "voice resounds joyously." The third left hand holds the khatvanga staff that represents "the blissful Thought of Enlightenment."

His fourth right hand brandishes the axe that "cuts off birth and death at the roots." The skull bowl full of blood in his fourth left hand shows that he "has cut away discrimination between existence and non-existence.

His fifth right hand wields the vajra chopper that "cuts off the six defects, pride and the rest." The vajra lasso in his fifth left hand binds beings to wisdom from life to life.

The trident in his sixth right hand signals that he has "overcome the evil of the threefold world." The severed head of the god Brahma dangles from his sixth left hand, showing that Shamvara "avoids all illusion."

Each of our thangkas comes framed in silk brocade and veil, ready to be hung in your altar.