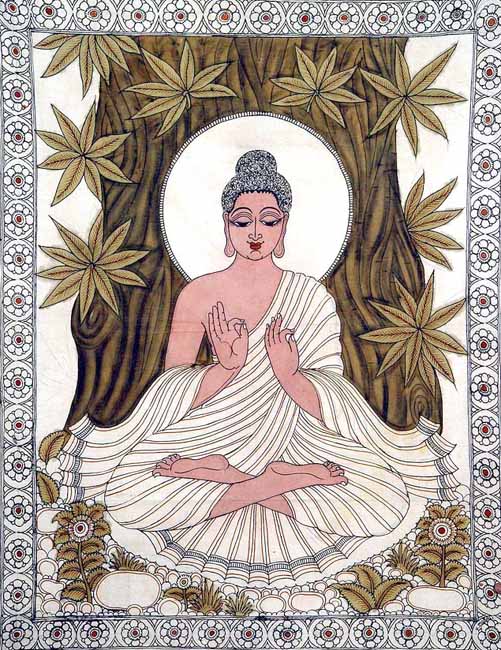 $85.00
Notify me when this item is available
Save to Wishlist Send as E-card Share by Email
This divine image of Buddha, rendered on a coarse cloth-piece, using the ingenuity of Andhra's art of 'kalamakari' and Orissa's art of cloth painting, represents him as the universal teacher, a role he chose for himself after he attained Enlightenment. Fine long fingers, round face, deep meditative eyes, sharp nose, long ears, small beautiful lips, broad forehead, transparent rosy complexion, slanting neck and coiled hair define the iconography of the 'padmasana' or the cross-legged seated Buddha. While painting this cloth-piece, the artist seems to have in his mind various traditions of cloth-painting, the 'pata', 'pichhawais', 'thankas' and the routine painted textiles. Obviously his art-piece is a mix of them all. Not strangely that he chose a piece of coarse cloth for rendering the image of the universal master. It seems, it had a meaning for him. As Buddha elevated to heights of spiritual refinement the ignorant, raw, uncultivated strata of mankind, his image elevated to votive as well as artistic heights this piece of coarse cloth. The artist seems to further resort to similar symbolism in other art motifs. He has drawn a border consisting of flowers, each comprising of eight leaves and a wheel-like double circle in its centre. Its symbolic meaning is obvious. When the wheel of Law rotates, the eight fold-path of the Buddha unfolds.

The artist seems to have an as much varied approach in his style of rendering his theme. He has painted his image using iconographic elements of the Buddhist art traditions of Sarnath, Mathura and Tibet. He has obviously copied his dressing style from the 3rd century Gandhara statue of Lord Buddha of Peshawar Museum in Pakistan. But, despite such influences, he has finally discovered in his image his own vision of the Great Lord. He has apparently portrayed the Great Lord as the teacher of mankind, but has added to such manifestation of him his other divine aspects as well. He has been painted seated under a huge tree, obviously the Bodhi-tree, though its trunk alone is visible. This relates to his pre-Enlightened stage, when engaged in meditation and penance he was heading towards Enlightenment. Further, he has painted around and under his image flowering and non-flowering creepers and plants. These plants and creepers would normally be considered as decorative elements. But in Buddhist iconography, the Buddha with such herbal plants and creepers stands for Medicinal or Healing Buddha.

The teaching Buddha is, however, the central theme of this cloth painting and as much of Buddha's great life. It was as the teacher that he redeemed mankind of its miseries and sorrows. After Buddha attained Enlightenment, he felt from within him a kind of compulsion to go round and show the world the path of redemption, which he had realised. As teacher of the mankind Buddha began his journey from Sarnath where he delivered to his five prior fellow-disciples his first night-long sermon and set the Wheel of Law in motion. They were the first converts to his Law. With them as the first members, Buddha founded the Order, the Sangha, for monks and consequently there appeared the three Buddhist jewels, the Buddha, the Dhamma or the Law and the Sangha, or the Order, and ideal for all was set- Buddham sharanam gachchhami, Sangham sharanam gachchhami, Dhammam sharanam gachchhami. For over forty years thereafter Buddha kept on travelling from village to village and from town to town preaching his Dhamma and seeking for all redemption from miseries and sorrows and from the cycle of birth and death. The gist of Buddhism, thus, lied in teaching and Buddha was world-wide acclaimed as the Universal Teacher.