Zen-Yoga: A Creative Psychotherapy to Self-Integration

This book is written in two parts. Part I contains practical methods and formulae written in simple language, which anyone can understand. SOME OF THE CHAPTERS ARE FOR ABSOLUTE BEGINNERS (so advanced readers, kindly bear with me). The practices and methods are not the basic cause of the expansion of consciousness but they are instrumental in removing obstacles, just as the husbandman prepares his ground for sowing. Some ideas may appear contradictory, not that I am of two minds, but to encourage the reader not to accept what is written, but to sit back and think. Wherever there is such a contradiction, a second reading will distinctly reveal the explanation.

In Part I, guidance and practices are recommended for the important functions of eating, sleeping, sex and breathing. This is not done with a view to presenting a new theory. All that is stated in this regard has been tried out over long periods, on many persons of different constitution, sex and age, and in each case without exception, the results have been specifically good.

Part II is written from a metaphysical viewpoint and to show the underlying basis on which the recommended exercises and practices have been built; as well as to provide further practices of an advanced nature.

In conclusion we quote the famous astronomer Kepler: "If you forgive me, I rejoice; if you are angry, I can bear it. The die is cast, the book is written. It may well wait a century for a reader, as God has waited six thousand years for an observer."

The erudite works of Dr. Saher on Zen-Yoga and allied subjects, are now known to thousands. Many books have been written on the various aspects of Yoga, so that its basic techniques are known all the world over.

It is with the greatest pleasure, therefore, that I now write a Foreword to Dr. Saher's new work "ZEN-YOGA", as it is quite unique, giving knowledge and instruction which, to the best of my knowledge, is hitherto unpublished.

The basis of this new book, Dr. Saher tells me, is a manuscript in Sanskrit which he obtained from India, and its particular value lies in the depth and detail with which this new material has been studied and presented.

Dr. Saher is to be congratulated, 'not only for his skilful translation from the Sanskrit, but also for the clarity with which he has applied this to western needs and western minds.

Much has been written in the past regarding the psychosomatic effects of Pranayama and Asanas, but in his text, Dr. Saher explains clearly the mechanism by which brain and mind operate in conjunction with bodily functions, emotions and psychic experience, and also how these may be controlled and applied for our betterment.

He also shows how specific areas of the brain control similar areas of mind, how these can be applied to Self-analysis, and by means of exercises also given in the text, so control both mind and body, that Self-Realisation is possible in the highest sense, and that even before this stage is reached, Health, Harmony and Serenity will be attained, surely to be prized for themselves alone.

For those who are already students of Yoga Dr. Saher has opened new avenues of thought, new areas of knowledge which allow the student to move into Yoga in greater depth and with greater understanding.

For those to whom Yoga is a new subject, this book will provide a worthy introduction to a way of life in which the rewards become ever richer as the study proceeds.

All the Scriptures of the world throughout the ages have proclaimed to man the need to "KNOW THYSELF". In "ZEN-YOGA" Dr. Saher has provided a sure path to this knowledge.

My Encounter with an Ustad (-an Adept of Zen-Yoga who has attained cosmic-consciousness):- Remembering the time-worn custom which requires a visitor to bring a small present when calling upon a high personage, I had brought with me a small gift. But I forgot another important custom.

I was delighted to do so because of my sprained ankle. On entering the Master's private office, I saw, at the far end in a brightly lit enclosure, an erect and stately figure, dignified yet not aloof. I approached him, set down my offering and bowed low in salutation. There is an aesthetic dimension in this ceremony which transcends its function as an expression of respect and courtesy. I eyed him in silence. His noble face, pictured in grey and brown, had that elusive element which the French aptly term spiritual. His expression was modest, mild and yet strong, and the large eyes had an extraordinary tranquillity and beauty. The nose was short, straight and classically regular, and his beard made more noticeable the gravity of his mouth. Such a face might have belonged to one of the saints who graced the Church of the Middle Ages, except that his possessed the added quality of intellectuality. Although he had the eyes of a dreamer, I felt in some inexplicable way that there was something more than the visionary behind those heavy lids. For a moment it seemed that a Self much superior to my everyday ego had assumed the guise of this oracular mystic to guide and comfort me.

"Your Eminence has indeed been gracious to receive me," I stammered.

"Your arrival does not surprise me," he replied. "Our meeting was foreordained. Much more than mere chance brings you here again. A higher power ordained and then arranged our encounter, and this is the appointed hour."

His gaze rested on me. He had the eyes of a thinker, idealist and poet, and the sufferings of mankind were reflected in those pupils. He was at once an inspired dreamer, as aint possessed of great serenity, and a practical man of affairs. His smile was friendly, and he welcomed me cordially and yet with a courtly dignity.

Now I felt like Dorian Grey looking at his own picture when it reflected an unblemished character. For the man (if, indeed, he was not something more ) appeared as the epitome of all that was divine and noble in me; as a kind of psychic projection of all that was best, yet buried, in me. This was a splitting of my being as in the psychotic states of excessive L.S.D. addiction or in the Schizophrenia of an artificially induced insanity. Yet the discomfort was experienced as blissful pain, with the pain declining until I knew only a beautific state of being.

Within minutes, I was again my usual self. His gaze still rested kindly on me. It was then that I realized I had been looking, not at him, but through him as it were, right to the hills towering in the distance.

"You gaze at our heights." He spoke with a gentle irony. "I would that all the world should do the same. Usually our guests prefer to concentrate upon the depths. When they speak of us abroad, they mention only the low level to which this land has sunk. Our 'heights' are seldom mentioned even by those who ought to know better. All speak of our glorious past, but make little mention of our future. Our ancient days are spoken of with veneration while our youth is ignored. We have been dismissed as a 'dying' civilization for hundreds of years. Yet here we are, still very much alive. We would like to read in your journals of our hopes, our strength, our vitality. But the West accords us the respect reserved for the world's largest museum."

As we talked I became increasingly aware of the duplex power of his eyes. They were penetrative and hypnotic at the same time. They read my soul and ruled it. They extracted from my mind all its secrets and they compelled me to remain passive and receptive in his presence. He told me how the paths of men cross and criss-cross at the bidding of unseen forces, and how what appeared to be coincidences were likely to be pre-arranged links in a chain of causes destined to secure certain effects.

After I had told him of my woes and worries, he said, "The law of spiritual evolution is ever at work." Without a trace of vanity, he referred to himself as the Fakir-ul-Fukara, the chief of all Adepts, one who can freely function as a spiritual being while being apparently encaged in a physical body. I felt that what he said was true. Here was one of those rare gems of Eastern tradition-those almost unique Adepts who have shared the councils of the gods and are acquainted with a wisdom man is not yet able to learn. Something in this saint held my attention as steel filings are held by a magnet.

My initial perplexity slowly faded as his fascination gripped me ever more firmly. Now I was aware of an important change taking place in my mind. One by one the questions I had prepared in my hotel with such care were discarded. They no longer seemed to be of the least importance. Nor did solving the problems which had hitherto worried me seemed to matter, either. I felt a deep, steady river of serenity flowing through me. A great peace, the peace which has been described as 'passing understanding' was penetrating to the most inaccessible reaches of my being. It was for this that I had been born. Not to make films, nor to take part in revolutions. Questions which had tortured me now seemed irrelevant. Of what worth were Evas and idiots, blonde hair and pink bottoms, my poetry and my past. How petty loomed the panorama of my lost years. I surrendered to the deepening sense of restfulness. For how long I do not know, but certainly for not less than an hour. The passage of time provokes no irritations when the chains of mind-made problems have been discarded. Little by little, a new question established itself in my consciousness: 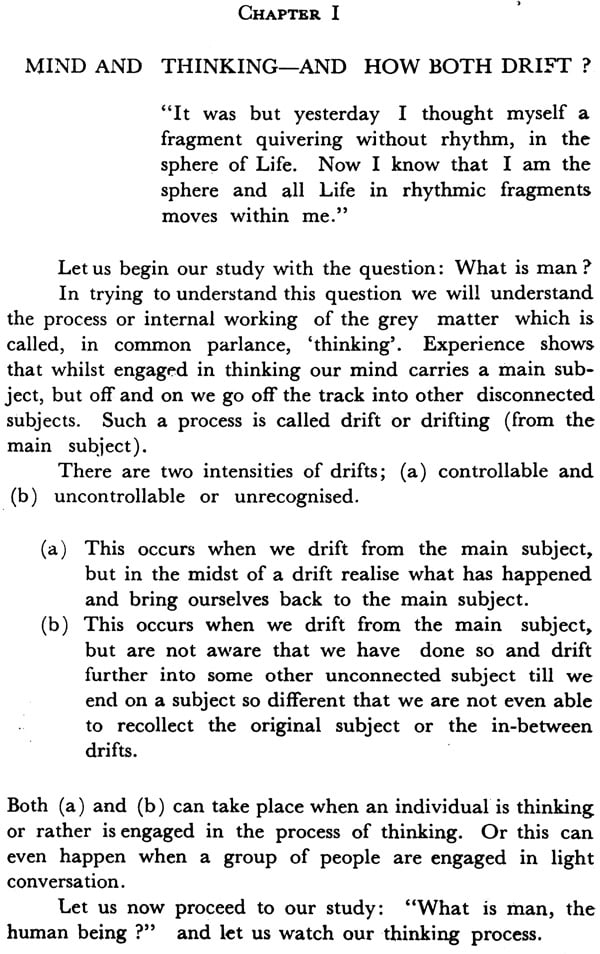 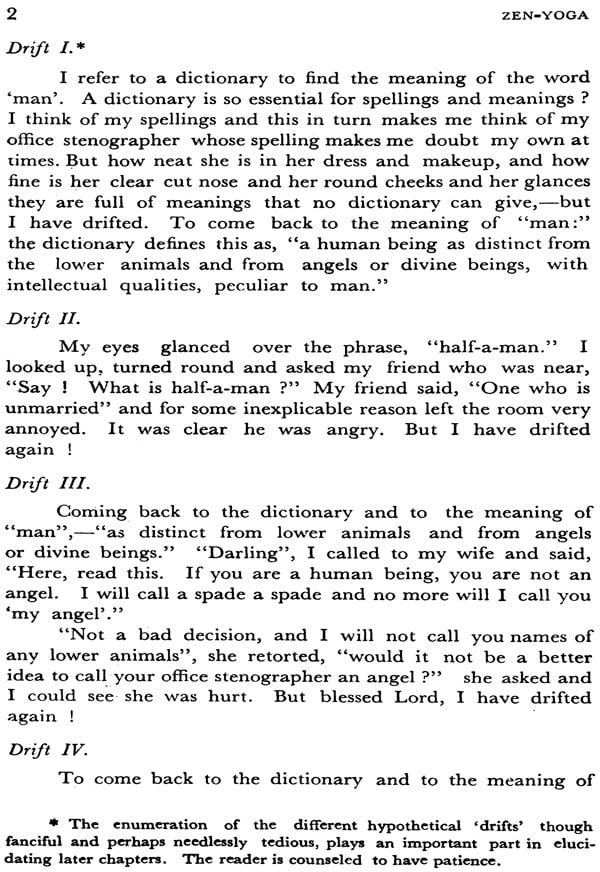 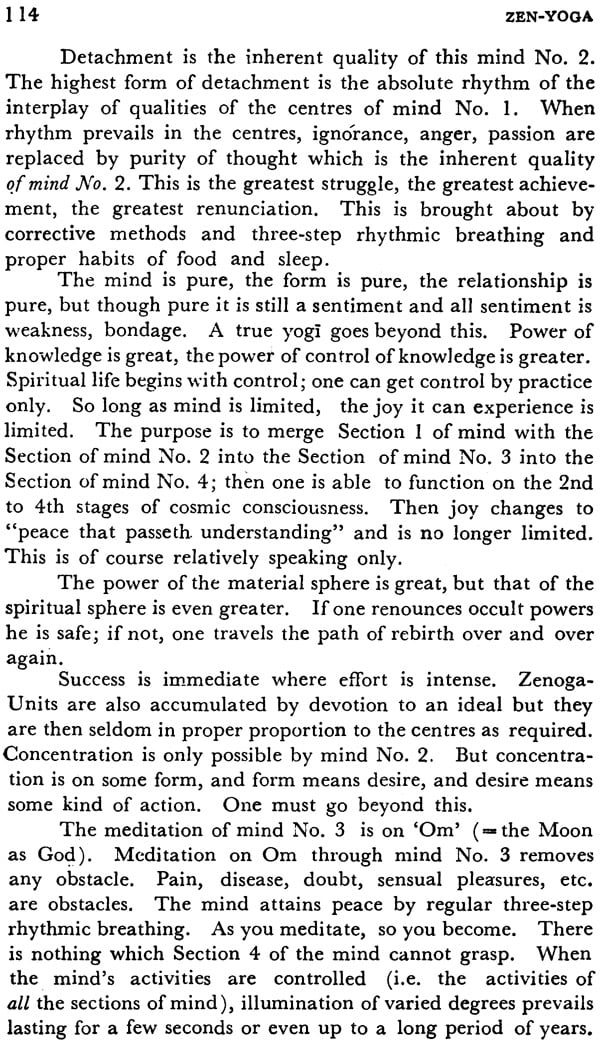 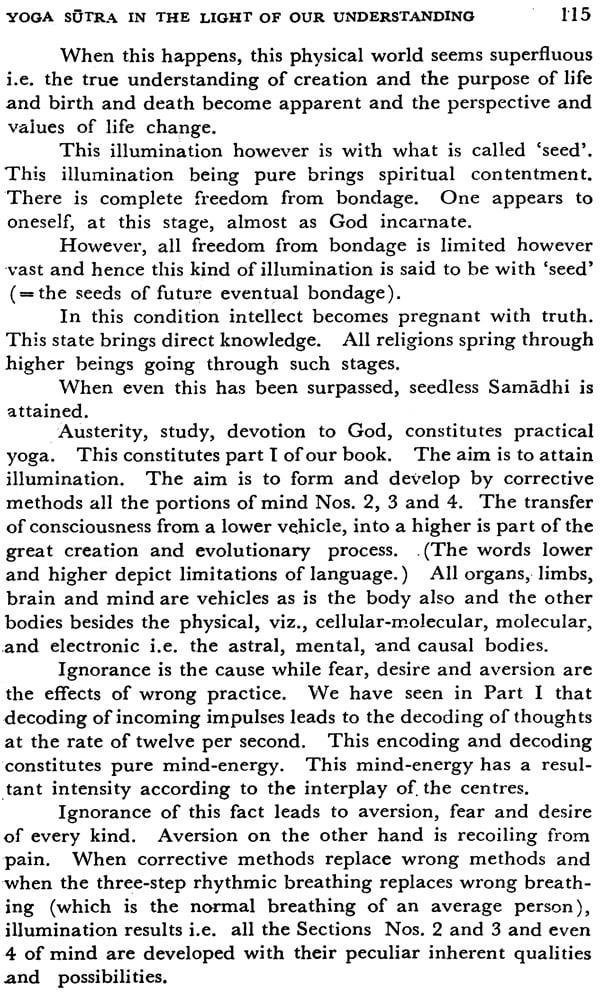 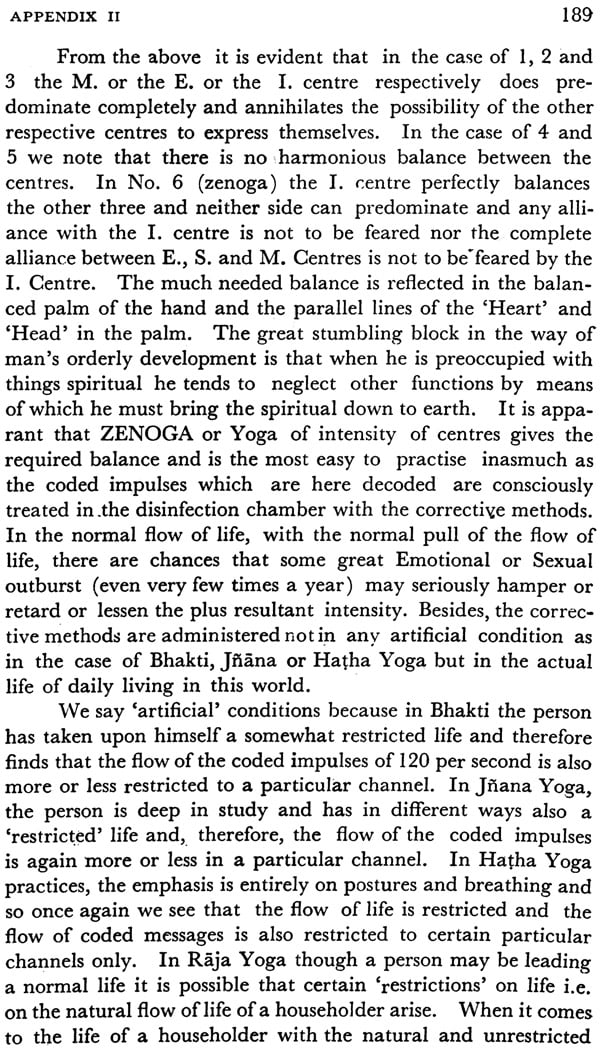 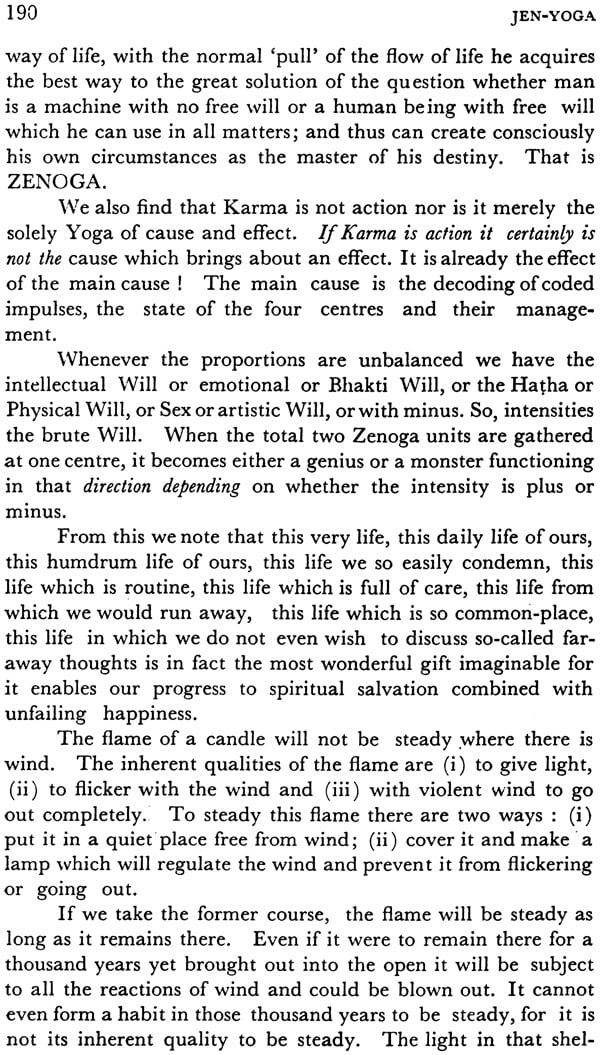 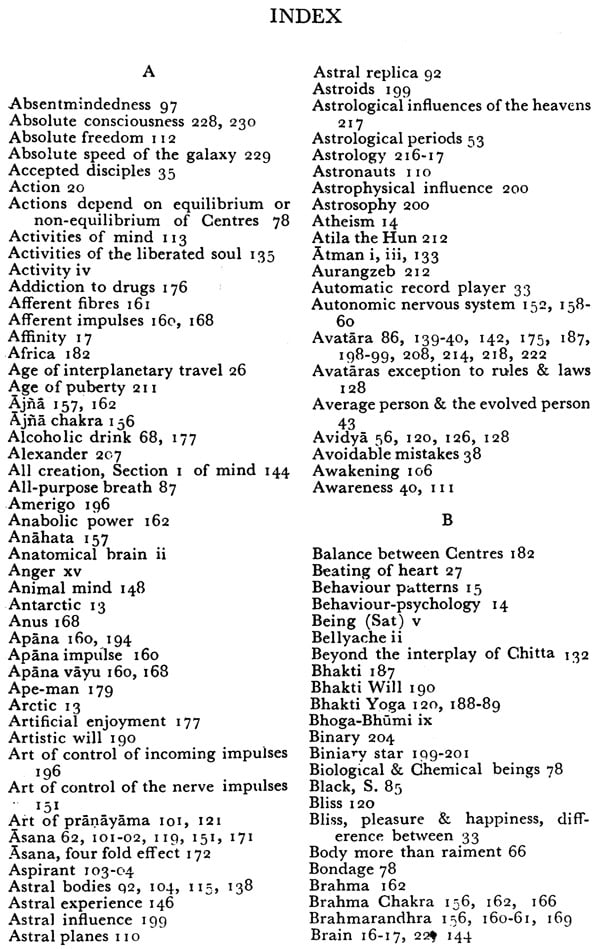 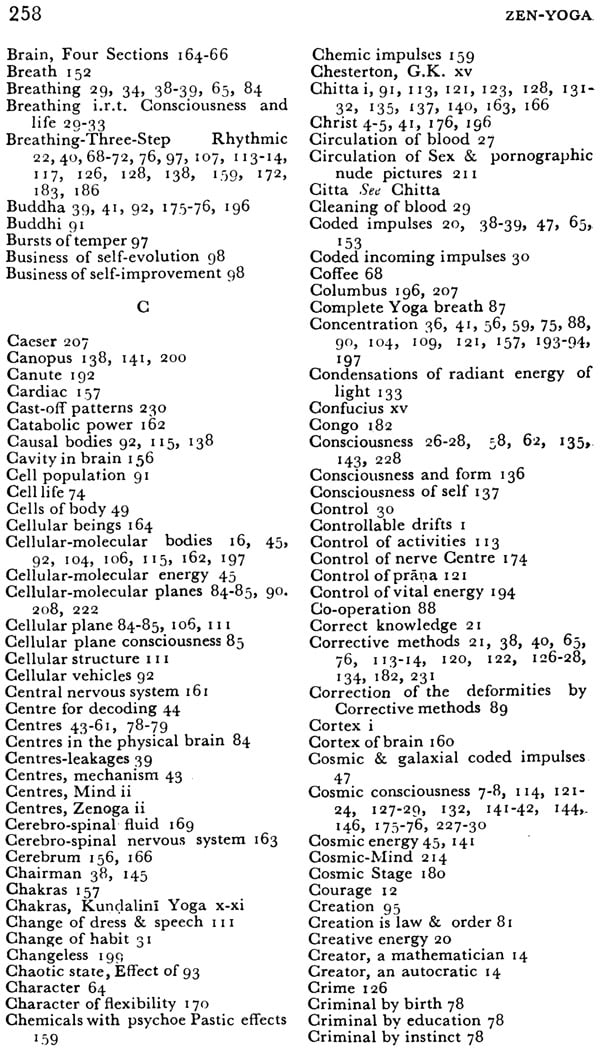