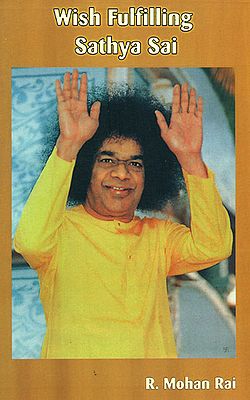 $20.00
Notify me when this item is available
Save to Wishlist Send as E-card Share by Email
About The Book

The book is a tribute to Sathya Sai Baba who is regarded by millions of his: devotees as an incarnation of the Divine. It contains the firsthand experiences of the author, as well as the divine experiences of other devotees. The book gives us an insight into the bliss and worldly gains that accrue as showers of Sathya Sai’s grace. That is why devotees worship him as the wish fulfilling God. The book also dwells upon the real mission of Sathya Sai, which is to spread love among men, and establish peace and human values on earth. Baba exhorts us to live our lives according to the five-point code of Sathya, Dharma, Santhi, Prema and Ahimsa. The simplicity of language, absorbing style of narration, the candid presentation of facts, make very interesting reading. One feels as ifhe is himself sharing the author’s experiences.

Radhey Mohan Rai was born into a family of litterateurs in 1939. He served in the Rajasthan Higher Education Service for thirty seven years and retired in 1997 as Vice Principal of Govt. Post Graduate College of Arts & Law, Alwar. He has been into creative writing since his youth and has written extensively both in English and Hindi. Reputed publishers of Delhi have published fourteen of his books—ten in Hindi and four in English. These include poetry, stories, novels and biographies etc.

Mr Rai was an office bearer in Sathya Sai Seva Organization for more than thirty years. He held several senior positions of responsibility such as state coordinator for Bhajan, seminars, public Meetings, Organizational Expansion as well as Financial Coordinator for Sri Sathya Sai college for women, Jaipur. At present he is member the of governing council of B. Ed College run by Sri Sathya Sai Trust, Jaipur. He has a rich repertoire of experiences to share with the readers of this book and may be contacted at anubandh@hot mail.com.

In his letter of 25th May 1947 Sathya Sai Baba wrote to his brother thus: "No one can comprehend my glory, whoever he is, whatever his method, howerver long his attempt." He was hardly twentyone and those words might have sounded audacious then. But over the next sixty years they have been proved absolutely true. For, despite many efforts none has been able to comprehend the mysteries and miracles of Sri Sathya Sai. In that very letter he also wrote: "I have a ‘vow’: to lead all who stray away from the straight path, again into goodness, and save them. I am attached to a ‘work’ that I love: to remove the sufferings of the poor and grant them what they lack. I have a reason to be proud, for, I rescue all who worship and adore me right." Those were brave words. Yet, over the years they have proved to he true. They, in brief, describe his mission. This book endeavours to describe how Sathya Sai Baba has been going along achieving his mission. Through our own experiences, as contained in this book, we try to measure the immeasurable.

Baba often says: "I am a silent listener to your conversation and an unseen guest at your table." I would go a little further so as to assert that he is verily the indweller of our hearts and minds and thus is fully aware of our feelings and thoughts. I cite a case here. In early March of 2006 terrorists caused an explosion in the precincts of the Sankat Mochan Temple of Varanasi. Some people were killed and quite a few wounded.

To avoid a backlash and with the intent of soothing frayed tempers the Dist, Administration of Varanasi organized a festival of music on the ramparts of the holy Ganga, Hindu and Muslim maestros rendered Ragas which form traditional Holi singing. A TV channel telecast the musical feast live. As I listened to the melodies and watched the captivating vignettes of Varanasi on TV a desire to be there and see the pious town and temples in person gripped me. This was around 10th or 12th of March, just before Holi. I did not mention my secret wish to anyone, not even to my wife.

On 2nd of April I received a telephone call from Shri Ramanand Tiwari, owner of Pilgrims Publishing, Varanasi, and we discussed the possibility of the publication of my book on Sri Sathya Sai Baba. We had a long conversation during which | casually mentioned that I had never been to Varanasi. Mr Tiwari very warmly extended me an instant invitation to come to Kaashi, be the guest of Pilgrims Publishing, and Stay at their guest house.

That, when not even the deal for publication of the book had been finalized. Was it not Baba, the silent indweller of my heart, playing out his role as the wish fulfilling divine?

It took more than a couple of months for things to be finalized. And, as this book goes into print I wait expectantly for news of its publication, hoping to be in Varanas} to receive its first few copies.

Many incidents recounted in this book are proof of the veracity of what Baba worte in that letter of 25th May 1947. [have tried to delineate how he has gone on to achieve his ‘task,’ fulfill his "VOW," accomplish his ‘work,’ and justify his being proud. Let us be part of his spiritual mission, for that will ensure our redemption.

I take this opportunity to express my sincere gratitude to Shri Ramanand Tiwari, owner of Pilgrims Publishing, for the publication of this book. Many thanks to Mr. Christopher N Burchett for taking pains to give a beautiful shape and form to the end-product. Thanks also to all other members of the publishing team. Pranams at the Lotus feet of Sathya Sai Baba for affording me the blessed opportunity to bathe in the River of Bliss. 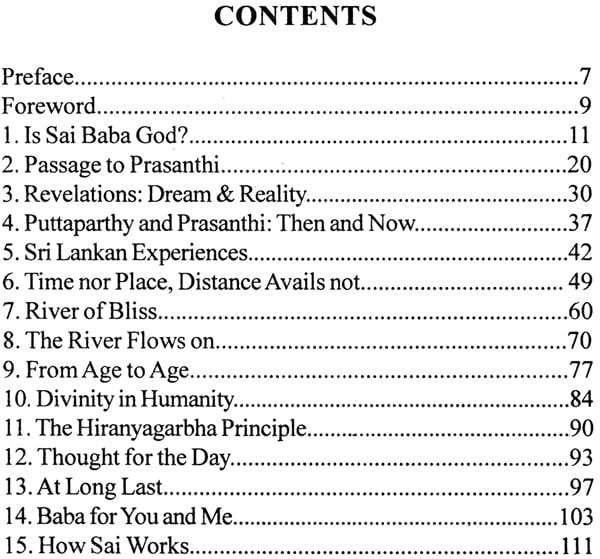 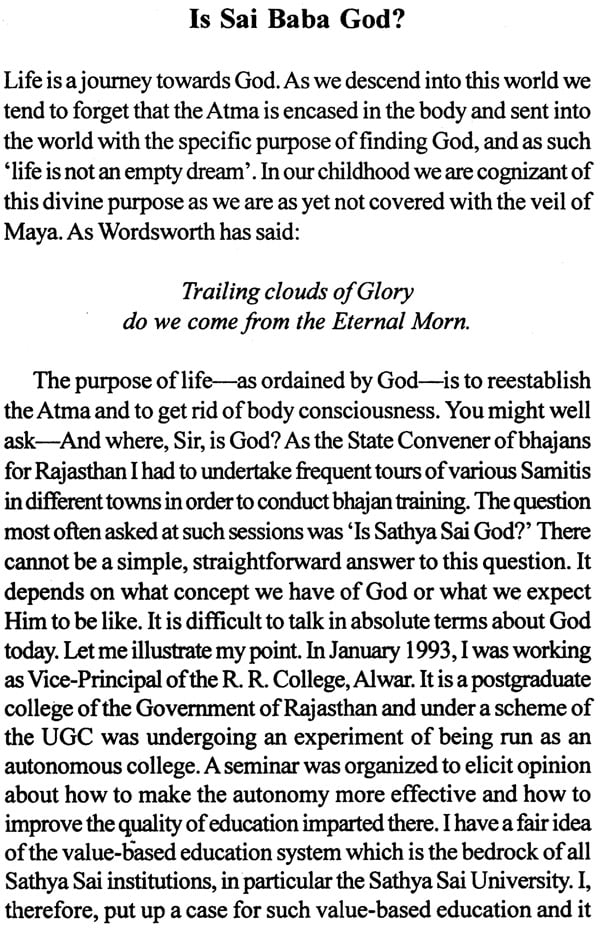 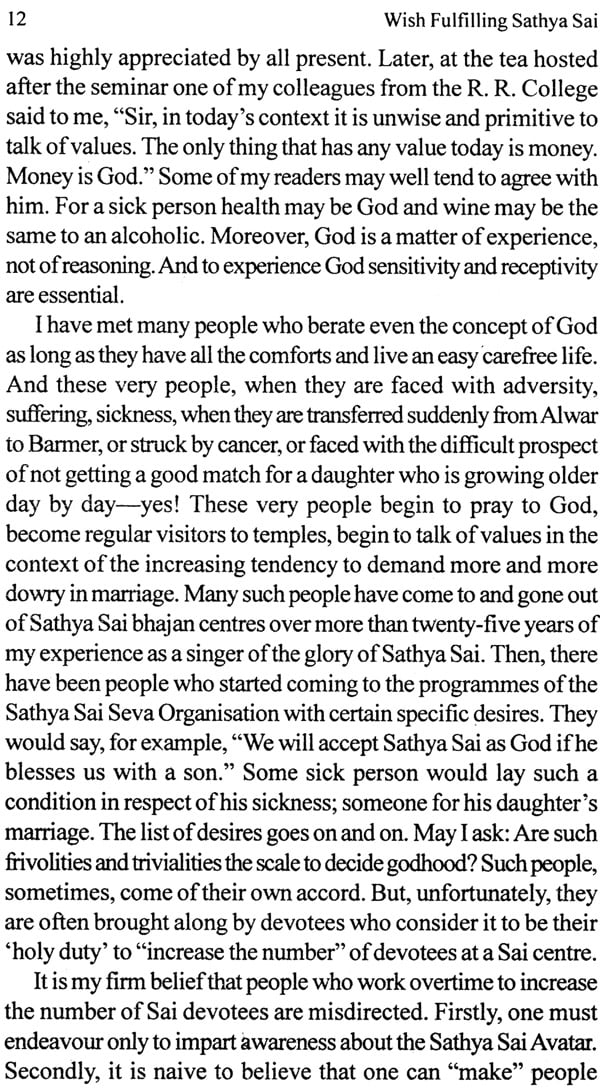 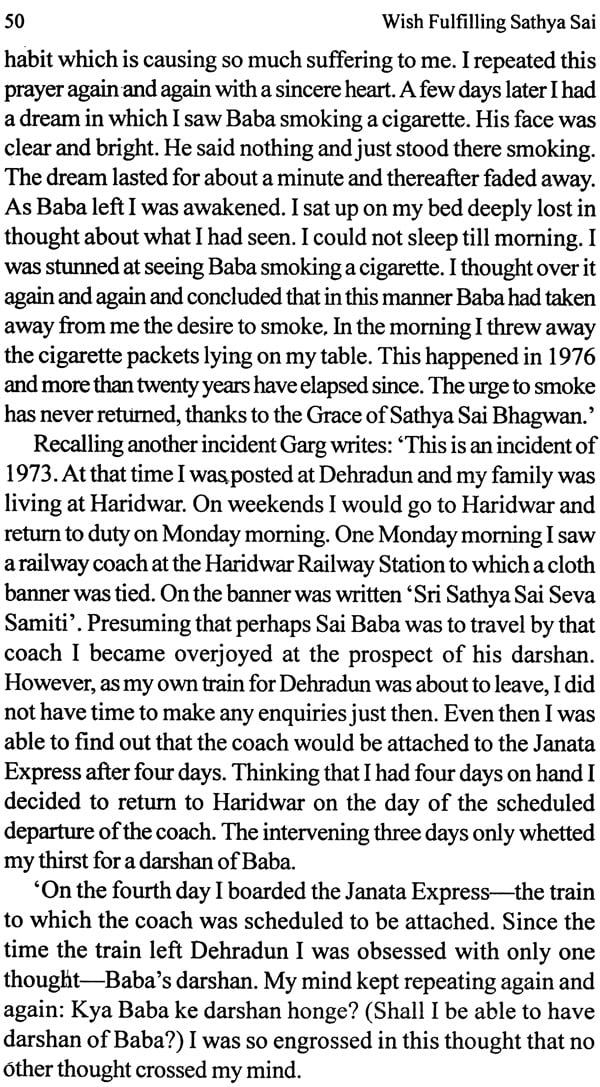 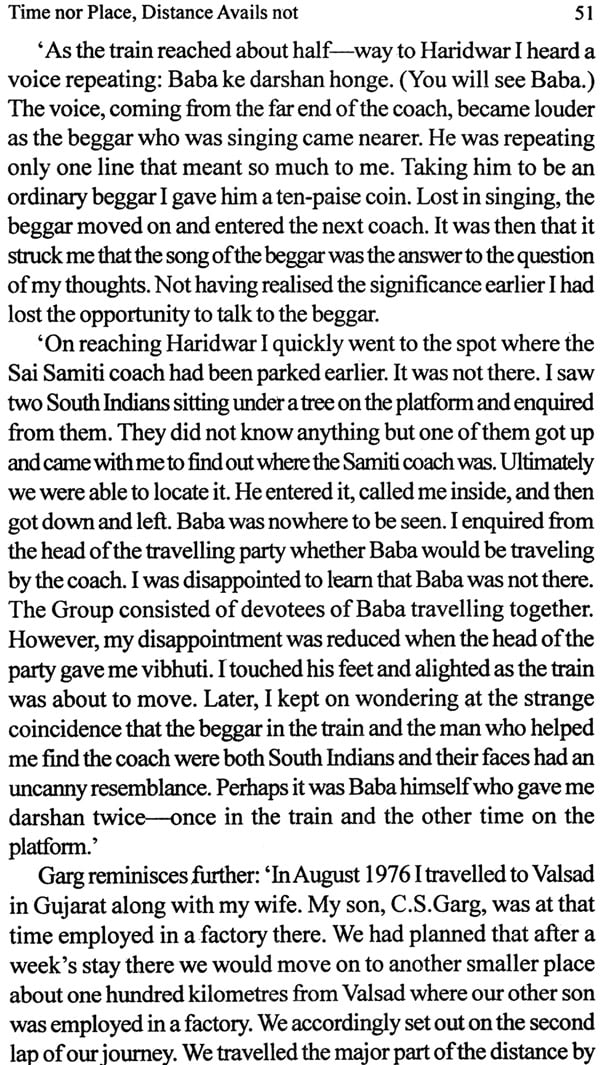 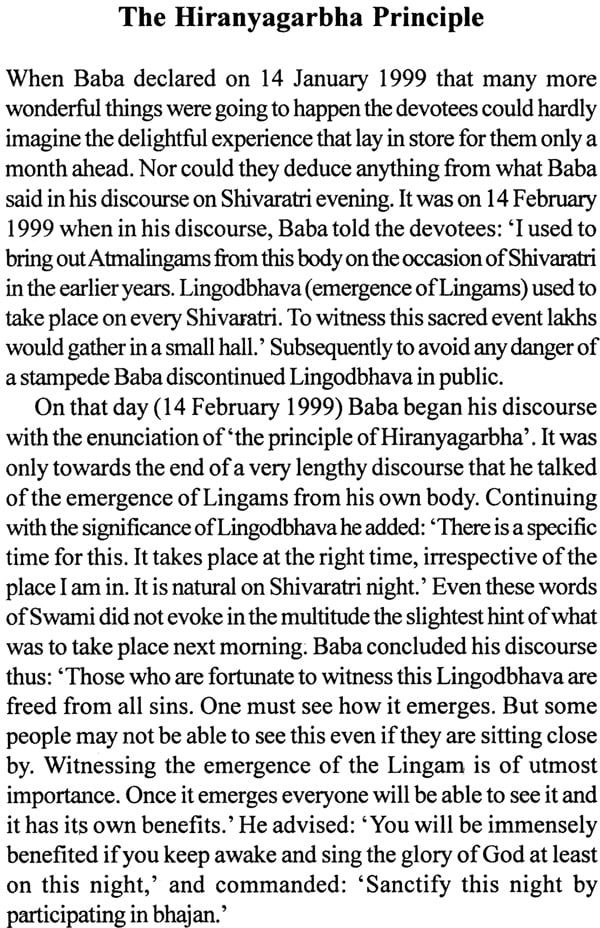 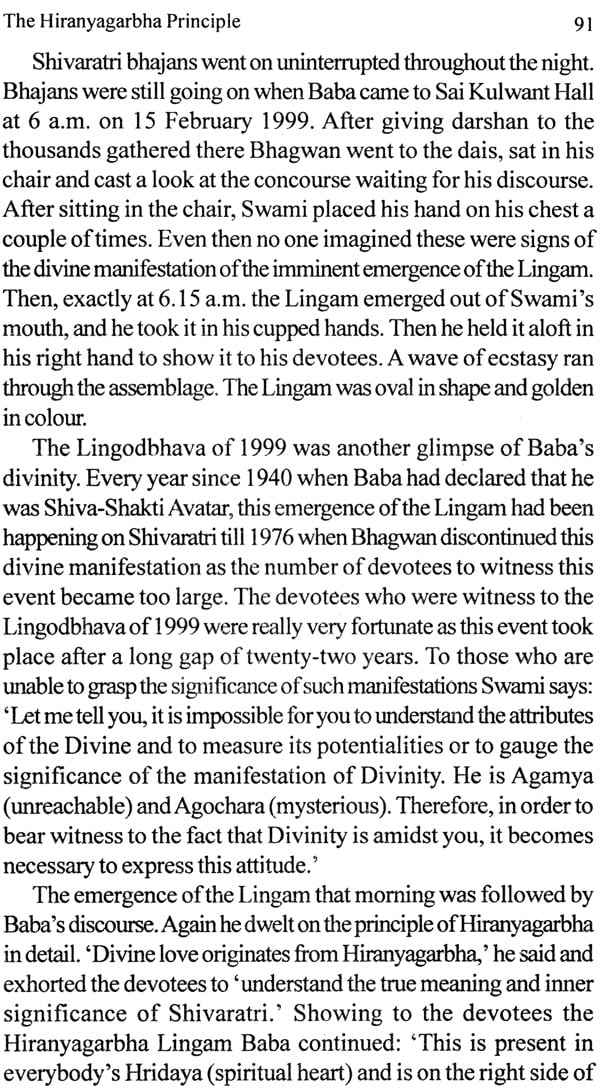 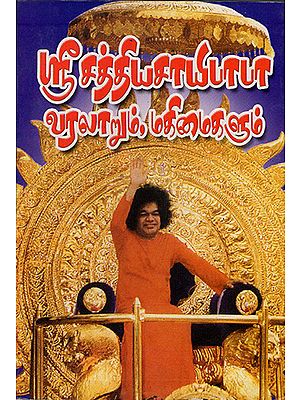 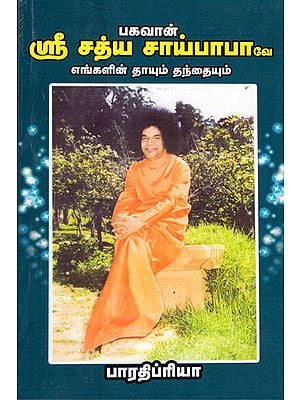 Sri Sathya Sai Baba is Our Parents (Tamil)
By Bhartipriya
$18.00 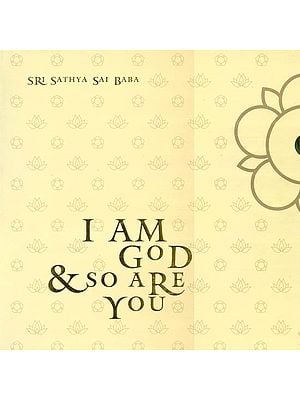 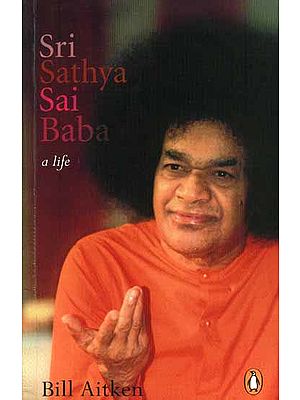 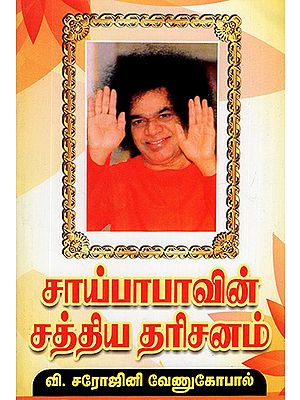 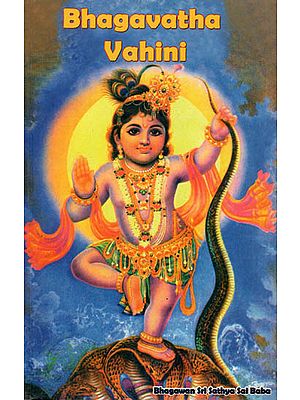 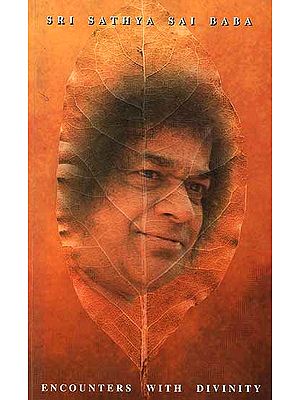 Premamruta Sagar of Radha (Radha's Ocean of Love Nectar): The Unique Tradition of Worship Through Amorous Sentiment from Sri Radha to Her Present Re-incarnation Vasantha Sai)
By Satya Pal Ruhela
$31.00

Unravelling the Enigma Shirdi Sai Baba in the Light of Sufism
By Marianne Warren
$30.00 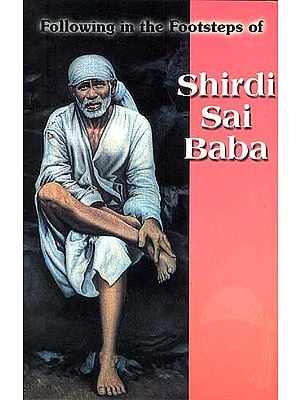 Following in the Footsteps of Shirdi Sai Baba
By Amrita Sharma
$6.00 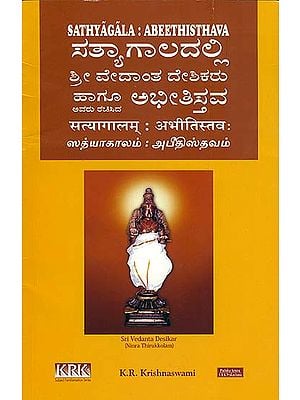 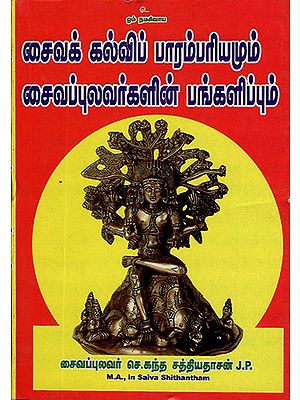