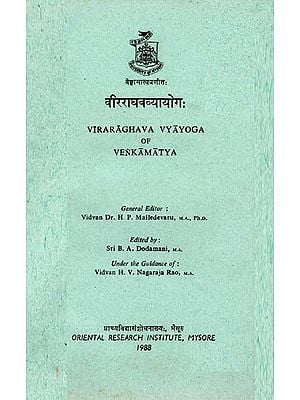 Pradhani Venkappaiah, alias Venkamatya, was a prolific writer of the 18 th Century. His profound scholarship and creative contributions to Sanskrit and kannada literature are well-known. He was a good administrator besides being a great poet and dramatist, His patrons were queen Veerammaji of Bidanur and Hyder Ali of Mysore. He rationalised the revenue collections of Mysore State and also fought in several battles successfully. We learn that he was very unhappy in his last days. Hyder Ali probaly did not like Venka ppaiah's growing influence. Hence, he sent him to a far off place depriving him of all his political and adminis trative powers. Amidst all this furore, Venkappaiah was able to concentrate his mind on studies of Sanskrit literature and philosophy.

Kavya is the generic name comprising all forms of poetical compositions in Sanskrit. Two species of Kavya are recognised: audiovisual (drsya) and aural (Sravya). Of the audio-visual again there are two classes; drama or Natya, and representation by gestures with a musical background or Nitta. Drama is the reproduction of certain situations so as to induce in the spectators a sense of identification with the hero and other characters by the way the actors render them. Composing a drama is an art of presenting a story in the forms of a dialogue. "The elements going to the make-up of a, play" say's Aristotle "consist of the fable, manners, diction, senti ments, decoration and music". "Thus drama is a literary piece written for representation on the stage. It is largely for a theatre and the theatre is a place where people meet to hear the dialogue and to see the action of the play or representation by actors.